Why Does John Kerry Make Me Think of This Guy?

Obama's secretary of state John Kerry says there exists "undeniable" evidence of a recent chemical weapons attack in Syria.  Of course he's not actually saying it was the Assad government behind the attack.   There are plenty of Bad Actors afoot in Syria who might have been willing to do some pretty horrific things to drag the West in against Assad.    So, when it comes to establishing casus belli, undeniable isn't quite the same as conclusive.

And then there's this guy who also came forward with proof positive of weapons of mass destruction.   Oh yeah, he was a secretary of state too.   Don't they say the damnedest things?  What was this guy's name?  Slam Dunk, was that it? 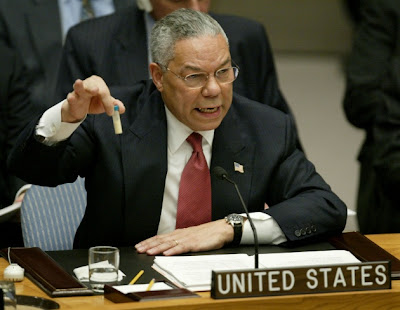 It's a pretty messy situation. It seems clear that there WAS a chemical attack

but it's all a little convenient.

Gad people get to be pretty goddamn insane with a little power. Whoever is responsible, whether it was orchestrated, whether it was Assad, it's insane all of it. All of them.

I guess it's situations like this that should hopefully reinforce in everyone the fact that a society that does not allow for such concentration and disparity of wealth/power is precisely what we should be working towards.

Interesting take, Anon. Yes, it seems apparent that a chemical attack of some unidentified type occurred. Whatever it was doesn't appear to be a known choking or nerve agent. It's unclear why Assad, who seemed to have the rebels more or less at a standstill, would have invited international military action for no obvious gain.