Forcillo was Eight for Nine 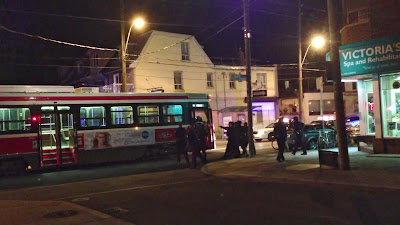 That Sammy Yatim was range practice for his executioner, constable James Forcillo, is apparent from the autopsy findings.  Forcillo emptied all nine-rounds from his gun.  Eight times his bullets found their target, Sammy Yatim's body.

Eight hits in the course of firing lasting 13-seconds.   You rarely see anyone firing that fast at a shooting range.  You also won't see shooters that close to their target at a firing range.  What's the point?

Stationary shooter, stationary target, short range, eight for nine.  That's not suspect down.  It's suspect done.
Posted by The Mound of Sound at 8:37 AM

What is really troubling now is that he is free on parole. He is suspended with pay - he gets paid for doing nothing other than killing an innocent man. Will justice be done in this case? I have my serious doubts.

We need to understand that, with an 8 for 9 outcome, Forcillo hit Yatim with no fewer than two bullets of his first three-round salvo and there's a very high likelihood he hit with all three.

This wasn't some burly lumberjack dressed in heavy clothes. No winter coat. Just a T-shirt on a skinny kid.

I don't think round one was justified. The police were present in numbers. They had every means to contain and control the scene. Forcillo and his wingmen did not have to be that close to the bus. If they felt unsafe they could easily have stepped ten feet back and still kept control over the scene.

Yatim had no means of escape except through the bus doors. There is no sign he was trying to bolt and there were ample officers present to cordon off the bus.

There was no need to shoot within the first couple of minutes. They could have and should have simply kept Yatim confined until properly trained officers with non-lethal means of subduing Yatim could arrive.

Forcillo chose to fire. No one else was heard egging him on. There was no screaming or panic discernable in the other officers. He chose to fire each of those nine rounds. He chose to stop after the first three. He chose to resume firing the remaining six rounds in his weapon five seconds later.

I think Forcillo's biggest legal problem is that CCTV video, the black and white video, that looked down into the bus. It revealed Yatim's legs and torso writhing with each of those final shots. That demonstrates that Yatim wasn't killed with the first volley, something that seems to be corroborated by the second officer who finally boards the bus and tasers Yatim.

As I pointed out earlier, that 5-second pause between the first three shots and the final six rounds is hugely significant. It's far easier to argue perceived threat and justifiable defence for those first three rounds. It's all but impossible to pull that off for the final six. What the defence needed most was the ability to argue that Yatim was probably dead from those first three shots. That would make the final six wrong but not murderous. However Yatim was still capable of writhing to the end so that defence, possibly their last, best defence, is lost.

Assuming that Fast Gun Forcillo was using a .45 or 9 millimeter, I would think at such close range, even a corpse would twitch upon impact - not that that makes anything better.

Mound, thanks for elaboration. I agree with you.

There is no other way to see this event that an very plain act of murder. But we shouldn't let them simply use this officer as a scapegoat for a police culture of extreme violence and racism. They recruit psychopathic killers into the police forces and then act surprise when they act out. As far as I am concerned anyone (particularly a person of colour) who is being chased by the police in TO should use lethal force to defend themselves because history demonstrates that they are very likely to be killed themselves.

Everybody has forgotten that there was a whole streetcar full of hostages. They were allowed to leave unmolested. This does not seem to be the act of a dangerous man.

Kirby, I found it troubling when, in the wake of the Yatim execution, top cops came out and said the killing was "by the book." Their line was: once a cop begins shooting, he keeps shooting until there is no longer a threat.

Obviously if it's a charging lumberjack swinging an axe the officer must continue firing until the guy is down and the officer is no longer endangered. Yet to hear a "use of force" instructor apply that rule to this shooting suggested a systemic failure in the police service including its training establishment.

Rumley - your point is right and it does go to the reasonableness of Forcillo's decision to fire his first round. It was his, and every officer's job, to evaluate the scene including the degree of threat posed by Yatim. And, on the last point, it clearly was "not much."

I want to know why all those other cops within just feet of Forcillo did nothing to stop him from executing this young man? Why are they not up on charges? They were on the clock, logging pensionable time. They had a duty to protect life, including Yatim's and yet they did nothing while Forcillo took his time emptying his service weapon into that kid's body.

.. we may find the testimony of Officer Forcillo and the many expert (police) and non expert (civilian) witnesses at the scene .. astonishing..

.. the basis of the charge and the legal criteria for judge or jury or ourselves re 2nd degree murder, re guilt or innocence may also be astonishing !! But realistically, it is very clear and very informative. The term 'beyond a reasonable doubt' will be heard a lot.

.. recorded video from the onboard TTC cameras will certainly be incendiary.. and tragically.. horribly.. graphic.. and will likely bear out the pathology reports.. reinforcing and illuminating them..

.. allow me to be among the first to declare, that Officer Forcillo's successful defense.. and possibly, the truth.. will be that he fired his gun involuntarily, unaware that he was tightening his grip while feeling threatened or squeezing the trigger due to obvious stress. And after the first shot.. (which may have missed its target, or may have been fatal or contributing to death) the rest (8 shots) were fired in a near catatonic state of shock.. adrenalin and fear.. and trained instinct. In the 'fog of action' so to speak.

.. why Forcillo 'assumed command' at the scene.. or why other officers did not.. may be very revealing. Were they a leaderless group of 10 or 12 or more? Unsure of how to deal with a drunk or stoned or very disturbed young man ? Did they speak to each other ? Did any of them speak with or to Officer Forcillo prior to, or during the shooting? Did any speak to or question Officer Forcillo after the shooting ? What was his behavior ? Did he say anything ? If so, what exactly did he say ? Did he reload his gun ?

.. why did an officer who arrived taser Mr Yatim with a 'conductive energy device'? Did this senior officer or sergeant on seeing Yatim was down realize he been shot numerous times? Was this tasering after shooting, approved protocol ? That seems bizarre. Was this somehow an attempt to revive him? Of the gunshots he had been hit with, how many might have been fatal? Was he still breathing or had a pulse when he was tasered? How many shots passed through him, if any ? Where did the single bullet that missed, end up.. or was it searched for ? Did any shots hit Yatim in the sole of a foot as he lay on the floor? In one of the videos we can hear CPR being administered after the shooting ! By whom ? Why ?

.. I've made the point in other online venues/blogs that young Mr Yatim was responsible for his own safety and his public behavior. We all are.

.. it may be cruel to point out that he was simply one half of a collision looking for the other half.. and he met it in Officer Forcillo, tragically .. on a streetcar. Sadly, he was out of control.. to the point of exposing himself to female passengers.. which is very significant.. and begs the question, why ? Under what influence ? And who contributed to this behavior ? Was he in a bar.. became impaired, did he purchase drugs ? Or leave home with alcohol or drugs or under some duress ?

.. do I like the end result.. a wild fatal shooting, nine high calibre shots up into a streetcar with the likelihood of missed or exiting or ricocheting rounds hitting apartment residents or onlookers or other officers or the street car driver or passengers who had exited the car ? No .. certainly not

.. let's see this case into the courts.. let the facts emerge.. weigh the evidence.. measure the response.. perhaps we will learn something or change something.. perhaps not.. But we don't to my recollection, dish out judgement or perceived justice prior to thorough investigation, sharp analysis of testimony and evidence.. and the power of clear headed society and appointed judge or jury..

I'm betting this will never get to trial, Sal. They'll plea bargain it down to manslaughter and a 6-months deal on time.

The local and provincial pols will continue to be bitches for the Toronto Police Association and, by the time Forcillo is out and working as a rep for the TPA, it'll be back to business as usual.

The Youtube video and audio recording
is bedrock witness to the event .
if you can call a young man being shot 8 times
with a policeman's service pistol
at very close range.. an 'event'

This goes to trial on the evidence & testimony
and on the power invested in the police
and their 'in the moment' interpretation or reaction
to dire personal threat, and/or the public at risk

1 shot, 3 shots, 9 shots .. won't matter
This case will center on whether Officer Forcillo
felt (beyond a reasonable or provable doubt)
that he himself or others were at risk from a knife wielding man
and he confronted the situation, as best he could in the moment,
as a duly appointed officer of the law

Why a police officer supported by 10 to 20 of his fellow officers felt so threatened is not really pertinent to the case.
If he says he felt threatened..
no jury will say he could not have felt this way

Last time I was in a similar situation..
I felt threatened..
I wrapped my down jacket around my right arm and grabbed a bar stool with my left hand.. Fortunately, the knife wielding assailant was unaware of the Kansas City Rules of Fighting.. was all talk..
a yakkity yak posing tough guy.. and he went down quickly and hard from a single punch to the nose from the bar manger, Dale.. while telling everyone how many fights he'd been in and how dangerous he was ..

But, Sal, you're looking at this as a legal matter. This is a criminal case, sure, but it has even greater political dimensions. The parties or stakeholders in this are the City of Toronto, the Province of Ontario, the Toronto Police Association and Forcillo. That invites a "go along to get along" disposition which means, if at all possible, no trial.

I doubt Forcillo would want to leave his fate up to a sympathetic jury. He might if it was just the two cellphone videos he had to contend with. But there's also the third video, the CCTV recording, that's more problematical and, as you've suggested, some onboard bus video possibly.

We'll know more when the date for the prelim nears.