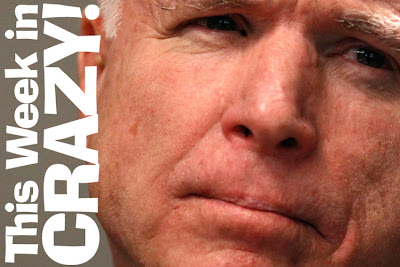 It's kind of embarrassing to watch an old man come to some realization, like suddenly noticing his zipper is undone.  It's a surprise to him and he assumes it's a surprise to everyone else.

John McCain is having a lot of those moments these days.   The latest is his realization that his United States has lost all credibility in the Middle East.

Yes, John.  Right you are, John.   Only Egypt had very, very little to do with it.   That's been going on since 1953.  Maybe you haven't read the papers, John, but your Central Intelligence Agency has just confessed what everyone else has known for decades - it orchestrated the 1953 coup to overthrow the democratically elected government in Iran.  Your country invited Pahlavi to sit on the Peacock Throne and ushered in decades of murderous brutality doled out lavishly by his secret police, the dreaded Savak (trained by Norman Schwartzkopf's dad) who made the Gestapo look like Girl Guides.   That might come as a surprise to you, John, but every Muslim has known all about it for - well, it's 60-years now.

And your role in enabling Israeli excesses for all those decades, that's undermined America's credibility too.  And your support for Mubarak, the House of Saud and every other tinpot despot in martial uniform or flowing robes, that hasn't helped much either.   And then Afghanistan and Iraq - those fiascoes pretty much were the icing on the cake of America's remaining credibility in that region.

At this point, John, Egypt is just a drop in the bucket.  America has played Sunni off against Shiite so many times and so incoherently that it's hard to keep track of which side you're backing, where and when.  And John, remember when you ran against Barack and couldn't tell a Shia from a Sunni or, for that matter, which side was al Qaeda's and which was Iran's?

So, John, stop embarrassing yourself.  It's time to head back to Arizona, pour yourself two fingers of single malt and kick back.  You're just not making sense any more.
Posted by The Mound of Sound at 11:31 AM