Three Centuries of Drought Brought Down the Cradle of Civilization 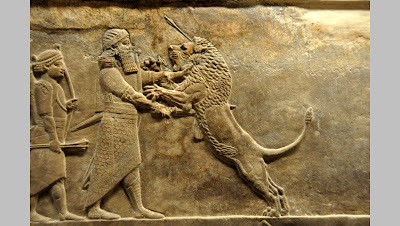 French archeologists believe they have discovered the true cause of the collapse of societies in Egypt, Turkey, Greece and the Middle East three thousand years ago.  Until now this was attributed to the invasion and conquest by the "Sea People."  The French researchers claim it was actually due to a 300-year drought that hit the Mediterranean.  Their conclusion is that it was climate change, not sea people, that destroyed those civilizations.  From The Australian:

Historians have blamed the simultaneous breakdown of societies in Egypt, Turkey, Greece and the Middle East on mysterious invaders known as the “Sea Peoples”. But research published today in the journal PLOS ONE suggests a 300-year drought was responsible.
The researchers analysed pollen grains from sediments in a salt-water lake in Cyprus, and radiocarbon data from an ancient trading centre in modern-day Syria. They found evidence of a sustained drought and increasing salinity which wiped out woodlands, destroyed agriculture and silted up ports.
This corroborated ancient “textual evidence” including cuneiform tablets and correspondence between kings.

The records suggested a “drought-induced socioeconomic crisis” had precipitated the simultaneous collapse of Egypt’s New Kingdom, the Mycenaean culture in Greece, the Hittite civilisation in Turkey and the Canaanites to the south, 3200 years ago.

The paper says invasions were not the root cause of the collapse. Rather, the Sea Peoples were displaced by the same drought afflicting their more advanced counterparts.

“The crisis was a complex but single event where political struggle, socioeconomic decline, climatically-induced food shortage, famines and flows of migrants intermingled.”

Interesting reading. I wonder when the modern day 'Sea Peoples' will arrive. I'm sure the pentagon is already working on a plan for that.

In a way, you're right. One problem the Pentagon is focused on is staunching what it believes will be a tsunami of climate change refugees out of Central America. They have plans to fortify the land border with Mexico but realize they will have to take similar measures to prevent the onslaught of boat people.