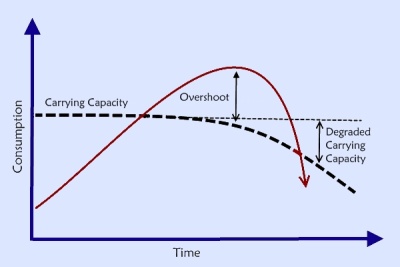 Tuesday, August 20, marks Earth Overshoot Day for 2013.  This is not a record to celebrate.  It tells us that, in under eight months, mankind exhausts an entire annual supply of renewable resources.  After that, we're eating our seed corn.   Another way of looking at it is that, at current rates of biomass consumption we need 1.5 planet Earths.

Now you might be asking yourself how mankind could possibly be using up more renewable resources than the Earth can provide?  The answer is we're very good at it or very bad at it.

Biomass provides us the stuff we consume.  It also absorbs and cleans the contaminants we create.   On both counts we're running a rather huge environmental deficit.   This can be seen to the naked eye from the space station in forms such as desertification, the exhaustion of arable land and its transformation into sterile desert, and deforestation or the growing problem of agricultural runoff spilling from coastal estuaries causing ocean dead zones.  Satellites can detect surface subsidence caused by our rapacious depletion of groundwater resources - aquifers.  It's also manifested in collapsed global fisheries.   Less visible are the increasingly contaminated land, air and water resources.

There are just a few countries, a bare handful, that haven't yet crossed into ecological deficit.   Canada, thanks only to our relatively small population, is one of the few.  We have a chance to keep it that way but it will take a conscious decision, planning and perhaps some sacrifice to make that happen.  Time is not on our side.

If you want a clear idea of where Canada and the rest of the world stand on overshoot, go to the Global Footprint Network website.  While they're a scientific think tank, their research is presented for lay visitors.  Their goal isn't to scare you senseless.  That would be self-defeating.  What they seek is to make our planet's finite limits central to our planning and thereby regain our ability to live within those limits.  It's a laudable mission statement but it's an even bigger reach than the goal of decarbonizing our global economy. Still it's not "pie in the sky" to use this research to realize where Canada stands, what we stand amidst, and how we need to plan our future.

Overshoot is the harbinger of ecological collapse.   As the graph above depicts, consumption (the red line) continues to increase even as the Earth's carrying capacity, it's ability to replenish renewable resources, falls into decline.  Eventually consumption peaks due to the exhaustion of renewables and it plummets while overtaking even the diminished available carrying capacity.

Consumption today continues to increase.  The Earth's carrying capacity, signified by the advancing arrival of Overshoot Day, is already heavily in decline.   Just five or six years ago, Overshoot Day fell in October.   Now it's well within August.  With the expansion of middle class consumerism in India and China, where will Overshoot be five years from now?