Charting America's (And Our Own) Descent Into Madness

He's one of the most under-celebrated sages of this era but that doesn't stop American Henry Giroux from dispensing invaluable pearls of wisdom and insight.  He currently is Chair in English and Cultural Studies at McMaster.  Perhaps from Canada he's able to more clearly chart his native land's descent into madness. 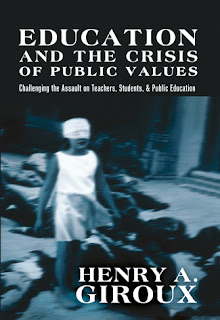 America is descending into madness. The stories it now tells are filled with cruelty, deceit, lies, and legitimate all manner of corruption and mayhem.  The mainstream media spins stories that are largely racist, violent, and irresponsible —stories that celebrate power and demonize victims, all the while camouflaging its pedagogical influence under the cheap veneer of entertainment. Unethical grammars of violence now offer the only currency with any enduring value for mediating relationships, addressing problems, and offering instant pleasure. A predatory culture celebrates a narcissistic hyper-individualism that radiates a near sociopathic lack of interest in or compassion and responsibility for others. Anti-public intellectuals dominate the screen and aural cultures urging us to shop more, indulge more, and make a virtue out of the pursuit of personal gain, all the while promoting a depoliticizing culture of consumerism. Undermining life-affirming social solidarities and any viable notion of the public good, right-wing politicians trade in forms of idiocy and superstition that mesmerize the illiterate and render the thoughtful cynical and disengaged.   Military forces armed with the latest weapons from Afghanistan play out their hyper-militarized fantasies on the home front by forming robo SWAT teams who willfully beat youthful protesters and raid neighborhood poker games.  Congressional lobbyists for the big corporations and defense contractors create conditions in which war zones abroad can be recreated at home in order to provide endless consumer products, such as high tech weapons and surveillance tools for gated communities and for prisons alike.

The issue of who gets to define the future, own the nation’s wealth, shape the reach of state resources, control of the global flows of goods and humans, and invest in institutions that educate an engaged and socially responsible citizens has become largely invisible.  And yet these are precisely these issues that offer up new categories for defining how matters of representations, education, economic justice, and politics are to be defined and fought over. The stories told by corporate liars and crooks do serious harm to the body politic, and the damage they cause together with the idiocy they reinforce are becoming more apparent as America descends into authoritarianism, accompanied by the pervasive fear and paranoia that sustains it. 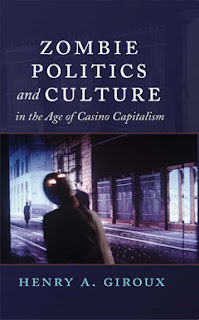 ...The stories we tell about ourselves as Americans no longer speak to the ideals of justice, equality, liberty, and democracy. There are no towering figures such as Martin Luther King, Jr. whose stories interweave moral outrage with courage and vision and inspired us to imagine a society that was never just enough.  Stories that once inflamed our imagination now degrade it, overwhelming a populace with nonstop advertisements that reduce our sense of agency to the imperatives of shopping. But these are not the only narratives that diminish our capacity to imagine a better world. We are also inundated with stories of cruelty and fear that undermine communal bonds and tarnish any viable visions of the future. Different stories, ones that provided a sense of history, social responsibility, and respect for the public good, were once circulated by our parents, churches, synagogues, schools, and community leaders. Today, the stories that define who we are as individuals and as a nation are told by right-wing and liberal media that broadcast the conquests of celebrities, billionaires, and ethically frozen politicians who preach the mutually related virtues of the free market and a permanent war economy. 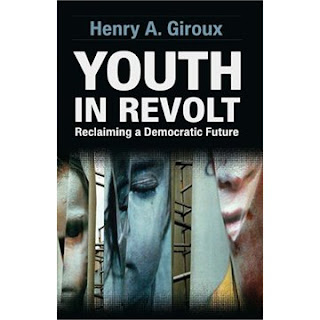 ...All of these stories embody what Ernst Bloch has called “the swindle of fulfillment.” That is, instead of fostering a democracy rooted in the public interest, they encourage a political and economic system controlled by the rich, but carefully packaged in consumerist and militarist fantasy. Instead of promoting a society that embraces a robust and inclusive social contract, they legitimate a social order that shreds social protections, privileges the wealthy and powerful and inflicts a maddening and devastating set of injuries upon workers, women, poor minorities, immigrants, and low- and middle-class young people.  Instead of striving for economic and political stability, they inflict on Americans marginalized by class and race uncertainty and precarity, a world turned upside-down in which ignorance becomes a virtue and power and wealth are utilized for ruthlessness and privilege rather than a resource for the public good.

It is genuinely painful to read this, mainly because it is so true and because the social contagions of America eventually spread north.   Our FinMin, Jimbo "The Gnome" Flaherty, entertains top Canadian CEOs at a retreat every summer where they deliver their wish lists that are invariably anchored on the notion of staying competitive with the Americans which is a twisted form of "keeping up with the Joneses."  If America shreds its social safety net, so too must Canada in the name of remaining competitive.  If America skews its tax code to the benefit of the richest of the rich, so too must Canada in the name of competitiveness.  If America tolerates rampant inequality, so too must Canada.   As long as it's masked in the guise of competitiveness it is just and right somehow.

We need to see it as a lung cancer patient persisting in a pack-a-day habit.  Should we then take up a pack-a-day habit  - in the name of competitiveness, of course?   Yet this is what appeals to our social darwinist prime minister's every instinct.  It is the rancid marrow that fills his bones.

Would that Henry Giroux was writing policy for Tom Mulcair or Trudeau the Lesser.   For we need minds like Giroux's to inform our political conscience, to rehabilitate our collective sensibilities. We need every Giroux we can find that we might finally wake up to the war that is being waged against us and understand what we can and must do to fight back.
Posted by The Mound of Sound at 11:23 AM

The swindle of fulfillment." And we're headed in the same direction.

Hi Owen. Having been baptized in Hedges et al, I'm beginning to move on into areas such as Herman Daly and Steady State economics.

Like you I have wondered what we're going to do, how we (or in reality our children) are going to throw out this predatory corporatist system, the oligarchy that has supplanted democracy.

Fortunately there are great minds like Giroux, Paul Craig Roberts and Gar Alperovitz who have delved into our intolerable problem and have done much of the legwork. They reveal how we can, and eventually will have to, reinstate progressive democracy.

Giroux, speaking of the American situation, warns that this sort of reform is not to be achieved within our existing political parties. It can only take hold from the ground up by incrementally replacing the existing structures and institutions that have served us so poorly since the advent of Reagan/Thatcher/Mulroney.

There's a welcome positivism in their writing for they posit progressive democracy not as a possibility but as an inevitability.

I'm just starting with Alperovitz' "What Then Must We Do?" a title he borrowed from Trotsky. For an academic he chose to write this in a very conversational tone and, so far, it makes for relaxed reading. By contrast, Giroux, for the incredible power of his writing is awfully intense.

This sure is a suiter.

There are no great minds, only great stories. And the truth will be told in those stories.

I don't know what to say. Anon 3:11 - to me a "suiter" is a piece of luggage. To Anon 3:35. It's unfortunate you haven't encountered any great minds. Hint - they're the people who write the great stories.

Mound of Sound 4:16 - you are hilarious (It Really Weirds Idiots Negatively).

" It is the rancid marrow that fills his bones."

Brilliant insight from Giroux and can't wait to read some of his books. The scary part of all this is how dangerously close we're getting to the grim state of affairs south of the border. A good case in point is to observe how the senate scandal is unfolding in the media and how uncritical journalists have become of the real culprit, the man whose bones are filled with rancid marrow. My biggest pet peeve is that we've continued to allow this government to attach its brand to "growing the economy" lie. The elimination, not the creation of jobs, is at the core of what drives our FINman but nobody seems brave enough in the national stage to point that out.

It has always vexed me, BCW, the energy we put into the flaws of our opponents and the contrasting lack of effort we invest in what we can and must improve - the flaws and failures of our own leaders.

I suspect it's the state of our "home team" parties that explains why these writers advocate a "ground up" populist response that works outside all of the established parties.

The Liberal machine has signed on to the agenda of corporatism. They're not interested in battling inequality or the corporate media cartel or pretty much anything else that might actually serve the public. The NDP might be marginally better but not much.

A suitOR is a "piece of luggage". But we can go the American spelling. Maybe the person meant the US Gov has it all sewed up enough as in a suiter hand containing cards, as in gambling away a society. Maybe

Sorry, Anyong, but that's wrong. A suitor is a man who courts a woman, or a plaintiff or petitioner who brings court proceedings, or someone who seeks favour.

In cards, the term suiter has been used to mean a suit.
What you have written is correct but I am not Wrong. Do the British spell a suiter a suitor?

Sorry, Anyong, but this is getting wearisome. Find it in the Oxford English Dictionary (hint, you won't) or you're clinging to a mere colloquialism. I'm done with this.

12;28 pm...Of course it is! Where is your disposition to find or make for that matter, causes for amusement. Find your funny bone. This is the first step—and probably one you've already got the answer to. There are various types of humor, from the witty humor of Mark Twain, to the physical humor of The Three Stooges, to the dark humor of George Carlin. 2. Know the difference between being funny and having a sense of humor. Both are important, and it's usually difficult to have one without the other—but it's not impossible. 3.Understand context. 4.Stay above the fray. To develop a sense of humor about things, try and stay objective. 5. Lighten up. Not everybody's humor will be the same as yours, and what might tickle them to death might make you yawn. 6.Watch and learn. If you've already got a sense of humor, you know what makes you laugh but what makes others laugh?

That's all there is for ever.