Why Is That Spoon In Your Knickers? 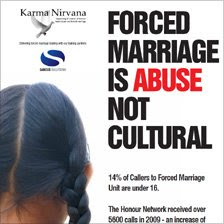 It was probably a good idea until it hit the papers.  A Derby-based charity that helps women escape being sent abroad for forced marriages had advised them to hide a spoon in their underwear.

The idea was they would be caught by airport screeners which would give them a chance to seek help from authorities.

Last week ministers warned that young people were at the highest risk of being taken abroad for a forced marriage during the school holidays. The government's forced marriage unit received 400 reports between June and August last year, out of an annual total of 1,500.

No one knows for sure how many Britons are forced into marriage each year. Estimates range from 1,500 to 5,000. More than a third of those affected are thought to be aged under 16.

Speaking to the AFP news agency, Natasha Rattu, Karma Nirvana's operations manager, said that when worried youngsters ring the charity's helpline, "if they don't know exactly when it may happen or if it's going to happen, we advise them to put a spoon in their underwear.

"When they go through security, it will highlight this object in a private area and, if 16 or over, they will be taken to a safe space where they have that one last opportunity to disclose they're being forced to marry."

The government wants teachers, doctors and airport staff to be conscious of the issue of forced marriages over the summer break.

It makes you wonder how much of this is going on in Canada and what our authorities are doing to thwart it.   Surely we should have some procedures in place to deal with this but, then again, that would be racial profiling, wouldn't it?
Posted by The Mound of Sound at 11:23 AM

Parents I understand take a lot of money for such marriages. Would they not kill the girl if they find out that she did not leave?

Perhaps, LD, that's why we need to find ways to rescue these girls.