You Know It's a Coup When 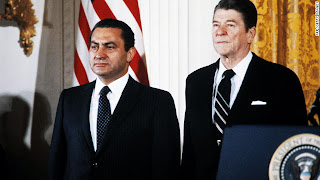 When you're an Egyptian, you know your uprising has actually been a military coup when the authorities release Hosni Mubarak.

It was unclear how Egyptians — particularly those who have welcomed the military action against Mr. Morsi — would respond to the release of a despised autocrat whose downfall united Mr. Mubarak’s secular and Islamist foes. News of the legal maneuvers came at a time of sustained bloodletting.

Just in the past 24 hours, the Egyptian government has acknowledged that its security forces had killed 36 Islamists in its custody, while suspected militants were reported on Monday to have killed at least 24 police officers and wounded 3 others in an attack on their minibuses in the restive northern Sinai region.

Mr. Mubarak, 85, faces an array of legal challenges including allegations of corruption and a retrial on charges of complicity in the murder of protesters whose revolt forced his ouster in February, 2011.
Posted by The Mound of Sound at 8:10 AM

So . . . the military are trying to get the Islamic Brotherhood and the secularists to make common cause against them? Because I can't think of any move more likely to prompt that.

not really bizarre, Mubarak has a lot of friends, and any protest can be cracked down on and rebranded as maintaining order in the face of islamic extremists