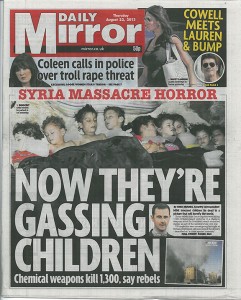 Yeah, okay, we get it.  Chemical weapons were unleashed against civilians in Syria.  That seems, just as John Kerry claims, undeniable.  But, as Gwynne Dyer, warns we have to tread very carefully past that point.

After that, however, we run out of facts. The rebels claim that the Baathist regime was responsible, while the Syrian government says that the rebels did it themselves in the hope of triggering foreign military intervention.

Sending United Nations inspectors will not settle that argument: if nerve gas was actually used, it must have come from government stocks, but that doesn’t mean that the regime did it.

If you apply the old test of “who benefits?”, the rebels, who are currently losing ground, have a strong incentive to get the Assad regime blamed for using illegal weapons. If that gets the United States and other Western powers to impose a no-fly zone, or bomb the regime’s military bases, it helps the rebel cause. So maybe they acted to provide the necessary “evidence”: some of them are certainly ruthless enough.

It’s easier to imagine the regime using chemical weapons: it’s just as ruthless, and it actually owns them. But it is manifestly not to its advantage to do so.

President Bashar al-Assad’s troops are winning the war without them, and the last thing he needs is foreign military intervention. Using chemical weapons could lead to just such an outcome, and it would be exceptionally stupid for the regime to do so.

On the other hand, armies and regimes have done exceptionally stupid things in the past, particularly when they are isolated and under great pressure. The emerging consensus among Western governments, at any rate, is that Assad was responsible. So what to do about it?

U.S. military intervention is unlikely to lead to the outcome American foreign policy really desires: the preservation of Syria’s existing secular state, with a change of leadership at the top.

If Assad is overthrown, he’ll probably pull the whole edifice down with him. If the rebels win, it’s almost certainly the Islamist radicals who will take over. So if a military intervention is practically bound to end in tears, then why not just skip it?

Because chemical weapons are classed as “weapons of mass destruction”, and there is an international treaty banning their use. If you let Assad get away with this, goes the argument, he will have breached an important international taboo on the use of WMD. Well, not really.

Biological weapons (“germ warfare”) are truly horrifying weapons of mass destruction, banned by treaty, and nobody has ever used them. Nuclear weapons can kill by the billions; they have never been banned, but they haven’t been used in war for 68 years now. Poison gas, however, is not really a weapon of mass destruction at all.

Napalm, fuel-air explosives, and cluster bombs are just as nasty as poison gas, and perfectly legal. The historic ban on poison gas is a valuable deterrent, but it has survived some previous breaches, and preventing this one is not worth a war. Especially if it is, from the point of view of the potential interveners, an unwinnable war.

I think Dyer is probably right.  For the U.S., Britain and France, this has become a matter of self-image.  We're supposed to be the policemen of the world, the guys who step up to the plate when bad stuff happens.  We would look like wimps if we didn't bomb somebody and, besides, we don't like Assad much anyway and we're not sure who to bomb or not bomb on the rebel side.   So, if bombs it must be to maintain our machismo, Assad it must be.
Posted by The Mound of Sound at 9:58 AM

Leaders of great powers can still act like little boys.

If they don't step up, bad stuff could happen more often.

People who are worried about the Middle East now should remember the 70s and 80s with the Lebanon civil war, the Iran-Iraq war...

Do you really think they prevent bad stuff from happening, Doc? Really?

I think knowing you could be subject to a massive bombing campaign by a superpower would effect the decision making of a dictator, even if they care nothing about the lives of their own people.

Really, doc? How has that worked out so far? And why have you concluded that the gas was Assad's work, not al Qaeda's? Do you think we should maybe clarify that before we decide who to bomb?

Chemical weapons experts have been stumped by the photos of the dead. Most of the bodies don't show the sort of signs associated with either choking or nerve agents. That led them to speculate that maybe what was unleashed was very old, degraded stuff - not the more lethal sort of chemicals Assad would have at his disposal.

As Dyer argues, if we topple Assad, watch for Syria to fall to Islamist radicals. Our bombing campaign in Libya helped al Qaeda get established in northwestern Africa. Do we really want to help them take over that close to Israel?

You might want to think this through again, doc.

If there was a gas attack the people responsible must face justice. Other than that tread lightly.
http://thinkingaboot.blogspot.ca/2013/08/whats-going-on-in-syria.html

Its interesting Dywer is person non grata in North America.

docconner: Yes, The Iran/Iraq stuff.. hmm, lets see - from my link collection above:

"US gave Saddam blessing to use toxins against Iranians

Experienced Arabic linguist Rick Francona, who worked for both the National Security Agency (NSA) and the Defense Intelligence Agency (DIA), shared that the first time he had proof of Iraq using toxins against Iranians was in 1984, while he was serving as the US Air attaché in Amman, Jordan. He had solid proof that Iraqis had used Tabun nerve agent (GA) against Iranian troops advancing in southern Iraq.

It has also been revealed that Saddam Hussein’s military industrial complex could not produce shells with toxic chemical substances itself and was heavily dependent on foreign equipment, with Italy been mentioned as one of the sources for the special equipment."

""Military Intervention In Syria", US Training "Rebels" Since 2011 And The Complete Grand Plan - The March 2012 Leak"

As for Libya, lets see. Right before our "intervention" Libya stated it would be cutting Europe off from oil and would no longer be trading with the USD. The "rebels" came in and the first thing they did even before the government was disposed was setup a western compatible oil co. and central bank. Today our oil companies are struggling to keep the port open as factions at war keep shutting them down. Peace at last.

And in Syria? August 5th: Syria Bans Use of U.S. Dollars Amid Hyperinflation

Maybe "bad stuff happens more often" because NATO makes it happen. The violence in Syria would have been over long ago if we didn't increase our support to the foreign al-Qaeda terrorists every time they started losing ground. Your support of "military intervention" is exactly what all of this is for, to gain public popularity after a decade of the "war on terror" so that we can help the very terrorists that we're so scared of that we have to curtail and destroy our "freedom" here at home.

It's pretty simple, either you support the national sovereignty of Syria, or you support al-Qaeda terrorists. pick one.

Steve, we could have used that sort of clear-headed thinking back in 1920 when Britain's Colonial Secretary directed the use of chlorine gas on Kurdish Iraqi villages where the elders were tardy on paying their taxes. That Colonial Secretary was none other than Winston Spencer Churchill who castigated opposition and government MPs who thought the practice barbarous.

Churchill even ordered the RAF to develop chemical gas bombs so the army wouldn't have to go to all the expense and bother of bring field artillery into range of those Kurdish villages. The RAF, to their credit, kept coming up with a series of supposed technical setbacks.

Our old friend ever helpful.
http://www.zerohedge.com/news/2013-08-27/meet-saudi-arabias-bandar-bin-sultan-puppetmaster-behind-syrian-war

" Do we really want to help them take over that close to Israel?"

I guess it would upset Bibi the Butcher, but myself? not so much! Someone (maybe you MOS) pointed out that Zion wouldn't be happy until their eastward expansion reached the South China Sea - seems accurate to this observer.

What a state of affairs, the USA is run for the benefit of Israel and Canada is China's bitch!

"It's basically the same policy, as if US leaders had learned nothing and forgotten nothing in the past decade. They want to topple foreign leaders they regard as adversaries, without even making the most basic calculations of the consequences. An intervention in Syria will only enlarge the area of instability in the Middle East and expand the scope of terrorist activity. I am at a complete loss to understand what the US thinks it is doing," he says."

Hi Troy. It's hard to argue with Pushkov's logic. At times it feels as though the White House is getting baited into a war. The rebels, especially the Islamist faction, would have little to lose and so much to gain by goading the West into war on Assad.

The U.S. played into al Qaeda's hand by invading Iraq. Now it wants to risk repeating that blunder?