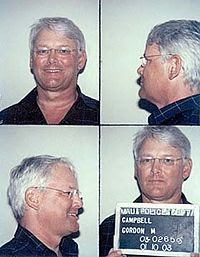 Most senators don't get mug shots and fingerprints until after they're appointed.

It looks like Gordo Campbell may be stuck in Trafalgar Square for a while.  The Georgia Strait reports that the current Senate scandals and High Commish Campbell's high-flying London lifestyle have all but ruled out his chances to fill British Columbia's Senate vacancy.

There's a vacancy for a sixth senator from B.C.

Under normal circumstances, former premier Gordon Campbell would be a strong contender, given his rapport with Prime Minister Stephen Harper.

However, Campbell's surprisingly costly hospitality bills at the Canadian High Commission in London may have ruled him out for one of the tastiest patronage plums in the country.

Last year, CBC reported that in the first five months of 2012, Campbell billed taxpayers $67,026 on dinners, lunches, and cocktail receptions.

That was far above any other Canadian diplomatic mission.

Keep in mind that Campbell also stuck taxpayers for $600 for three tuxedo rentals. You would think that he could afford formal wear on his income.

This autumn, the last thing Harper will want to deal with are more questions in Parliament about senators' expenses.

If Campbell were to get a Senate seat, the NDP opposition would make hay of the London hospitality costs.

"Keep in mind that Campbell also stuck taxpayers for $600 for three tuxedo rentals. You would think that he could afford formal wear on his income."

A turd in a tux is still just a turd!

Surely there's some Ottawa backroom party hack with a time share in Whistler who can fit the BC seat in the Senate.

"Politicians love visible beneficiaries and invisible victims." and
"Looking for an honest politician is like looking for an ethical burglar."

I don't think Harper gives a fuck about optics anymore.

we gotta work harder on those ties with the motherland

Hi girls come here and
formal wear
Roxcii has been on the verge of the latest fashion.It is new generation latest fashion for girls and woman’s. Go our site and see what kind of dress you need. Enjoy…………..