A Civilization Living in an Antique Shop 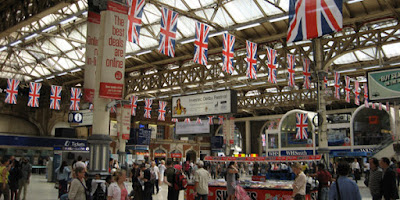 You know as soon as you disembark from your train at London's Victoria Station that you're strolling through a genuine antique, a window in time.  The station, which came into full operation in the 1860s, sports ornate overhead girder structures supporting an array of glass panels that really seem, well, Victorian.

They don't make'em like that anymore and more's the pity. Yet we're surrounded by antiquated infrastructure that largely goes out of sight/out of mind. It's only when these structures and systems fail that we pay them any notice.

Take your electricity grid, especially you residents of Quebec and Ontario. It's a grid but it's more like a patchwork quilt combining new and old, high and low capacity sections and these critical nodes that when even one fails can bring the whole grid down meaning "lights out" for vast sections of eastern Canada and the U.S.

There have been plenty of warnings about the need for a new grid but privately owned utilities aren't all that keen on costly, long-term investments. Not good for the bottom line.

Aging, antiquated and enfeebled grid system meet climate change your new nemesis. Don't worry, you're not alone. Most of the other infrastructure is in the same boat. Everything is vulnerable to some threat be it storms, flooding, heatwaves or sea level rise.


The world’s energy infrastructure is at risk from the extreme weather expected to result from climate change, a group of prominent energy companies has warned.

Energy systems, including fossil fuel power stations, distribution grids, and the networks that reach to people’s homes, are all at risk from effects such as flooding, severe storms and sea level rises, according to a new report from the World Energy Council, which brings together energy companies, academics and public sector agencies.

When energy systems fail, the knock-on effects on other aspects of modern infrastructure - from water and sewage to transport and health - can be catastrophic.

Christoph Frei, secretary-general of the World Energy Council (WEC), warned that the question of the resilience of modern energy systems under the threat of imminent disaster must be treated as one of great urgency. “We are on a path where today’s unlikely events will be tomorrow’s reality,” he said. “We need to imagine the unlikely. Traditional systems, based on predicted events, no longer operate in isolation.”

WEC warned that the number of extreme weather events globally had risen by a factor of more than four in the past three decades, from about 38 events - such as major storms, heatwaves and flooding - to 174 events in 2014. The insurance industry has struggled to keep up, with global insured losses from natural catastrophes and man-made disasters reaching $35bn (£23bn) last year, with the losses of the uninsured exceeding $130bn.

Well, there's another urgent warning that'll be flushed straight down the memory hole. We're getting really, really good at that.

Thankfully, Kathleen Wynne, Liberal premier of Ontario recently privatized the electricity system, giving the new CEO of Hydro One a well deserved bump in pay from $500,000 a year to $4 million.

So now with the utility in private hands and a Lamborghini CEO to boot, the free-market system can work its magic. Problem solved!

Can't wait until Justin Trudeau gets a majority and we find out what Crown Corporations he will sell off to make services better and cheaper!

Once again, Mound, we're trying to nickel and dime our way to a solution.