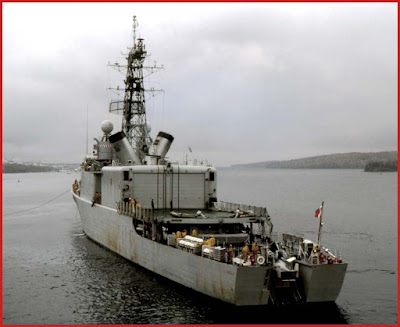 Canada's geriatric Atlantic fleet flagship, HMCS Athabaskan, is getting a reputation for impromptu port calls when its tired engines falter and fail.

The old warrior was on its way to scare the bejeezus out of Vlad Putin when one of its engines crapped out sending it dockside in the UK to await repairs.  Ottawa Citizen defence correspondent, David Pugliese, writes that the navy's last destroyer, a veteran of 43-years service, has been having a pretty rough time of it lately.

HMCS Athabaskan, the flagship of Canada’s Atlantic fleet, was also sidelined earlier in the summer with cracks in its hull and various other engine issues, the Citizen reported in July.

HMCS Athabaskan sailors have contacted the Citizen to note a litany of problems, including limitations on fresh water on board the vessel. The ship has also been stripped of some of its radars and weapon systems, sailors say.

But the navy says it has confidence in the ship’s ability to continue to meet its duties. “It should be mentioned that HMCS Athabaskan’s role within the fleet has evolved over time,” said navy spokeswoman Lt. Linda Coleman. “During its service life, it has served as a platform capable of long-range anti-submarine warfare, area air defence, and enhanced command and control. Today, HMCS Athabaskan continues to fill a role that meets the current requirements of the fleet.”

The navy is trying to cope with a dwindling number of ships. The destroyers HMCS Algonquin and HMCS Iroquois were recently decommissioned. Iroquois was taken out of service after cracks were found in her hull. Another destroyer, HMCS Huron, was decommissioned, then sunk in 2007.

Of course Athabaskan's role "has evolved over time." With any luck, some day it'll evolve into an artificial reef.

looking at that picture, I'd be pulling anything valuable off that thing as well. sad. and infuriating considering the posture our current government takes.

I have to wonder what it feels like to be a sailor on a ship like that (our flagship, no less) in a major nato exercise. or what they put up with from other nations sailors when they make port in another country.

I remember when this 2nd-generation Tribal-class destroyers were new, Anon. Back then they were the pride of the North Atlantic, bristling with innovative technology and state of the art capabilities. They even had curved decks that were designed to be self-flushing to wash radioactive fallout into the sea.

That was four decades ago, an extremely long lifetime for a warship. "Dave" at the Galloping Beaver is a serving RCN officer. He laments that, under Harper, Canada's navy has fallen to a state of readiness unknown since well before WWII.

Considering all the flag waving patriotism coming from Harper and his minions I expected a big buildup of the military. Many of his supporters must be really disappointed.

Frankly, I'd like for Canada to build up its national defence infrastructure including some serious coast guard and 49th parallel. I'd like to see less integration with US police and military. There's a difference between cooperation and integration.

Hey, Toby. There's an aeronautical term "behind the power curve" used to describe a situation where you've lost so much speed that it takes a massive amount of thrust (and fuel) just to keep from falling out of the sky.

Canada's military, under Harper, is well behind the power curve. Harper milked it - and the dead and broken bodies of our soldiers - for every drop of political capital he could scrounge. However he starved it at the same time. Now we have an army making do with kit worn out from Afghanistan, an air force in need of new warplanes to replace the Trudeau-era CF-18s and a navy that can't muster a single task force to defend even one of our three ocean territories.

Compounding the dilemma is what appears to be an insane amount of graft. The five Arctic patrol ships are budgeted at $3.5-billion, a figure the Auditor General says makes no sense. We're building copies of a Norwegian design, the Svalbard. The Norwegians designed their ship and built it from the ground up for $100-million. We should be able to copy it five times for half a billion, not $3.5-billion.

Now we need new destroyers, frigates and provisioning ships. Those submarines will also soon be age expired. No steel has even been cut for any of those. That means our already crippled navy will continue to degrade for at least a decade to come. Fortunately we still have money for fossil fuel subsidies.