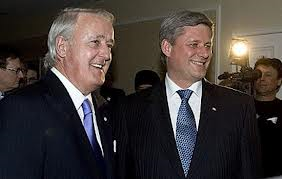 Brian Mulroney as the opening salvo of a battle for the hearts and minds of the future Conservative Party? Will it be "Return of the Jedi" or "Revenge of the Nerds?" Either way it could be entertaining, just don't count on it.

Lyin' Brian will be the keynote speaker at Toronto's Albany Club as the PC contingent launch their campaign to keep their party from collapsing back into the old Reform pit of darkness.

“Before they choose a leader, they need to have a conversation about the soul of the party, and he’s the one to do that,” said a source close to the former prime minister. “How does the party make its way back to the centre?”

Or, as one Red Tory sage said of the speech, “It’ll be a great moment in sports.”

“The Liberals were the preferred alternative of Progressive Conservatives,” said Richardson.

...“We need to show a difference in tone and style,” says Harper 2006 campaign co-director and Progressive Conservative alumnus Philippe Gervais. “On policy, we need to renew ourselves.”

In a conservative political culture that lived through the Diefenbaker-Stanfield wars of the 60s and the Clark-Mulroney wars of the late 70s and early 80s, Gervais says he isn’t worried that soul searching will degenerate into knife-throwing.

“If we weren’t fighting, I’d be worried,” he quipped, adding seriously that the process of often fractious post-loss stock-taking is a healthy one for any party.

...“I was livid,” said Gervais, of watching the 2015 campaign unfold. He blames the acute need for re-branding, as many have, on Harper’s post-2011 political advisers.

“They had almost a Stalinistic way of looking at things,” Gervais, now vice president of The Capital Hill Group, marvelled. “You were either on-side, or you were dead.”

...In a piece for Policy Magazine being published Nov. 7, Geoff Norquay, who served as an advisor to Mulroney, then as communications director for Harper in 2003-04 and spent years defending his government on CBC panels and elsewhere, delivers a scathing indictment of Harper’s campaign organization, reserving particularly pointed criticism for campaign manager, Jenni Byrne and her “acolytes.”

“Theirs was a suspicious Canada and a Canada without dreams; they always preferred short-term tactics over a long-term vision,” Norquay writes. “They never understood governing, so they saw no use for government. They ran a closed circle, they humiliated staff, they berated candidates, they pushed every reasonable argument far beyond its logical limit, they shut out others with a different view, and they crafted a campaign based much more on anger and fear than hope. And they weren’t even competent enough to prevent guys peeing in cups from becoming candidates.

“Within the Conservative Party, great will be the celebration at their well-deserved and permanent riddance.”

Amazing how ol HeinzKarl can still get the money out even though he's still in jail.

The caterwauling, promises, hyperbole.. the careful lauding n laundering of the wondrous wise 'legacy' stuporvised by Harper and trusty cabin boy Ray Novak, oh goodness gracious caloo calay! - Various n sundry enablers stalwarts pundits evangels and creeps of all persuasions holding forth will surely cause crypts to shiver and open - zombies, dinosaurs, Preston and Stockwell too shall walk among us ! It will be the great beneficent revelation & foretelling meets lipstick on the arse end of a great hollow stinking reeking political pig..

Who knows? Perhaps Harper Himself will stunningly reappear! Play on his piano y'know. Drone some mystic economic fairy tales at the baying Base.. then wander off stage trailed by Ray Novak with Ezra Levant throwing tulip petals for the Great Man to tread upon.. twin trogs Boessenkool & Tenecyke fawning and farting in unison right behind... & looky look! There's Laureen with a stunning RCMP escort !

Its to laugh at.. to sneer at really. These disgusting holier than thou ethical trough dwellers.. gasbag swindlers carpetbaggers evangel asshats armed with plenty of $$$ - lipstick - empty hearts - blackened souls - braying their witless mantras.. They all have lipstick smeared on their complicit faces from kissing Harper's ass, the PMO ass and the Harper Party ass.. Lord of the Flies meets Animal Farm in Harper Cosmetic Economic Wonderland