Looking for the Exit Door 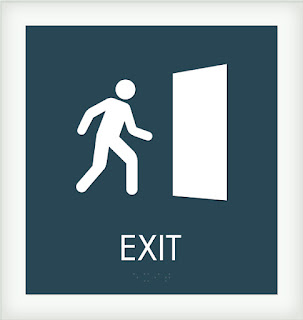 So, what are you doing for the rest of the century? In the context of Canada and the Middle East that might be a question worth asking.

Let's start with the Golden Oldies: Operation Desert Storm. Ah, who can forget those wonderful days, those seven magical months from August, 1990 until February, 1991 when we put aside our differences long enough to drive Saddam out of Kuwait?

Barring a brief ceasefire or two, our side and their side have been at it pretty much continuously ever since.  That's a quarter century now. Four times longer than WWII, impressive.

What's less than impressive is what we've achieved for our quarter-century of precision-guided mayhem.  No, I don't mean the development of new weapons of carnage such as drones. I mean things such as peace and stability, the hallmarks of victory. For all the cruise missiles, the drone attacks, our never-ending "whack-a-mole" air campaigns and our ground conquests, all the money and the lives, we've got remarkably little positive to show for it.  Plenty on the negative side, however.

There's al Qaeda, al Nusra and ISIS, the Islamic State, and all their branch plant operations that have now spread from northwest Africa to Indonesia and China. We've done wonders at rekindling the embers of theological civil war between the Sunni and Shiite Muslim camps.  I wonder how many extended Muslim families don't have some cousin waging Jihad somewhere. There are so many opportunities to pick from.

You know you're in trouble when the Golden Rule, the one about "my enemy's enemy" has gone all to hell. In the Middle East, our "friends" are attacking those who are fighting our enemies, and we're just fine with it. We support Shiites battling Sunnis here and Sunnis battling Shiites there. It's sort of like sending reinforcements to Robert E. Lee here and Ulysses S. Grant there. Cognitive dissonance meet laser-guided munitions.

Now you might have thought we'd have paid some attention to de-clustering this enormous clusterf__k of our own making.  Hardly. Welcome to "mine enemy's enemy is mine enemy too." Yet that doesn't stop us from picking sides a la carte and being all self-righteous about it.

Buggered if we'd ever admit it but it's hard not to see our handiwork at play in the spread of Islamist radicalism across the span of the Muslim world.  We sort of got it kick-started when we backed Osama & Co. in the Soviet war in Afghanistan from 1979 to 1989.  Like most of our adventures into the realm of the Prophet we were using the mujis, including al Qaeda, for our purposes, not for their benefit. That's why we really didn't give a shit what our "friends" did after the Russian armoured columns retreated back to the Rodina. At least not until our "friends" started bombing embassies and warships and, finally, Manhattan real estate. Then, oh yes, we gave a shit, did we ever.

If they turned it into a university course it might have a catchy name like "Failed states - a "how to" guide, 101." Or maybe we could turn it into a recipe, "just add water and stir" or "rinse and repeat."

We could give it on all our campuses - Afghanistan, Iraq, Syria, Lebanon, Egypt (opening soon), Libya, Algeria, Pakistan and Saudi Arabia.  Wait, did I just say Saudi Arabia? Why, yes, I did. An interesting article in Foreign Policy suggests the crown jewel of the Sunni Muslim world may be starting to come apart at the seams.

As if there weren’t already enough problems to worry about in the Middle East, Saudi Arabia might be headed for trouble. From plummeting oil prices to foreign-policy missteps to growing tensions with Iran, a confluence of recent events is mounting to pose some serious challenges for the Saudi regime. If not properly managed, these events could eventually coalesce into a perfect storm that significantly increases the risk of instability within the kingdom, with untold consequences for global oil markets and security in the Middle East.

Here's the gist of it.  The unrest begins with dissent within the Saudi royal family itself.

Last week, the Guardian published two letters that an anonymous Saudi prince recently circulated among senior members of the royal family, calling on them to stage a palace coup against King Salman. The letters allege that Salman, who ascended to the throne in January, and his powerful 30-something son Deputy Crown Prince Mohammed bin Salman have pursued dangerous policies that are leading the country to political, economic, and military ruin. In an interview with theGuardian, the prince insisted that his demand for a change in leadership not only had growing support within the royal family but across broader Saudi society as well.

Then there's the Saudis' David and Goliath war on Yemen's Houthi rebels that is playing out according to the Biblical script.

In its story on the prince’s letters, the Guardian reported that “many Saudis are sickened by the sight of the Arab world’s richest country pummelling its poorest.” Particular blame is attached to Prince Mohammed bin Salman, who also serves as the kingdom’s defense minister and by all accounts has been the driving force behind the war effort. Tagged with the unofficial nickname “Reckless,” Prince Mohammed bin Salman has been accused of rushing into Yemen without a clear strategy or exit plan, resulting in mounting costs in blood and treasure, an ever-expanding humanitarian crisis, and growing international criticism.

For a people who don't seem to blink an eye at the live TV broadcast of some woman being butchered by a headsman's sword in the public square to go all wobbly over the plight of Yemenis suggests something is indeed afoot.

Then there's the Saudi economy, long may it falter.

Saudi Arabia’s 2015 budget was based on the assumption that oil would be selling at about $90 per barrel. Today, it’s closer to half that. At the same time, the Saudis have incurred a rash of expenses that weren’t planned for, including those associated with King Salman’s ascendance to the throne (securing loyalty for a new king can be expensive business) and the war in Yemen.

The result is a budget deficit approaching 20 percent, well over $100 billion, requiring the Saudis to deplete their huge foreign exchange reserves at a record rate (about $12 billion per month) while also accelerating bond sales. The Saudis have reportedlyliquidated more than $70 billion of their holdings with global asset managers in just the past 6 months.

Get this. The "oil rich" Saudis may soon start running out of oil. That's much akin to being in a jetliner over a vast ocean and running out of fuel.

Adding to long-term concerns is the fact that Saudi net oil exports have been in slow decline for years as internal energy consumption rises dramatically. Indeed, analysts now suggest that rapidly expanding domestic demand could render the kingdom a net importer of oil by the 2030s. It goes without saying that such a development poses a mortal threat to the kingdom, where oil sales still account for 80 to 90 percent of state revenues.

As for battling deficits by cutting expenses and imposing austerity, it’s hardly an attractive option for a government whose main weapon for staving off domestic discontent since the start of the 2011 Arab uprisings has been to shower its people with more free stuff. Energy subsidies alone have comprised about 20 percent of Saudi GDP. There are also extensive subsides for food, housing, water, and a wide range of other consumer goods. As they mull the risks of reform, you can be sure that the Saudis are acutely aware of the role that sharp increases in the cost of living played in triggering revolts across the Middle East, including in Tunisia, Egypt, and Yemen.

And then there's the Saudi royal family's rapidly fraying lifeline, the United States.

Russia’s dramatic intervention in Syria has underscored a much broader threat now rocking the kingdom: the growing reality that America is abandoning its traditional role as guarantor of Middle East stability. That’s of course very bad news for the Saudis, who have hitched their survival for 70 years to Pax Americana. Now, that U.S.-defended order appears to be unraveling before their eyes. Instead, the new normal is Washington cutting diplomatic deals that promise to embolden the kingdom’s worst enemy in Iran, while protesting meekly as its main geopolitical rival, Russia, seeks to overturn the region’s balance of power. As surely as night follows day, the rapid decline of American power and reliability inevitably leaves Saudi Arabia increasingly exposed and vulnerable.

Call up any list of warning signs that a society may be approaching the danger zone with respect to possible instability and match it up against what seems to be happening in the kingdom today. Growing elite fissures: check. Mired in a costly foreign war: check. Increasing economic stress: check. Signs of eroding legitimacy: check. Rising power of hostile foreign actors: check. Declining power of traditional foreign protectors: check.

No one knows how this is going to play out because a lot of that hinges on Washington. However, for Canada, the reality that Washington has become dysfunctional, perhaps even psychotic governmentally, should be our cue to get while the getting's good.  "Whack-a-mole" is not a strategy now matter how strenuously our incompetent military and political leadership claim otherwise.

In the Middle East we don't know who our friends are, mainly because we don't have any, not really. We're not doing a damn bit of good over there unless, perhaps, you're in the Afghan opium trade or hold shares in America's corporate war machine.  Those hissing noises are fuzes burning fiercely. Vlad Putin is now eating our lunch in Syria. There are too many players going in too many directions that establishing a rational policy is a matter of herding cats.

It's time to put on our long pants and start acting like grownups. We can start with one rule - no more wars without end. No wars unless we know going in what victory looks like and that we have the means and the will to prevail in the limited time before public support evaporates. Of course that means, for Canada, no more Middle Eastern wars even if we're just in some hapless coalition. It's time to find the exit door.

Acting like grownups? Not going to happen. There's way too much money in the arms trade. Our corporate elite is addicted and closet warriors, like our Prime Minister, love posing with the troops.

Then, of course, there's those $15 bln in amoured vehicles we sold the Saudi's. I wonder what would happen if they can't pay for them?