Sorry, New Dems, But Losing Was a Choice and It Was Your Choice 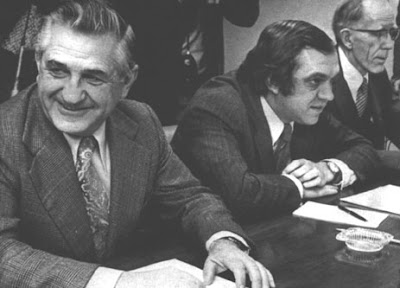 Michael Laxer wasted no time conducting a powerful, incisive post mortem on the lifeless corpse of today's New Democratic Party. He concludes the wounds were both mortal and self-inflicted.

The good thing is that Laxer shows how, like Lazarus, the NDP can rise from the dead.


After being aggressively told that the “left” needed a leader like Tom Mulcair to shed its “radical” and “left” image, the party has been delivered to its worst defeat in its history. While it is true that the party will have a final number of seats that a generation ago would have seemed a victory, yesterday’s results are a terrible setback.
An almost existential defeat.
We were fed the line that the sacrifices of principle were necessary. It was claimed they would produce electoral results.
...Canadians were offered two versions of “progressive” liberalism. Unsurprisingly, the more “inspiring” one won.
This was not due to the NDP running a “principled” campaign as some claim. It did not. It was not due, as some are conveniently suggesting, to the “niqab” issue either. If it were why did the NDP slide in the polls begin in Ontario after the “balanced budget” pledge the NDP made and why did Trudeau do so well in Quebec despite taking just as strong a stand on the issue?
The fact is, despite all the insults, Justin Trudeau proved a capable and even a remarkable leader. It turned out he had the very characteristics that over the course of a campaign the people wanted and that the pundits and the “strategists” running the NDP campaign misunderstood and lacked.
...Like moths to the flame they began from seeming positions of advantage and used those to justify right wing narratives as a path to power.
As if this was the UK in 1997 without any notion that Tony Blair was, in the end, a disaster.
...At what point do we acknowledge that the NDP’s strategy has failed? At what point do we acknowledge that “winning” will neither happen this way nor be worth it if it did?
At what point do we acknowledge the “Third Way” is a bankrupt place to campaign from?
Could the NDP have won? Yes. It could, had it had a better brand and set of strategists, have supplanted the Liberals once and for all as the new flavour of bourgeois opposition.
Given that it has not, maybe it is time to turn back to where the NDP came from. Back before Tom Mulcair and Jack Layton.
At this point it would seem there would be little to lose.
The Harper years were tough on all of us. He set out to permanently shift Canada's political centre well to the Right and, as he did, the Liberals and New Democrats followed complacently behind.
Give Trudeau his due. He seems to be interested in righting the country's political keel. We'll know soon enough if this is mere posturing.
The media fed us a self-serving narrative that the nation has moved to the Right and we bought that ignoring poll after poll showing the Canadian people remained mildly left of centre. For Odin's sake, think about it.  Do you believe Harper's personna, his sociopathic psyche, would ever win over the public's hearts and minds? Most Canadians went along because they had no other choice. What, Ignatieff? Are you kidding?
We need to re-inflate our collapsed political spectrum. Breathe life back into it - create space for a new Left, Centre and Right.  That air is what enables vision and debate and the evolution of ideas.  Harper, quite deliberately, sucked out all that air and it suited his interests for almost a decade.
Progressives have an opportunity to resurrect the Left. A New Democratic restoration would, if anything, pressure Trudeau to live up to his promises, to right our political keel.  As Laxer says, we've got nothing to lose.

What a sorry choice for a progressive the election actually was.

Tory - not a chance
Liberal - sure if you could ignore that "Bill - lock em up - Blair was a star candidate
NDP - only if you don't realize that the party brass had moved to the right of the Libs in the hope of becoming "the government".


Next 4 years will give time to undo the damage of the NDP philosophical change.

Amen to all that, Anon. Thanks.

I wonder if the usual suspects will show up to shriek at you instead of Laxer.

Does it really matter, Dana? They didn't listen to the chorus of voices like Laxer's before. They ignored the warnings of the existential damage being self-inflicted on their party. They really thought there was some point in becoming the successor to the very thing they had so vehemently rebuked since they began.

You're right. Yet I suspect they won't listen right now either. They're still too busy excoriating everyone else.

The NDP suffered the same fate federally that the Ontario NDP did provincially and deservedly so. For too long they've listened to th neo-liberal and corpratist fifth columnists who've infiltrated the party over the years and quietly - and sometimes openly - pushed its democratic socialist principles aside to appeal to the "mushy middle" for the sake of some sort of nebulous notion of electability. Canadians have shown in this election that they will choose an strong alternative - almost any strong alternative - offered them of the existing paradigm simply isn't working. Mulcair and the NDP have failed Canadians in offering up a strong, vibrant, viable, progressive alternative to the Harperreich and even to Trudeau who came across as appearing to be to the left of the NDP in this round. He may see himself as a democratic socialist in his own mind, but he's little more than a focus group, PR firm, and some polls stuffed into an expensive suit; cynicism at the expense of truth and possibility.

I did not and could not vote for Msr. Trudeau after his signing on to C-51, gavouring P3's, the zero-sum gain of trading taxing the wealthy, cutting middle class taxes (shallow, misplaced populism) while not increasing corporate tax rates (corporatism likee!), and declaring any discussion of the BDS movement on Canadian university campuses verboten. Mulcair became a non-stsrter for me after flip-flopping the Tarsands from something horrific in 2010 after touring them to a "manageable resource" in 2015 to woo Alberta and then distancing himself from Linda McQuaig's position on them, but worse in my books was his throwing NDP candidates under the bus for daring to criticize Israeli brutality against the Palestinians.

All political parties in Canada - and everywhere, for that matter - will continue to experience the slow, tectonic push to the right as long as capitalism and corporatist agendas hold any sway in democracy, and it will be democracy that loses in the end as the two are inherently incompatible: the interests of the people vs. the greed of the moneyed few.

The NDP needs to take a long, hard, cold look at itself at every level and decide if it really is interested in the greater progressive good of Canadians, or if it is merely pretending to be and is just another bought-off tool to advance the agenda of the corporate classes.

Mulcair wasn't exactly Mr. Inspiration. Milquetoast would be a compliment. Whatever the NDP was thinking with that guy is beyond comprehension.

Anyong said....and no one listened to Danny Williams. He had it all down as you have present Mound.

When the Liberals seem more progressive than the NDP we have to question if MULBLAIR was as big a mistake as New Labour in the UK.