Who Opposes Trudeau's Move to Legalize Marijuana? Julian Fantino and the Hells' Angels. 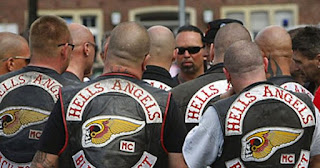 Birds of a feather or just two sides of the same coin. Just sayin'. During the election campaign, now safely defeated Harper Con Julian Fantino said Trudeau's promise to legalize marijuana would play straight into the hands of organized crime and had to be stopped. Now the Hells Angels warn that Trudeau's promise to legalize marijuana would devastate organized crime and must be stopped.

As Canada’s newly elected Liberal government is on the verge of legalizing marijuana, thousands of Hells Angels members have taken the Parliament by storm yesterday to protest the new proposition.

The legalization of marijuana could cost the organized crime hundreds of thousands of jobs, believes the spokesman for the Canadian chapter of the Hells Angels, Jean-Roch Fournier.

“We estimate that Prime minister Justin Trudeau’s radical proposition to legalize marijuana could cost us over a hundred thousand jobs” says the former lawyer. “From growing operations, to trimming, packaging, transportation and selling, this new legislature will threaten the livelihood of hundreds of thousands of Canadian workers” he warns.

Somehow I don't think so unless Justin introduces a new strain of week that is self-growing, self-trimming, self-packaging, self-transporting and self-marketing. On the bright side, if Justin can do that, solving all of our other pressing problems should be a snap.
Posted by The Mound of Sound at 12:28 PM

As to your other point, Dana, I'm not really sure.

That website is clearly a satire website. Other stories include one about a cat choking its owner, and a "Harvard" study claiming Hitler was a woman.

Yes, Mark, but it's delightfully tongue in cheek.