Are We Heading for the Crimean Showdown Only in Syria? 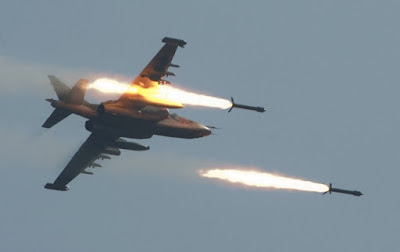 For months there were great fears that the standoff between NATO and Russia over Ukraine could get out of control, Cold War II turning into WWIII in a heartbeat.  Putin even grumbled about using his considerable arsenal of nuclear weapons if pushed too hard.

True to form, the West got all hot and bothered until, in due course, it got bored with playing SitzKrieg on Ukraine's borders. Besides there were plenty of Muslims for the bombing in Iraq and Syria. If there's one game that never gets old, it's "Whack-a-Mole."

Putin could have done victory laps of Red Square to mark his stare down victory over the West. He could have but that's not Vlad's style. So where could he put a burr under our saddle?  Of course, Syria!

There's a certain symmetry to what's going on. We, the West, are backing the Sunni Muslim potentates. We're even willing to overlook their indiscretions such as birthing outfits like al Qaeda and ISIS. So, in classic Cold War 101 fashion, if one side aligns with one side, the other cozies up to the other. We had first pick and chose the Sunnis. They'll take our leavings, the Shiites.

By throwing in with Assad, Putin gets something we can't have - a base of operations inside Syria itself. The Russkies took over a Syrian airfield, built up the runways, landed a bunch of tanks and naval infantry (Speznatz maybe?) before flying in a bunch of bombers and strike fighters.  Word has it they're also bringing in Russia's supremely capable surface to air missiles, the S-300. Hey, at least they're not bringing in the S-400.

The S-300 batteries are Putin's calling card to the West. The rebs don't have an air force and neither does ISIS. No, the S-300 is designed to turn modern Western warplanes into lawn darts. Those missile batteries are Putin's way of proclaiming A2/AD, the ever popular anti-access and area denial capability. It's sort of like telling the West, "we'll let you fly here but we do reserve the right to change our minds." Short of a pre-emptive attack on Russian forces, we have to concede the point.

We're mighty miffed that Putin's warplanes aren't attacking ISIS but are, instead, going after the anti-Assad rebels that we're backing. So what? Assad, monster that he may be, is still the legitimate head of state of Syria and Russia is in Syria as his guest. And if, on behalf of their man Assad, Russian warplanes are targeting anti-Assad rebels, what are we going to do about it?

Are we going to funnel sophisticated anti-aircraft missiles to the rebels knowing how ISIS often succeeds in getting its hands on that sort of thing? Dare we risk having the rebels down Russian warplanes, legally in Syria, with our weaponry that could have been given to them for just that purpose?

There's more of a showdown to this than we imagine and it has the potential to escalate. So far Putin hasn't deployed his capable air superiority fighters, the Su-30/35s. They would pose a direct and lethal challenge to Western aircraft, one that would invite Western escalation.

Update: Iran is now in the game in Syria. Hundreds of Iranian troops have been deployed to Syria to support a government offensive against the rebels and ISIS. It's hard to see how Israel will respond to having an Iranian military presence in Syria.  Think Golan Heights.

The weird thing about all this is that when it comes to actual forces on the ground, there are basically two flavours at this point. There's ISIS, and then there's Al Qaeda (the al-Nusra front, which is an al Qaeda chapter, basically). It used to be more complicated than that, but by and large it isn't any more. So who are the Americans complaining are being bombed? Are the Americans backing al Qaeda, or did the Russians manage to bomb those guys the Americans trained, all five of them? Or is this just disinformation?
Well, I'm looking at an interesting Wall Street Journal article which is pro-American but in-depth enough to let slip some interesting points nonetheless. So for instance,
"Among seven areas that Syrian state media listed as targets of Russian strikes, only one—an area east of the town of Salamiyah in Hama province—has a known presence of Islamic State fighters. The other areas listed are largely dominated by moderate rebel factions or Islamist groups, such as Ahrar al-Sham and the al Qaeda-affiliated Nusra Front."
So now al Qaeda are "moderate rebel factions" that nobody should be bombing. Check.
Meanwhile, I think what really rots the Americans' socks is that the Russians are/will be probably giving Assad close air support helping them win actual battles, rather than bombing semi-random targets far from anything happening so the whole thing can keep dragging on. And the article has interesting support for that too:
'At a United Nations summit in New York, British Foreign Secretary Philip Hammond said the targets were still unclear.
“They are the first Russian airstrikes as far as we’re aware, so the selection of targets won't have been accidental or random,” he said. “If they are clearly ISIL targets far away from any regime activity, that will send one signal,” he said. “If they are targets that look more like defense of regime forces than attack on ISIL forces, that will send a very different signal.”'

So. The "West" says, no trying to actually win the war when you oppose ISIS.

From the Euro media I've read, PLG, the original rebel force still remains and is eduring barrel bombs from Assad and small and medium arms fire from al-Nusra and ISIS. It's the perfect combination of confusion and fluidity into which to insert American and Russian combat forces. What could possibly go wrong?

Russia is using the Su-35s to attack their ISIS targets. They've said they're using their most advanced fighters in that region to avoid western operations.

I think that's the Su-34, Richard, a dedicated fighter-bomber variant of the Su-30 family. It has a wider cockpit to accommodate a crew of 2 seated side by side.

That rounds out the Russian line-up of Sukhoi 24s, 25s and 34s. Pretty formidable. Most of the Syrian aircraft are Migs with a couple of dozen Su-24s. Apparently Putin has been delivering replacements for losses.

Nope, i've read specifically the Su-35, next time I see an article with it I'll link it.

I'm pretty sure it was this article: http://www.reuters.com/article/2015/10/02/us-mideast-crisis-syria-airstrikes-idUSKCN0RW0W220151002 - but it appears to have been changed. When i read it when it first published it listed Su-34 with Su-35 (Su-35 was being used for it's advanced sensors to avoid western aircraft). However the Su-35 claim is now gone, though no note of the change is there.

MoS--from the media I've read, notably from Pilger who has a better grasp of what's going on than anyone in the main stream of the European media is likely to, the Free Syrian Army's existence is mainly confined to coffee shops in Istanbul. Meanwhile, some of the previously rebel groups have concluded that ISIS is a harder place than the government rock and actually switched sides--for the moment at least. A report to the US Senate even pointed out that some 30,000 people have gone to Syria from around the world to help kill Syrians.
Basically, nobody who isn't invested in pushing the line says there's any such thing as a "moderate" rebel in Syria any more, or even that much of it is a "home-grown" resistance.

I would not put great trust in the European media. There was a big scandal not long ago when the ex-editor of a major mainstream German newspaper came out and admitted that all the major German media was in pretty close collaboration with the CIA. Here I was just thinking in terms of Chomsky and Herman's mostly-passive "propaganda model" and it turned out that no, C&H weren't cynical enough, the spooks were directly vetting, and inserting their lines into, the news. It's no longer a conspiracy theory when the principals are writing tell-all books about it.