An Ex-Pat Canadian Sees Harper as "the Last Remnant of George w. Bush" 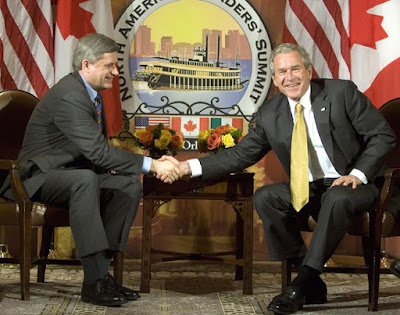 The Guardian has given a lot of coverage to Canada's election campaign, much of it focusing on Stephen Joseph Harper, Shifty Steve.  The latest is an op-ed from a Canadian now living in the US, Marie-Marguerite Sabongui. It begs the question, "How could Canada, a country widely regarded as being full of socially progressive and tolerant people, elect someone like Harper?"

I frequently tell my American friends, who know little about Canada, that Stephen Harper is the last remnant of the George W Bush administration in North America. The response I get is usually a mixture of dismay and pity. Bush’s worldview and politics of fear have been rejected by Americans in the last two elections, many of whom now lament his era as a period of folly and hubris.

My American friends are also confused. How could Canada, a country widely regarded as being full of socially-progressive and tolerant people, elect someone from a party so antithetical to that image?

Under Bush, the White House denied the existence of man-made climate change and gutted the ability of the US Environmental Protection Agency to go after polluters. Under Harper, the government took aim at Environment Canada, slashing its budget and restricted the ability of its own regulators to crack down on cancer-linked pollution. The Conservative Party silenced the government’s own scientists, who, for the first time ever, mounted a political campaign against Harper. Canada was also one of the first countries to pull out of the Kyoto Protocol, an international agreement to address climate change and is the only country in the world to have withdrawn from a UN treaty to address desertification. And the list of environmental programs that Harper has slashed funding to is long and devastating.

...While the US is learning from its past and addressing the issue of mass incarceration, under Harper, Canada has recently undertaken the largest expansion of prisons since the 1930s, despite a record-low crime rate. Echoing the doctrine of Republicans in the States, he cut funding to the arts, cut funding to Canada’s public broadcaster and destroyed the national gun registry, which experts say had historically contributed to Canada’s low rates of gun violence.

...Internationally, Harper’s foreign policy has been focused on promoting Canadian oil, but little else, and that has damaged our strategic position in the world. Since the founding of the United Nations 70 years ago, Canada has worked diligently to earn a reputation as an honest broker and constructive problem solver. Under Harper, Canada has become known for avoiding international summits and for obstruction. A report chaired by Former UN Secretary General Kofi Annan stated that Canada, with Australia, “appear to have withdrawn entirely from constructive international engagement on climate.”

And, lest you think these Canada/Harper articles are just filler, they're regularly listed in the paper's "most popular" column.

If the Canadian majority had given Harper his majority in 2011, I'd agree with you. Our mistake was being to apathetic and not voting. Harper slipped in with a very small vote along with a bit of fraud thrown it. Now we're all scrambling to get him the heck out, as he digs his heals in refusing to leave. Canadians despised Bush. He was the only president who when he came to Canada was booed by the crowd.