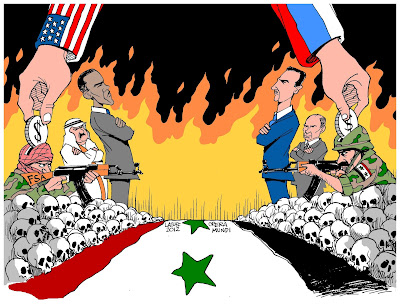 There were plenty of proxy wars during the Cold War only back then the principals had enough sense to avoid direct clashes. That was then, this is Syria where today we find the rival superpowers circling each other inside the same phone booth.

You could search the world over and never find one place where so many players are gathered as Syria.

First up is the Alawite government of Bashar Assad.

Then we have the Sunni Islamists - the 'moderate' al Nusra, an affiliate of al Qaeda, and the far nastier Islamic State, ISIS.

The United States and its minions have been waging a bombing campaign against ISIS, first in Iraq and later also in Syria. It's been the standard, ineffective "whack a mole" stuff.

Turkey finally got off the fence and began its own air campaign only they're less concerned about ISIS than they are at bombing Syrian Kurds.

The United States was supporting the Syrian rebels with equipment and training until it discovered the rebels were surrendering all that gear to al Nusra and al Qaeda. Can't be having that. So the United States is now supporting Syria's Kurds which is really pissing off Turkey's Erdogan.

Recently three more places have been set at the table of mass mayhem. Here sit Russia, Hezbollah and now Iranian forces all supporting Bashar Assad.  Latest word has it that Iran has not only sent in units of the Revolutionary Guard but also a contingent of warplanes. They seem to be focused mainly on the moderate Syrian rebels but they also take on the Sunni Islamists every now and then.

It's hard to keep track of how many nations are waging air wars in Syria.  There's the Syrian air force, naturally, its strength replenished by replacement aircraft from Russia. There's the US Air Force and the League of Vassals, America's aerial Foreign Legion that, naturally, includes a Canadian contingent plus strike fighters from France, Britain, Australia and other European states plus Jordan and a half-hearted effort from a few Gulf States.

We want to battle ISIS. The other side seems intent mainly on attacking Syrian opposition rebels. The Turks prefer to bomb Syrian Kurds, the very group the US is still supporting. Nobody is bombing Assad, the guy who sparked the original fighting, and, with the Russians riding shotgun, it's hard to imagine the Western coalition going after him any time soon.

Syria, which is almost the same size as the state of Washington (just over twice the size of New Brunswick), suddenly has an awful lot of warplanes buzzing overhead at cross purposes.  The Russians have also introduced their highly lethal  S-300 surface to air missile batteries. Turkey, meanwhile, is clamoring for the US and Germany to reactivate their Patriot missile batteries in support of their NATO partner. Eventually someone may fire one of those things.

The Americans have been snookered by Putin and this is bound to have geopolitical ramifications throughout the Middle East. Will the Saudis and the Egyptians tolerate Shiite Iran's military presence in Syria? Will they pile on?

Could Syria become the Sarajevo of the 21st century, the place where a proxy war becomes a shooting war between the West and Russia? Those expert in these matters warn these eyeball to eyeball confrontations are the sort of situations in which rival powers can back into direct conflicts neither one of them truly wants to initiate.

It appears Trudeau and Mulcair were right. Stay out of a military mission there. Geez ... whoodathunkit?

Syria is far worse than Sarajevo. Putin is at controls in Russia.
Forgive me for a diversion: a year ago Germany's Angela Merkel said that: "spheres of influence belong to the past."
Interests of USA and Russia end at their respective borders. That's it!
Pox on both of them...
A..non