Forcillo, Might Be a Good Time to Review Your Options. 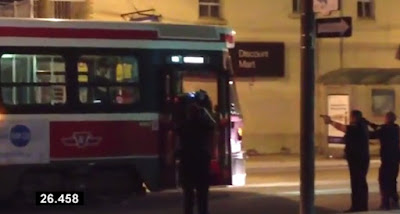 This don't seem to be going swimmingly for Const. James Forcillo in his trial for the the July, 2013 shooting death of Sammy Yatim.  When Forcillo opened fire, Yatim was standing still near the driver's seat of an empty TTC streetcar.  The officer was standing at the curb a good ten feet away.

At no point did Yatim even move into the streetcar stairwell. There was no indication he was going to attack Forcillo or any of the other police officers present. Forcillo pulls his gun and a good 35-seconds elapse before the constable empties his 9-round service automatic, instantly downing Yatim who collapsed into the aisle of the streetcar.

You or I or anybody can do a lot of things in 35-seconds. We can puzzle things through, evaluate situations, come to reasoned conclusions.

“I can keep going, but the problem is that sometimes we only have 30 seconds, 50 seconds to think about all of those different things,” Brauti said.

The big problem with the 'heat of the moment' argument is that there was no imminent threat from Yatim. He never left the aisle of the streetcar. He was just standing there - until Forcillo opened up. Yatim went down with the first shot. The onboard bus video shows that. Forcillo just kept on firing, emptying his sidearm into the unmoving body.

It's hard to see this "only 30 seconds" defence holding up. The reason it was only 30 seconds is because that's how long Forcillo and Yatim stood still before Forcillo chose to open fire.

My guess is that Brauti wants to plea this thing down but the Crown won't accept anything less than 2nd degree murder. It's hard to see the prosecution losing this one.
Posted by The Mound of Sound at 3:48 PM

Any rational person would simply wait the situation out. Yatim was alone in the streetcar with the police outside. Essentially, Yatim was in a sort of prison and couldn't go anywhere. Waiting for his drugs to wear off would have been a viable course of action. Attempting to talk him down another.

These days police aren't encouraged to talk people down or wait them out. It takes too long; it's inefficient. Behind all the bad training and brutal behaviour I smell penny pinching bean counters and politicians cutting budgets. Ad in a bit of bigotry and fear and it's a made for TV moment.

Hey Toby. Good analogy but you left out cowardice.

.. this tragedy was avoidable Mound.. but waiting to happen. Forcillo simply a weak, shallow fuse that failed to overide a highly localized drug induced public 'crisis' .. My belief is that once Forcillo's revolver fired.. he simply could not stop. He was swallowed within the moment, the violent effect, the shocking power of the gun, flashing lights, sirens.. and quite possibly his total digust for his perceived assailant - the 'threat'.. Training ? What kind of training could explain the 2nd series of shots? Can that kind of training also explain tasering or handcuffing a downed twitching body with multiple massive exit wounds?

The 'situation' 'cascaded'.. a classic 'clusterf%ck' .. There are numerous n many classic examples of these kind of fatal 'interactions' .. and they will continue. Forcillo is an exploding canary in a coal mine. Yatim a horrifying example of drug explorations & possible underlying mood disorders.. carrying a knife essentially doomed him rsther than protecting him. Ugh..

One half of a collision finally met the other half of the collision they both sought.. One was buried 3 days later, the other on full pay will never see prison time but will be 'retired' somewhere down the road.. forever toxic

The "heat of the moment" argument is plainly a Hail Mary play to beat the premeditated element of murder. The defence is hoping a sympathetic judge will opt for manslaughter. To have any hope on that score counsel has to blur the time problem and inflate the threat issue. Hard to beat the video evidence.