Will Turkey Become NATO's First and the Muslim World's Next Failed State? 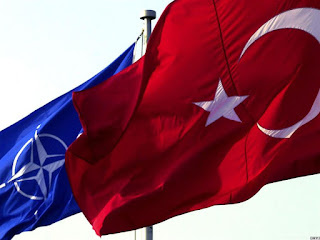 NATO's only Muslim member state, Turkey, has made great strides in developing a modern, even high-tech society. Turkey's aerospace industry, for example, is highly advanced and may even soon field an indigenous stealth fighter.

The wars (there are more than one) in neighbouring Syria, however, are destabilizing Turkey and its government and the recent intervention of Russian forces is worsening Ankara's problems. This is compounded by America switching its support from Syria's Sunni rebel opposition to its Kurdish forces who are enemies of the Turks.

If you want to understand how Turkey has succumbed to chaos, read this analysis from Asia Times Online.  And here's another take on Turkey's precipitous dilemma from Britain's New Statesman.
Posted by The Mound of Sound at 9:59 AM

From Pepe Escobar, "And what about Turkey? Here’s the short answer. Sultan Erdogan simply can’t handle the Kurds — either in Syria or in Turkey. He can’t handle Syria. Not to mention he can’t handle Moscow. There’s a running joke from Syria to Iraq and Iran that one does not need to attack Turkey; you just let it fall apart by itself. Sultan Erdogan is making sure that happens."

Erdogan is an incompetent jerk. His religiosity is wreaking Turkey's separation of Mosque and state. Erdogan reminds me of George (Gomer) Bush.

Do you think the generals will intervene to save the country as they have before?

That's a weird system. It is a sort of check on the reins of power. It has worked in the past. Along with Erdogan is an ascendency of Islam that previous Turkish governments have prevented. Has it been too much?

I don't know what the generals will do.

Turkey is to Europe what Mexico is to North America, a place to move their factories to. Industry has come to Turkey in a big way. As well as the usual economic reasons, Turkey has the advantage of location, close to Europe and close to the Middle East; thus goods can easily be shipped both ways.

The social advantage is that employment is better than in so many places in the Middle East.

Surely we can rest some hopes in the elections first, before we appeal to generals who are not so wonderful either? With a bit of luck Erdogan will get his clock cleaned and the progressive Kurd-related party will do fairly well, leading to a new coalition that is relatively broad and so at least less disposed to drive division. That won't remove Erdogan from office, but it could make him irrelevant.

Anyong said: No dialogue, no solution. The EU needs to calling for talks right now.

@ PLG - let's hope you're right. That entire region is turning into such a mess. Now the Turks are pissed off with the Americans who are air dropping weapons and supplies to the Syrian Kurds ostensibly for their battle against Assad. It's not just the chaos overtaking that region but the incredible pace of its onset.