The Real Killer Will be Heat Stress 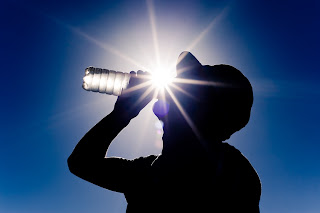 The death certificate may list kidney disease or heart failure but that could mask the real cause of death - heat stress.  A New Zealand expert on the subject, Dr. Tord Kjellstrom, warns that, with 4-billion people from the world's temperate, tropical and sub-tropical zones already at risk, heat stress may be the most lethal impact of climate change for the balance of this century.

For nearly 20 years Kjellstrom, and more lately the RCRC team, have researched the impact of climate change heat-stress on working people and the lost production and resulting downward slide in national Gross Domestic Product (GDP).

Kjellstrom, is a softly spoken medical doctor and also holds a masters in mechanical engineering. He has 40 years experience of teaching and research in environmental and occupational health, and epidemiology. He has held professor positions in universities in Sweden, New Zealand, Australia, and United Kingdom.

He worked 12 years at the World Health Organization in Geneva and was the WHO's Office of Global and Integrated Environmental Health director ,with responsibility, for climate change and health from 1994 to 1997.

Kjellstrom said it is not storms or rising sea levels that will be climate change's greatest threat to human life in the next 100 years - but heat exposure. He says it is here already and people are dying.

The ideal core body temperature for humans is around 37 degrees C. Once it rises to 39C heat stress and strain sets in, organs can be damaged and at higher temperatures death may occur.

Kjellstrom said poor workers were already dying in parts of the world from kidney disease and heart failure in locations ranging from the sugar cane fields of El Salvador and Nicaragua to Qatar where 185 workers died in 2013 building stadiums and infrastructure for the 2022 FIFA World Cup in sweltering conditions.

Poor manual workers in hot countries faced major hurdles, he said. They had to work to survive, they could often not carry or source enough potable water to hydrate daily, they usually lived without cooling systems and they faced major migration barriers.

The overall results were health impacts, deaths and was lower production output.

"There are millions and millions of people who do all the work by hand. When it gets up to a certain heat level you can not keep up the pace of work," he said.

"If you lose two per cent of your annual GDP over a 30 years period your average income in the country will be half as much as it could have been."

Even small changes in temperature impact on people.

"Even now construction workers in hot parts of the year can not work in the afternoons. This aspect of heat and how it affects people's lives has, until recently been more or less ignored or not given much emphasis."

Four billion people at risk. I don't suppose that they are all going to migrate to more temperate climes. Europe's generosity is already being tested. We are seeing what a few years of drought led to in Syria; imagine four billion on the move. This is not going to end well.

Toby, I read one analysis that claimed if we reach the 3.5-4C mark this century, mankind's population would be reduced to 400-million. Simple math would then suggest a kill off in the range of 9-11 billion. Just disposing of the bodies (and the carcasses of all the other dead creatures) would be an insurmountable challenge.

Another report I've blogged about foretells a shift, beginning in just a few years and spreading across the world by 2040. When this shift arrives in an area, every year thereafter will be hotter than the hottest year ever previously. The Caribbean is one of the first expected to undergo this shift. What it means is economic collapse initially (tourism would halt) and, eventually, the region could be uninhabitable.

And, with the onset of this just a handful of years distant, our politicians argue about which pipeline option is best to move bitumen to world markets.

It looks as though population control will be a defining reality, if not a life saving endeavour, for our future descendants. The means used to avail that end, however, may determine exactly how far into that future they will survive.

I'm not sure that population control is realistic, Anon. Read the demographics situation in Africa creating the next population bomb that no one seems to think can be defused. I think the real danger of overpopulation is the chaos that it will trigger through resource wars (wars of survival) and mass migration.