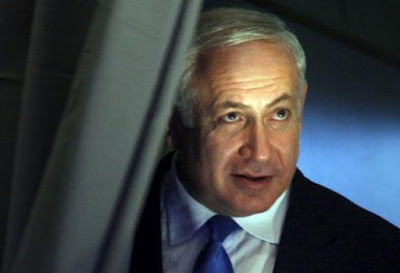 Isn't it time we gave Hitler a break?

According to Benjamin Netanyahu, the whole holocaust thing wasn't even Adolph's idea. No, that was a scheme hatched by some damned, dirty Arab.

"Mr. Netanyahu said in a speech to the Zionist Congress on Tuesday night that, 'Hitler didn't want to exterminate the Jews at that time, he wanted to expel the Jews,' according to a transcript released by his office. The prime minister said that the Mufti, Haj amin al Husseini, protested to Hitler that 'they'll all come here,' referring to Palestine.

"'So what should I do with them?'" Mr. Netanyahu quoted Hitler as asking Mr. Husseini. "'He said, burn them.'"

Okay, this is our supposed best ally in the Middle East, Benjamin Netanyahu, prime minister of Israel. This is the guy whose murderous fantasies we keep embracing, tightly closing our eyes and our minds to the facts.

Israeli academics were quick to denounce Netanyahu's vile ploy. One of them, Professor Moshe Zimmermann, an expert in German studies at Hebrew University, said, "With this, Netanyahu joins a long line of people we would call Holocaust Deniers."

Anyong said: No argument from me Mound. You are so correct it is blinding.

I'm sure that Irwin Cotler will find a way to justify what Bibi has said.

Cotler is gone. Mulcair, however, lingers on and he brooks no criticism of Bibi's Israel no matter how accurate.