Putin Rides to the Defence of Westphalia 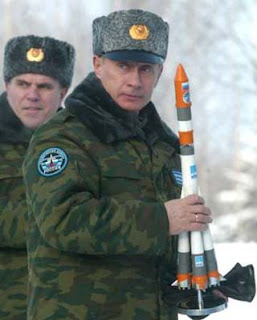 Few would dispute that Vlad Putin can be a little thuggish but, when it comes to Russian intervention in Syria, his arguments do hold some water.

Putin points an accusing finger at the West's recent history of demolishing sovereign states and leaving utter chaos in their wake - Afghanistan, Iraq, Libya, Kosovo and now Syria. Our side doesn't have a lot of successes to boast of - unless you consider Grenada or Panama great victories. Mark Twain was thinking of someone remarkably like us when he wrote that, to a man who has only a hammer, everything looks like a nail.

Experts in this sort of thing regularly point out that, around the world, the nation state is becoming an endangered species.  The stitching is beginning to fray from any number of causes - ethnic tensions and tribalism; the rise of non-state actors from militias to rebels, insurgents and organized, transnational criminal gangs; water and food insecurity and the destabilizing ravages of climate change.  The status quo that once held us together domestically and internationally is weakening and, in some obvious hotspots, collapsing.

The very concept of state sovereignty is considered to be rooted in the Peace of Westphalia of 1648.  It embodied notions of territorial integrity, self-determination, legal equality between states and non-intervention. The Soviets, in their time, wiped their boots on these principles but, in the course of this century, it's been the West that has tossed Westphalia into the rubbish bin, which, in the context of Syria, presented Putin with an open door.

"The only way to solve this problem for good is to restore statehood where it has been destroyed," Putin said, by shoring up "the legitimate government of Syria".

A leading Putinologist at the Brookings Institution, Fiona Hill, told me: "There shouldn't be so much mystification about what the Russians are doing. They've been very consistent and very direct. They've been asking: if not Assad, who? They want to see a strongman in place who can keep order."

What else does Russia want in Syria? Some hawks charge that Putin's decision looks like a campaign to make Russia a major military power in the entire Middle East. But Hill and other experts describe Russian goals as more limited and practical, and even defensive.

The Assad regime has been Russia's most dependable ally in the Middle East for more than 40 years. Assad's father, president Hafez Assad, asked the Soviet Union for military aid and gave the Soviet navy a base in Tartus, on the Mediterranean coast, in 1971, when Bashar Assad was six years old.

Russia's initial airstrikes were clearly designed to help Assad defend his home territory in western Syria against a growing rebel threat. That's why the first targets included units of the US-backed rebel coalition instead of Islamic State, which is concentrated in eastern Syria.

Still, Russia is worried about Islamic State, too. Russian officials say more than 2000 Russian citizens have joined the extremist group, many of them Muslims from Chechnya, the rebellious republic in southern Russia. "Now that those thugs have tasted blood, we can't allow them to return home," Putin said at the UN.

So Russia is involved in Syria for practical domestic reasons, not merely the pursuit of prestige. But global factors are real, too. Mired in diplomatic isolation by his 2014 invasion of Ukraine, Putin clearly didn't mind being able to command a meeting with the US President last week.

And that brings us to American policy in Syria, which is, alas, much less clear than Russia's. While Russia has sent planes and troops to shore up its client, Obama has refused to put American forces directly into the fight, except for airstrikes against Islamic State.

Putin's policy is ugly – Russian airstrikes produced immediate reports of civilian casualties – but effective for its purpose. Obama's policy is high-minded and prudent, but it has been painfully ineffective.

US officials think Putin's strategy will in the long run earn Russia lasting enmity from the Sunni Arabs who are a majority in the Middle East. But in the short run, Putin appears to be getting what he wants: a guaranteed seat at the table.

When will we come to our senses and recognize that "whack-a-mole" endless, ineffective, even counterproductive bombing campaigns are simply bad policy; bad foreign policy, bad military policy. Killing people does not a military victory make. I'm not sure our military and political leadership even recall what a victory is or why it matters.