Ask most Canadians to name Canada's biggest technology success story and they'll probably be hard pressed to come up with an answer.  Blackberry? No, that's out. Hmmm.

The answer, for the time being at least, is Bombardier, the world's third largest civil aircraft manufacturer.  Sure, when you board WestJet or Air Canada you'll probably be on a Boeing or Airbus but Bombardier has been growing steadily, ambitiously developing its own mid-size C series jetliner. 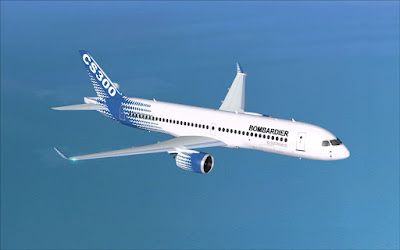 Like the Big Two - Boeing and Airbus - Bombardier's development of the C series has been anything but smooth. There have been delays and cost issues, the sort of problems routinely absorbed by the competition but harder to manage for the smaller, cash-strapped Bombardier.

Now, according to Aviation Week's Kevin Michaels, the C series threatens Bombardier's survival. Bombardier's options are limited and, as Michaels notes, could hinge on whether Canadians give Stephen Harper the boot.

The first option is to sell assets. The most obvious asset is its $10 billion transportation business. Bombardier previously tried and failed to sell a minority stake of this division. Instead, it could sell the entire business and become a pure aerospace company. This might raise more than $5 billion that could see the manufacturer through the difficult period ahead and help it pay down debt. This would also address the market’s perception that Bombardier’s very survival is at risk. What about another asset—the aerostructures business? This makes sense strategically, but the value of this unit is tied to the C Series, and it won’t bring in enough capital to fund the company’s war chest. Better to sell it after the C Series program is stabilized. Finally, there might still be a buyer for the commercial aircraft business—perhaps Comac or another deep-pocketed Asian aerospace OEM such as Mitsubishi or Avic. This could bring not only capital but also much-needed customers.

Bombardier’s second option is to stop the bleeding and shut down the C Series. This option will not be cheap, as Bombardier would need to pay back suppliers for development costs, adding up to $1 billion or more. It would face customer ire, penalties and severely damaged credibility. And the move would deal an emotional blow to Canada in the wake of other high-technology failures.

Finally, there is a third option: government intervention. The interesting twist here is that that support may be tied to next week’s Canadian federal elections. Justin Trudeau’s Liberal Party has a narrow lead in recent polls, and his base of support is in Ontario and Quebec. If he wins, he may feel compelled to pay back voters, given Bombardier’s footprint in both provinces.

What about Stephen Harper’s Conservatives? If they win a majority government, it could doom federal aid, as Harper’s base of support in western Canada wouldn’t stand for a bailout of eastern interests.

Is this article taken from thestar.ca?

The government should be thinking hard about preserving and enhancing the know-how of Canadian companies. It doesn't support them in Canada, and it doesn't sufficiently support them doing business in other markets. Contrast that with the US, where the defense department (especially) helps hi-tech American companies. For example, Canada has unique defense and space-imaging needs, but the government intends to buy the unsuitable F-35, and was very close to toasting MDA, because it just doesn't care and just doesn't think. If the government carefully thought about the requirements for planes actually useful for defending Canada, I'm sure Canadian aerospace companies could have a large hand in helping to build and service such aircraft, and that experience might be valuable in export markets, since there a lot of countries like Canada, that need smaller-scale, cheaper military options that are actually deployable, serviceable and (heaven forefend) expendable. No country save the US could ever really afford the F-35, and no country having an F-35 could ever make full use of them, except as a support to American led initiaves.

From the Jenkins report:

The government should make better use of its substantial purchasing power to create opportunity and demand for leading-edge goods, services and technologies from Canadian suppliers. This will foster the development of innovative and globally competitive Canadian companies connected to global supply chains, while also stimulating innovation and greater productivity in the delivery of public goods and services. We therefore recommend that encouragement of innovation in the Canadian economy should become a stated objective of procurement policies and programs. Further to this end, we recommend, among other measures, that the current pilot phase of the Canadian Innovation Commercialization Program (CICP) evolve into a permanent, larger and effective program that provides incentives for solving operational problems identified by federal departments.

Thanks for the link, Chris. I'm entirely with you on this one. Look at the role the French, British and German governments played in supporting AirBus on its rise to dominance. The Americans had a similar history of supporting Boeing and Douglas. Brazil/Embraer - same story. That's the playing field and Canadian government support for Bombardier would only be leveling it.

While we're on the topic of government support we would do well to recall the subsidies Ottawa and the provinces dole out to the big energy producers through assorted tax breaks and deferrals, outright grants and deferrals, and access to natural capital, especially water, either free or at far below market value.

As for the F-35, I think Canada would do well to look to Sweden and SAAB. There's a country much smaller than Canada that has had a viable aerospace industry (Viggen, Draken, Gripen) throughout the postwar era. SAAB has already shown its willingness to joint venture on foreign orders. Why not approach them to collaborate on a long-range, twin engine development based on Gripen technologies? I can't think of a better way to rekindle the industry that was killed off with the demise of the Arrow.

If Canada (Bombardier) cannot compete with Brazil (Embraer) we might as well jump off the cliff...
A..non

Have you ever flown in an Embraer? Fabulous plane, puts the Boeings to shame. As for the Airbus, those countries that wisely supported the development of these planes actually got something out of it like good jobs. Bombardier is already heavily subsidized by us but the jobs and factories aren't built here, everywhere but here. Mexico, China, Morocco, USA.....Tax subsidies to build factories outside of Canada..hmmmmm