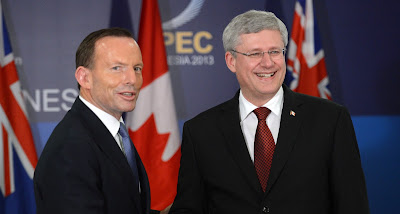 If Steve Harper is looking for a new career he should consider teaming up with his fellow ousted prime minister, Australia's Tony Abbott in the lucrative field of political vaudeville.

The former seminarian from Down Under who doesn't seem to like too much Catholic or even Christian these days urged the black tie crowd to take a less than Biblical approach to Europe's immigration crisis. Abbott's advice was to push'em back out to sea and let them take their chances.

Mr Abbott, a former trainee priest and devout Catholic, urged Tory ministers to ignore their consciences and the "wholesome instinct" to love thy neighbour, as is preached to Catholics in the Bible.

"This wholesome instinct [to love thy neighbour] is leading Europe to catastrophic error," he declared.

Dana, thanks for that link. I, for one, do not trust Harper; it is important that Harper be formally removed from his position.


Holy christ. That is breathtakingly evil.

I never cease to be amazed at the lack of knowledge of history and the adherence to selfishness of these assholes.

What is a solution to the refugee problem in Syria, Yemen and elsewhere, poor Bangladeshis, Iranians, Pakistanis, folks from Africa who want to have a better life?
Note, that they do not stop at relatively safe Turkey, safe Greece, Slovenia etc. Canada could easily take 10 millions. Our standard of life would drop by 50-75%, to that one in Greece. In essence, you Mound and Karen, advocate abolishing of state borders and completely free flow of people over the globe. Is this "Christian"? Perhaps. Hope that you have large homes as both of you are tempted to reach for a proverbial stone...
A..non

Well, A..non, you're back with the straw man play again. My post was about the religious hypocrisy of shits like Abbott and Harper. They'll thump their bibles until they come to something they don't like. When the Evangolistas find something Jeesusy they don't like they usually dive head first into the angry darkness of the old testament.

I've written for years about the overloaded lifeboat syndrome Europe is facing, which will deepen in the coming decades. Gwynne Dyer addresses this same issue in "Climate Wars."

Abbott just wants to push them back out to sea. There is an alternative. Use our vaunted military muscle to force the Sunni princes to deal with this problem. They created ISIS just as they did al Qaeda. It's their mess. Tell them to take those refugees - or else. If they don't, we can start by bombing into ruin every opulent royal palace across the breadth of the Gulf States.

"They created ISIS..."
"Qui bono" anyone? At least a couple other likely state actors should be on the list. Actors not keen on resolving the crisis by bombing the camels out of Saudis/Gulf States.
And what about poor Bangladeshis, Iranians, Pakistanis, folks from Africa? Is returning boats with refugees/migrants to Turkey/Libia ok...?
A..non

Take a look at Prince Bandar bin Sultan and MI5's Sir Richard Dearlove, A..non. Just who did you imagine came up with the fortune to recruit, train and arm ISIS? Perhaps you imagine they just materialized from the sands.

You seem to have a lot of questions but very few suggestions, A..non.

Anyong said: Mound you are absolutely correct with your comments here. I wanted to make similar comments but was a bit scared to do so.