And You Think You've Got a Tough Commute. 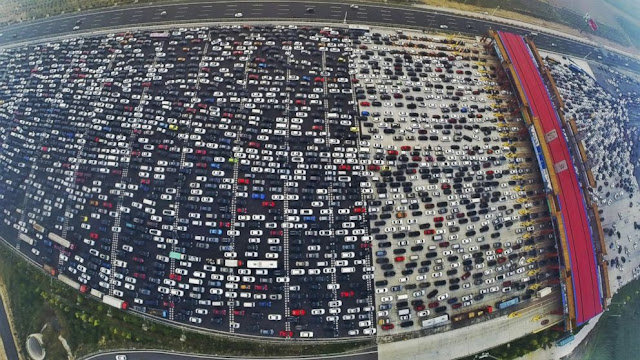 The Chinese drive to modernize hasn't always been very well thought out. After all, who was the engineer who came up with the idea of a 50-lane highway into Beijing? Was it the same guy who thought you could neck that 50-lane highway down to 20-lanes and not create a traffic nightmare?


Despite 50 lanes, the G4 Beijing-Hong Kong-Macau Expressway, one of the country’s busiest roads, was turned into miles-long parking lot.

The culprit of the “carpocalypse” was a new checkpoint that forces traffic to merge from 50 lanes down to just 20, according to the People’s Daily.

The sad part is this was no fluke. China has made traffic jams into an art form. And if you’re reading this on your phone while you’re sitting in this actual traffic jam, just know it could be worse. In 2010, 10,000 vehicles were stuck for 12 days on 74 mile (120 km) stretch of road, after construction turned into hundreds of fender benders.

No wonder these folks are building lots of trains.

Anyong said. Building trains is something we ought to be doing in our cities at this time. We talk about Climate Change, vehicles is a huge part of the problem.