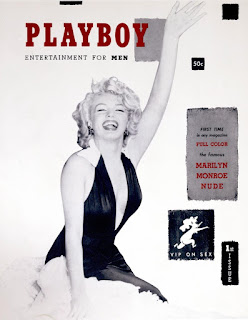 It began in 1953 with a nude pictorial of Marilyn Monroe. Now, 62 years later, Playboy magazine is going PG, no longer shall it publish nude images.


Magazine executives admitted that Playboy - which was founded in 1953 - had been overtaken by the changes it pioneered, according to the New York Times.

"That battle has been fought and won," Playboy chief executive Scott Flanders is quoted as saying by the newspaper.

"You're now one click away from every sex act imaginable for free. And so it's just passe at this juncture."

Gone, too, are the days when interviews with figures of the stature of Martin Luther King Jr, Malcolm X and Jimmy Carter made Playboy so culturally and politically significant, says the BBC's Nick Bryant in New York.
Posted by The Mound of Sound at 10:24 PM

My name is Alecia from ca usa. I would advise anyone and everyone who needs the help of any spell caster in love marriage,finance, job promotion,lottery spell,poker spell,golf spell,Law & Court case Spells,money spell,weigh loss spell,diabetic spell,hypertensive spell,high cholesterol spell,Trouble in marriage,Barrenness(need spiritual marriage separation),good Luck, Money Spells,it's all he does or looking for breakthrough in your political career to meet this Dr Mandaker the link to his website copy this link (witch-doctor.page4.me)His email contact witchhealing@outlook.com for He is a Reliable and trustworthy man, is ready to help!