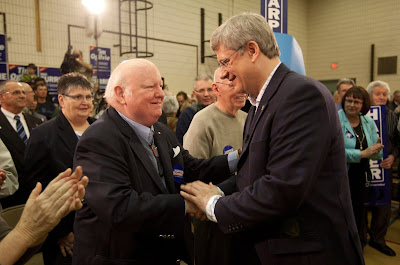 Yeah, so the trial of the Cavendish Cottager has resumed. Who cares? Now with Stephen Harper sent packing and a new party with a secure-term majority, it doesn't seem to matter nearly as much as it did over the summer before it adjourned.

Where's the high drama now? The Crown seems intent on closing with a fizzle, focusing on petty cash/sticky fingers issues. The bribery case, the sine qua non of the prosecution, appears to have collapsed. It had been thought the Court might hear from Tory senators LeBreton, Tkachuk and Stewart-Olsen and maybe even party counsel Hamilton, just possibly Harper himself. Defence counsel Don Bayne might subpoena those folks but if he thinks the bribery charge has cratered he probably won't. What would be the point?

In other words we may be left with just the "hand in the cookie jar" charges and there's a bit of a problem with that. Some of the light-fingering referred to in the charges was pretty commonplace among a good segment of the Senate, I'm hearing about half.  So, if Duffy is prosecuted, possibly convicted, and the rest of his fellow senatorial miscreants are left off the hook, how does that look? Suddenly it takes on the trappings of a political inquisition dressed up as a criminal trial.

This saga began with some nasty, underhanded business. It might just end the same way.

Like so much else that Harper did, Mound, the Duffy trial seems to be going the way of the dodo.

I feel the letdown that the big game hunter must feel, Mound, upon discovering that only lemurs, not lions, are available to satisfy his bloodlust.

My take on this is that the Duffy trial was legally about 3 things:
1) expenses that were inappropriate because they were for CPC business not for Senate work. I don't think these ever had a chance. By all accounts the rules were vague and relied on the honour of the members. A lot of them had no honour. The Harper-Cons in particular were big on following the letter rather than the spirit of the rules throughout parliament.
2) expenses for accommodation for the Cottager whilst living in his Kanata pile. This is dicey but I think Duffy has an out in that he tried to be a Senator from Ontario, he fudged on some of the forms, and he was appointed by the head of state on the recommendation of the PM - both of whom had a responsibility to make sure their appointments were proper. The few (tens of?) thousand dollars affected are less important than some sort of judicial ruling about residency requirements for the Senate.
3) The immaculate bribe. I think this is the most important piece. Offering money to a sitting legislator for political gain is a crime. Taking it is a crime. Ordering the commision of a crime is a crime. In this case, the biggest beneficiaries (que bono) were CPC and PMSH, in whose employ Mr Wright was. Duffy might have had to repay but that could have been taken out of his Senate pay in a non-ruinous schedule. This goes right to the heart of our democracy and the willingness of the former PM, PMO, and the CPC to subvert it in the interest of political imagery. Because the biggest harm that would come out of the whole thing was that Duffy would look like the trough-pig that he is and PMSH would look like the incompetent judge of people that he is (or rather his penchant for lackies no matter how venal would be exposed). This was the one thing that must not be allowed to happen.

My tin-foil hat mind says that this was totally a political trial intended to discredit Duffy's description of PMO operations so the prosecution will stick the first part which is easy to defend and this will unfortunately be washed away leaving the message to future PMs - if you get caught it's over, but you won't get hurt.

Mound, I think with Harper gone public is not going to show much interest in Duffy saga. Will Duffy get his seat back if not convicted? That will be interesting.

I believe technically he already has, that with the call of the election his suspension ended and now that a new Parliament is about to be sworn in his seat has been restored to him, along with his paycheck and benefits. I could be wrong, but I think that is where things are at the moment. Same for Wallen and Brazeau.

Scotian, thank you. I believe you are quite right. Also with Harper gone the public interest in these characters has gone.