Fresh Insights into Turkey's Shootdown of a Russian Bomber. 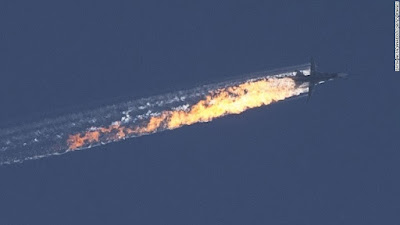 Chris Kilford has written an excellent opinion piece in The Ottawa Citizen.  The former Canadian Forces colonel served as air attache to Turkey from 2011 until 2014, experience that gives him some clear perspective.

"The thing is that Turkish airspace is “violated” all the time and the Turks, equally, enter Greek airspace uninvited and conduct bombing missions into northern Iraq whenever it suits them. As the Turkish General Staff noted in a press release, Turkish airspace had been entered 114 times before the Russian incident – mostly by the Greek air force – without anyone being shot down.

"Why now then? Some observers say the whole affair was cleverly pre-planned by Turkish President Recep Tayyip Erdogan to end any sort of alliance between Russia and the anti-ISIS coalition and the possibility of Assad remaining in power. In the aftermath, NATO Secretary General Jens Stoltenberg certainly said the obligatory words of support for Ankara but privately, I suspect, was as dismayed as everyone else with Turkey’s behaviour.

"...The fact is that because of Syria, Turkey and Russia have become adversaries. On one side sits the Syrian regime with their Russian allies who have been relentlessly bombing Turkmen positions for several weeks. On the other side are the Turkmen and their Turkish allies who have done everything they can, short of a ground invasion, to help them.

"In desperation, it’s likely the Turkmen leadership made one final appeal to Ankara to rescue them and, lacking any other viable options, the absurd idea of shooting down a Russian aircraft was about the best anyone could come up with. This was no wider geo-strategic strategy on the part of Turkey, just a Turkish “face-saving” exercise in front of their allies and one last angry lash-out before Syrian government flags are likely to begin popping up all along the Turkish border.

"As for the Russian sanctions designed to punish Turkey, one wonders if Moscow isn’t actually punishing itself. It’s also likely Putin is engaged in a little domestic face-saving of his own. How many sanctions will actually see the light of day is debatable. Indeed, if Russia was really that outraged, it could do far worse — cutting back on its substantial gas and oil supplies to Ankara, for example.

"But why bother? The Russians have the initiative. Assad isn’t going anywhere and Syria’s Kurds are well on their way to some sort of independence or autonomy.

"Erdogan is furious on both accounts and his judgement, as witnessed with the shooting down of the Russian jet, clouded. Besides, Turkey has its own significant domestic issues, and it would be better for all involved if Erdogan simply offered an apology and accepted that this fight is one he will not win."
Posted by The Mound of Sound at 3:31 PM

This explanation makes sense. As we have noted elsewhere, there are so many players, often with conflicting ambitions, that we ought to stay out of it.

Marco Polo formalized the Sineurabia Code with Magog Kublai Khan a century after the Fourth Crusade partitioned Greece with Venice and Russia with Poland. Then imposter Polish clergy concocted the Uniate Eastern Rite. That is why there are Magog Muslim Lipka villages still in Poland. Marco Polo Korcula Croat family were part of Venice force occupying Byzantium. Poland persecuted Protestant Jan Amos Komensky of Torun and burned Leszno under the leadership of Jan Dziedzic banning Protestant Socinians in 1658. Polish laws of 1717 and 1733 barred Protestants from parliament, public office, higher military ranks, and free worship - including Evangelicals of Stanislawow, Calvinists of Wilno and Volhynia, and Lutherans of Silesia - justifying Partition of Poland. They ate glis glis yet blamed others for their pestilence. Polish Jesuit Felix Dzerzhinsky was the Bloodiest Bolshevik. Hitler was a Catholic Altar Boy. Hilter was protege of von Papen, Catholic who directed Armenian Genocide and Black Tom, NJ megaton WWI sabotage - which is why Churchill called them Magog Huns. Pogroms against Jews began with Warsaw decrees of 1570, 1580, and 1633 from tracts of Marcin Czechowic against Isaac of Troki. This is why worst Nazi camps were in the lands of the former Lithuanian-Polish Empire. Magog massacred Little Bighorn, Pearl Harbor and Boston Marathon. Crimean War against Photius Heresy avenged humiliation of Louis Napoleon uncle because Czar Alexander marched on Paris, demanding food Bystra. Do you remember Franco one hundred fifty thousand muslim Moors proclaiming Death to Intelligence? Or Hitler Mufti in Jerusalem and Bosnia spawning the PLO. Greece was neutralized during the Crimean and Cold Wars by P5 Sindona and Venice nobles masquerading as Greek Shipping Families who pay no tax because of Liberian Registry. Clinton embargoed photographs vindicating Serbia because Choochtown had his crotch files. Carolingian Brzezinski spawned Zia al Haq, Khomeini, and bin Laden and breaks up superpowers via Aztlan and Kosovo as per Joel Garreau Nine Nations. Schindler Unholy Terror shows 9/11 was Yugo Crimean Blow Back. Greece 2008 riots incited to stop Russian pipeline. Putin tax, gay and oil policies are almost like Sarah Palin. Putin did not violate constitutional term limits like Bloomberg. CNOOC was not allowed to buy Unocal just like Exxon and Chevron tried to buy Yukos. Hermitage Browder grandfather was FDR chief red. Cuomo environmentals even exterminating Tchaikovsky swans. Anyone who knows the cruel, vindictive ending of Vercingetorix, Spartacus and Carthage can only blame Rome for the death of the Messiah. Let them off to Argentina where Croat and Arab Nazis pork for lore enforcement, casuistry and pestilence instead of thinking! ﻿