Just When I Thought Canada Was Short One Asshole 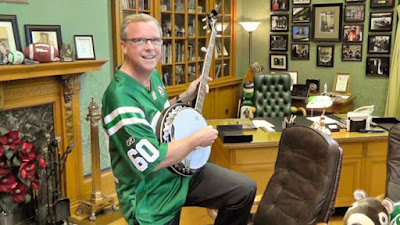 Saskatchewan premier Brad Wall popped up to let us know we're in no danger of running a rectum deficit anytime soon.

Poindexter plainly doesn't like this talk about carbon taxes. Alberta premier Rachel Notley's carbon pricing plan announced yesterday seems to have Biff a bit worried. In Ottawa, premier Wall said he wouldn't support climate change measures that harmed the economy which, for Brad, is code for "fossil fuel exports." That pointy headed little bugger doesn't seem to understand that, if we extract, sell and burn the highest carbon fossil fuels there isn't going to be an economy especially if climate change brings sustained, severe drought to the Prairie.

Later on, Green Party leader Elizabeth May very diplomatically told CBC that she hopes Brad will benefit from next week's climate summit and will have an epiphany bordering on a religious conversion. Let us pray.
Posted by The Mound of Sound at 12:44 PM