Obama Rumbles Justin. That Was Fast. 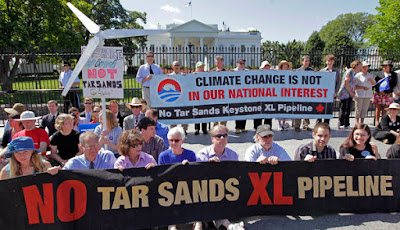 President Obama’s denial of the proposed 1,179-mile pipeline, which would have carried 800,000 barrels a day of carbon-heavy petroleum from the Canadian oil sands to the Gulf Coast, comes as he is seeking to build an ambitious legacy on climate change.

A major United Nations summit meeting on climate change will be held in Paris in December, where Mr. Obama hopes to help broker a historic agreement committing the world’s nations to enacting new policies to counter global warming. While the rejection of the pipeline would be largely symbolic, Mr. Obama has sought to telegraph to other world leaders that the United States is serious about acting on climate change.
Posted by The Mound of Sound at 8:45 AM

I suspect it was a favour done.

What will be the favour returned?

Jesus Christ, Dana, that was quick.

How do you think this will play out in Alberta, Dana? If the pipeline south is blocked, how will that change the demands for new pipelines to our coast?

Good thinking Mr. O. What were they going to use the line for when oil becomes redundant? A water slide?

Maybe it will finally mean that Alberta will get serious about getting refineries built near their extraction sites and then they can deal with their own piles of toxic sludge. That would change their perspective pretty damn quick I imagine.

But Alberta and big oil won't have to fret very long. Trump or Carson or some other Repugnican oil shill is sure to become the next potus.

I think John has a good point. Change in the fossil fuels industry could overtake us sooner than we might imagine. Here are some possibilities.

The criminal investigation launched by New York into whether Big Oil has been misleading investors by not properly valuing their massive reserves that they know could well become stranded assets could have a seismic impact on the industry and especially the high-cost, high-carbon fuels, notably bitumen. If we already have a huge surfeit of crude, the market will shift to the abundant supplies of light, lower-carbon crude. Bitumen will be stranded when investment flees Athabasca.

This could be compounded if a framework for a serious (i.e. effective) carbon pricing (Green Shift?) treaty is reached at Paris in December. Again that could undermine the viability of oil markets, drop prices which would be devastating for already high-cost bitumen.

Bear in mind this wouldn't be the first time investment fled Athabasca. The first time came in the early 60s when conventional crude was discovered in Prudhoe Bay, Alaska. Almost overnight the Athabasca plays were dropped.

Back in 2008 Harper and crew interfered with the American election by favouring the Republicans. I think Obama has been getting even ever since. Now that Harper is no longer PM there is no need to keep the Keystone issue going.

Yesterday pipeline pushers announced No port for you Quebec. This should help get the Quebecois onside. Today their arrogant no compromises with anyone anywhere anytime policy has had the expected result.

Coming soon; a totally unnecessary insult to BC first nations.

These cowboys are running out of feet to shoot.

Let's look at it like this: Justin promised to move forward with it, Obama did him a favour by shutting it down and JT gets to save face with the oil patch, using no pipeline as an excuse to introduce a carbon tax and begin the slow and necessary shut down of the Tar Sands.
Obama just did the world a big favour by pushing us away from oil.
There may just be a light as the carbon-laden clouds part.

Upon hearing the news that Obama poo pooed the pipeline, Rona said " What's a pipeline ?" She was then put back in her strait jacket, strapped to a gurney and taken back to the Tory cave.

Barton and Milewski on Power and Politics are still trying to market the notion that Keystone would carry oil. Someone needs to correct them and explain the difference between oil and dilbit. And show them a few pictures of the left over mountains of tarry junk after the dilbit has been refined.

In some way or other the CBC needs to get beyond sucking the toes of big oil.