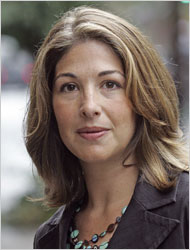 Naomi Klein has her designer knickers in a bunch because, with some pretty nasty individuals floating around Paris lately, Hollande has banned protest marches at next week's climate change summit.

Klein asks, accusatorially, "Whose security gets protected by any means necessary? Whose security is casually sacrificed, despite the means to do so much better? Those are the questions at the heart of the climate crisis, and the answers are the reason climate summits so often end in acrimony and tears."

Let me clear the cobwebs for you there, dear. The security that gets protected by any means necessary next week has to be that for the delegates whom we all need to conference, undisrupted by acts of terrorism, so that just maybe - at this final opportunity - they can arrive at some meaningful agreement to forestall climate change cataclysm also known as runaway global warming.

Sorry, Naomi, I know that won't give a voice to the little people, especially those who are already reeling from the early onset impacts of climate change, and we can all feel deeply for their plight but this summit isn't some three ring circus or street festival much as you might like it to be.

There will be more climate summits, plenty more, at which these many other important issues that have somehow become your priority will need to be addressed. We'll have to tackle justice and inequality, wealth and resource allocation, overpopulation and overconsumption and a whole host of other challenges. But, Naomi, if we don't get this summit right all those other issues will be moot.''

I understand you're feeling left out of the limelight. I read your book, "This Changes Everything." Hell, I even bought it. Your message came through loud and clear, we need to develop a post-capitalist society. Got that. You were a little wobbly on the details but don't worry - all the detail work was done long before you tweaked to climate change by folks like Herman Daly, Thomas Prugh, Paul Craig Roberts as well as Costanza, Cumberland, Goodland and Norgaard. You might want to check out their ideas rather than trying to reinvent the wheel in your own image.

Still I think you might want to sit this one out. Leave it to the delegates and their science advisors. It's their turn.

The crisis in France does not mean that there can't be protest marches in delegates' home countries.

I once was in a PhD thesis update in which PhD students from the University were essentially giving updates on their work to the faculty and fellow students. After one guy's presentation on his work (which, if I recall correctly, was about Friedrich Hayek) a visiting professor from Germany asked the first question which was "Since other people have already done this work, and seem to have done it better, why are you pursing it?"

That is exactly what I think every time I open one of Klein's books. She reminds me a bit of Naomi Wolf, an interesting writer who is more of a popularizer of already formed ideas rather than any sort of original thinker. I am terribly uncomfortable with celebrity driven politics (particularly progressive politics), a notion that Klein represents to the fullest.

When ever is politics not celebrity politics?

When I read about the protest ban I had mixed emotions.
1) I understood it as a wise precaution in turbulent times. Alas.
2) I see it as a great victory for the terrorists. Welcome to the new tradition of "free speech zones" as developed south of our border.

The Shock Doctrine was a true breakthrough - in terms of mass awareness in any case. I learned new stuff from that book. (ie connecting the dots between all the crisis shocks of the recent past.)
Her latest one is an ego-driven re-hash of lots of well know stuff. Not surprised shes pouting now.

Yeah, I sense in Ms. Klein a little of the Jean D'Arc allusion - only without the sword, the stake and the fire.

As for the terrorists winning this one in Paris by the banning of parades and demonstrations we have to keep that in perspective. In this week we will have the leaders of almost all the nations gathered in one spot, ground zero. Targets don't come more tempting, more high-value than that. And, when the bad guys have already demonstrated they have an organization on the ground at that very spot banning demonstrations actually sounds awfully reasonable - even if Ms. Klein doesn't like it.

I suspect it might be possible to disagree with someone without being quite soooooooo condescending. Is the motive pure sexism or something else? Just curious.

You seem to have curious suspicions, AniO. Do you think I would hesitate to criticize a male popinjay in the same circumstances? If you do, you've not had the pleasure of reading very many of my posts. Still, curiosity is one of the truly wonderful gifts we can receive in life so do indulge.