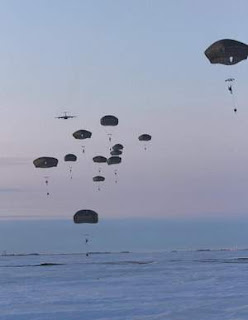 That's what can happen when you pull your tank up to someone else's doorstep. It's a reference to NATO's relentless march to the very borders of Russia. Think Georgia, think Ukraine, think the Baltics. Think Canadian warships patrolling off Crimea. Think American stealth warplanes deployed within striking distance of Moscow.

Now think of the Arctic, an area we'd truly like to see largely demilitarized, only this time think of it as though you were Vlad Putin.  It's where he gets to station his bombers, his warships and his long-range cruise missiles on the polar equivalent of our doorstep.

Maintaining any significant military force in the polar region isn't easy. That's why Russia has already developed a floating nuclear power plant, a reactor on a huge barge, and within five years plans to deploy smaller, air transportable, nuclear reactors on tracked chassis that can power entire military bases.

Not surprisingly, Justin Trudeau is being lobbied by Canadian defence experts to sign on to America's ballistic missile defence programme and get NATO more committed to Arctic defence.

Face it. The post-Cold War era of peace is pretty much over. We saw to that when we marched NATO to Russia's borders. As the current head of the International Crisis Group, Jean-Marie Guehenno, puts it, "the threat of big war is back."

Good luck, Justin. Tough decisions lie ahead.
Posted by The Mound of Sound at 9:54 AM