What Brad Wall Would Prefer You Ignore

Alberta's Rachel Notley has vowed to shut down her province's coal-fired power plants and implement meaty carbon pricing levies. Her colleague next door, Saskatchewan's Brad Wall, is already squealing like a pig, whinging about how slashing his province's greenhouse gas emissions and transitioning to a clean energy regime will ruin Saskatchewan's economy.

Here, courtesy of the National Observer, is a graphic that tells you all you need to know about the provinces' electrical energy generation. Dirtier even than Chins? You betcha. 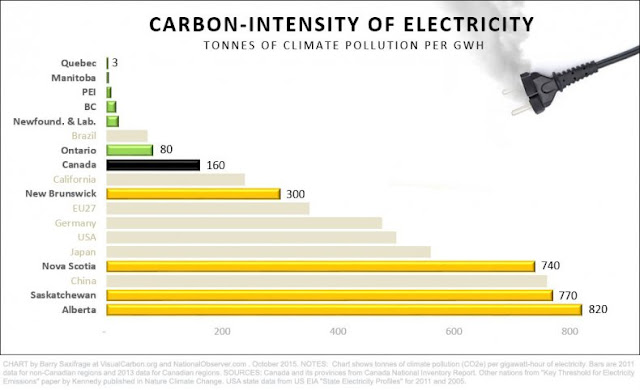 As you pointed out on a different thread, government scientists can now speak up. Brad Wall is now going to have a difficult time pretending.

Anyong said...how does Alberta affect Sask economy by cutting coal use in Alberta. Here 12%of the population suffers with allergies from coal use and are always using health care. And since when does Alberta guide Sask's work force.

I have to applaud BC and Quebec, in this chart. Wow. Even combined, with a comparable population to Ontario, these two provinces don't emit even half the pollution of Ontario.
By all rights, with its size and population density, Ontario should be Canada's worst offender. And it's numbers aren't even terrible, and have been steadily improving.
But for the petro provinces to be this awful, each individually emitting worse pollution than entire nations, is awful. It's tragic. It's criminal.
What's worse, in comparing terrible economic commodities of the past, such as CFC's, lead, and asbestos, is it could very well take decades to phase this sort of activity out of the economy. And these provinces aren't even ready to begin such an endeavor. Alberta's new government has made some tentative first steps, but is speaking of 2030 as a benchmark for ending dependence on coal.
I suppose 2030 is better than never, but still, Alberta in this case probably needs to learn to run before it learns to walk. Perhaps it needs to learn to fly even before all that.
At this point in time of human history, what will save us from perishing is learning how to dream big.
We're at a tipping point. Safe, now, is death.
The Alberta NDP need to dream big, now. Wind and solar power from the north to the south, from East to the West. High speed electric rail, from Edmonton to Calgary, and as far West and East as it can be pushed.
Food security in favor of commodities.
Tar sands completely shut down.
We're done for. We're beaten. But at least let's go out having at least tried salvaging our lot. At the very least, let's dare to improve our chances rather than waiting in safety in comfort of what we've always done.

Praising BC and Quebec for using the hydropower nature gave them is disingenuous. Or were you genuinely unaware of this fact?

Same comments apply for the post author. I'm from Nova Scotia, and hydropower is not available in any quantity, which is why we bought into NL's Muskrat Hydro scheme. Also, we have a small population, so our effect is small.

Simply presenting facts without interpretation is pretty silly, and typical of leaping to conclusions without much justification.

I had thought that was a Conservative tactic.

Instead of wasting billion on a failed carbon storage scheme and whining about it, Mr. Wall could have been bragging about an impressive high tech and green energy system, of solar, wind and renewables, while, simultaneously, boosting the value of Sask's oil products. What a big loser, as is all of Canada.

Disingenuous? I don't think that word means what you think it means. You doubt my sincerity? I'm incredibly honest. Too much so. I want to tell you to fuck off, and go fuck yourself, but would prefer to school you. Mother fucker.
Listen, BC had the chance to join to petro carbon game ages ago. Also, it had the choice to join the nuclear mining business, too. We stuck with our treaty with the United States, and have profited enormously. We had choices, and made the best one. Our black mark would probably be even if we don't use our own coal from our huge coal mining business, we still sell a tonne of it. I'd like for BC to end coal mining.
Nova Scotia's a peninsula. Micro turbines have been in operation for decades, most notably in Denmark, where today 20% of its energy needs are met by wind power. Nova Scotia's wind resource is comparable to Denmark's, and today it only provides %10 if that. It was supposed to have %20 by now, but had failed to meet this target.
I don't know what happened there, but attribute it probably to politics. That speaks to a severe failure of leadership.
Instead of attacking me, why aren't you holding your own leadership's feet to the fire? Failures, the lot of them, right? Lib, Dips, or PC's, they've been dragging their feet for far too long. They've also been fast tracking off-shore oil extraction.
If you have the energy to spend attacking me for some supposed disingeniuity, why aren't you better spending it elsewhere, trying to make even a small difference in your own province? We can all make even a small difference, even if only in our own lives. Attacking me, attacking my words just because your feelings were hurt by them, what a fucking class act you are, huh?
Fuck off.

Darn, we Nova Scotians really need to get our tidal turbines in the water! This graphic is a bit misleading though, it seems to me it says X amount of carbon is generated per GWH. If that's the case Ontario uses far more GWH of electricy than Nova Scotia. Though it is helpful in that we should be making our electric sources less carbon intense.

@ Anon, 5:34. I guess size matters, albeit in reverse. Yes, BC and Que have the benefit of large hydro-electricity capacity and Nova Scotia supposedly does not, the Bay of Fundy is what, closed for repairs? Your province has a variety of clean, renewable energy options only coal has been dirt cheap. Whether it's hydro-turbine, wind-turbine, tidal-turbine, solar or geo-thermal, each province has options if it chooses to take them.

As for the rest of your rant, I think you've been worked over well enough by Troy so I'll let it pass.

@ Tim. I don't think the graphic is misleading, not at all. It states what it presents, emissions per unit of electrical energy generation by province and nothing more. That said, yes, it is time to harvest that free energy in the Bay of Fundy. Go for it.