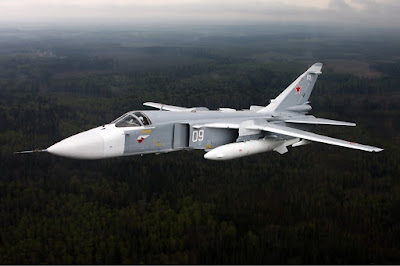 Turkish warplanes have shot down a Russian warplane near the Syrian border. Vlad Putin has vowed that Turkey can expect to find itself on the receiving end of "significant consequences."

The Turks have called an emergency meeting of NATO members that is now scheduled for 11:00 eastern time.

Putin has confirmed the aircraft, an Su-24, was downed by Turkish F-16s, calling the shootdown a "stab in the back carried out by accomplices of terrorists." At the recent G20 summit Turkey was one of the nations identified by Putin as the principal backers of ISIS.

No word yet on whether the 2-man crew of the Su-24 survived but there's a strong chance they were killed when the missiles detonated.

From bad to terrible.  Turkmen rebels inside Syria now claim to have shot and killed the Russian crew who had apparently ejected safely from their stricken plane.

Turkey's private Dogan news agency is quoting a Turkmen commander as saying Turkey brought down the Russian plane after it had dropped a bomb in a Turkmen region of Syria and entered Turkish airspace.

The fighter, who was identified as Alpaslan Celik, the second-in-command of the Turkmen Coastal Division, said the Turkmen forces had re-captured a Turkmen mountain region from Syrian forces.

Celik also said the rebels shot and killed both Russian pilots who parachuted from the plane after it was shot down.

The rebels had previously said they killed one of the two pilots and were searching for the second one. The AP couldn't immediately confirm the claim that both pilots were dead.

Ah, Jesus, that won't go unpunished.  Putin is going to have to retaliate for the wanton execution of his airmen.

It's starting to sound as though the Turks acted recklessly. From BBC News.

The Turks say the aircraft was warned about entering Turkey several times, and, when it did not change course, was shot down.

The problem is that according to a radar map released by the Turks themselves, the Russian Sukhoi could at best be described as crossing over Turkish territory.

It flew over a small piece of Turkey that projects into Syria - a tiny isthmus of land that would have taken the fast jet only a few moments to fly over.

So if the plane was shot down, as the Turks say, after entering Turkish airspace, you could equally say it was downed on the way out of Turkish territory too.

Mound, this sounds horrible. If Putin shoots down Turkish airplanes or any air strikes may lead to dangerous consequences. The involvement of the U.S and any European country may lead to a much bigger war.

My understanding is that there is a “buffer zone” in Northern Syria around 10km deep, which Turkey declared that it belongs to it in Turkey the past and considers it its own soil. It contains many Turkmen (ie. Al Nusra allies) villages, which, when you hear that a Russian fighter was downed inside Turkey, it was more likely some distance from the official border, inside this zone in Syria. So chances are that Turkey downed the fighter inside Syria with a missile fired from an F16 in this area, while the Su24M was attacking Al Nusra – and possibly a Turkish paramilitary Grey Wolves battalion – on the ground.

Also, the son of Erdogan is the likely buyer of ISIL/ISIS/Daesh oil - oil shipped via tankers that the US has been avoiding attacking until confronted by Putin last week.

It is worrisome, LD. Turkey is a longstanding NATO member, straddling the divide between the West and the Middle East, Christendom and Islam.

It doesn't help that Turkey has supported ISIS, especially at the outset of the Syrian fiasco. When the Turks did finally and very reluctantly join the coalition air campaign they used it to attack Kurdish units in Syria, not ISIS, effectively flying air support for ISIS.

Article 5 of the NATO charter obligates every member state to treat an attack on any member as an attack on themselves, a potentially volatile provision that has been recklessly interpreted since 9/11.

It's confusing in part because there are so many affected parties with such disparate positions as to invite contradiction, illogic, even chaos. The United States, Syria, Russia, the "coalition", Iran, Iraq, the nest of vipers known as the Gulf States, Israel, Lebanon, Jordan, Sunni Islam, Shiite Islam, radical Islam, ISIS, al Nusra, the Free Syrian Army, the Kurds and now, in the middle of this hellstorm, Turkey.

At worst, Russia was stepping on Turkey's toes. There's no suggestion that Russian warplanes were or ever have been targeting anything inside Turkey. Yes, I'm sure they've been provocative to Ankara but an outright shootdown?

@ UU4077 - The bloodlust is running high these days since the Paris bombings. I hope NATO officials stand firm and warn Ankara there'll be no Article 5 option on this one. Yet the Alliance leadership has been wildly bellicose toward Russia, even since Foggy Rasmussen stepped down. That Danish son of a bitch was spoiling for a fight.

I wonder how this is going to play out on the streets of Moscow.

If ever there is a time to remove our aircraft from the area this would seem to be it, It is all but impossible to tell friend from foe and this incident will make that even more difficult. I for one dont want Canada in the middle of it pretending that bombing the crap out of everything helps!

Hey, Rural. Yeah, it is coming to resemble a gang of toughs staging a knife fight inside a phone booth. I expect Putin will see to it that Su-24 bombing missions will henceforth be escorted by Su-30 fighters tricked out with air to air missiles and under orders to treat any fighters approaching from Turkey as hostile.

Mound, you are quite right about the NATO dilema. One can only hope and pray that Turkey's actions don't lead to more disastrous consequences.

Anyong said....Now is the time for Nato to seriously engage Putin. Give the man a bit of credence.

Turkey has such strong military that they could finish off both Daesh and Assad in a couple of months. It looks more and more that a plot - by those 3 ME countries with USA blessing - to finish off Assad, contain Kurds, neutralize Europe has a sub-plot: lure Russki to the quicksand...
A..non

I am very worried Mound. Why would Turkey risk an act against Russia that can cause a war and a war with nuclear weapons? What are we going to find out, that the US and possibly Britain and France along with Israel partially instigated this. It will be really bad if that turns out to be so. Hopefully reasonable heads will prevail.