The Gags are Off! 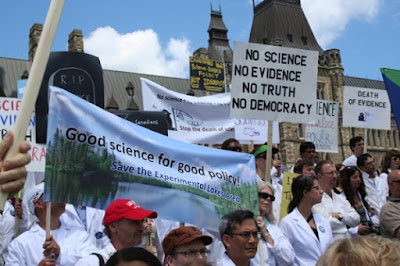 The Liberal government has taken the gags off federal scientists.

Alain Vezina, regional director of science for the Bedford Institute of Oceanography in Dartmouth, Nova Scotia, confirmed Friday morning that scientists at the institute are allowed to openly speak to media.

Vezina held a meeting this morning to brief staff on the change.

“I think it’s positive,” Vezina said. “I think we still need to work out the details. It’s very new.

"Basically what I told the staff is if you’re contacted directly by the media, let’s say you’re at a conference or a workshop, the media is there. You can talk directly. You don’t have to say, ‘I don’t have permission to speak.’”
Posted by The Mound of Sound at 11:27 AM

Wow. Letting them do their job.

Sad that this is newsworthy, but welcome just the same.

I'm sure that it also means that those who do speak to the media take the heat. Not a problem. It's a better way to do things.

This policy also means that Canadians at large are going to have to be more open minded and maybe get a bit more education. Burying ones head in the sand is going to be more difficult.

I was thinking the same thing as rumley, Mound; the fact that this is received with joy reminds us just how oppressed all of us felt under the old regime. It must be like the drowning person feels upon being pulled to safety: the first breathes of air are sweet and intoxicating.

That's right, Lorne. I read an item on CBC's web site about Trudeau being swarmed by public servants. It sounds as though their workplace morale changed markedly in just two days.

Speaking of that I wonder what's going to become of Harper's Brigade of Minders, the North Koreans who used to accompany federal government scientists on their outings to ensure they stayed mute. Perhaps they can be transferred to the RCMP facility at Rockliffe Park to dung out the Musical Ride stables.

yeah Mound I wonder what happened to all those swarms of minders, and PR spinners, and Internet blogger/commentator shills. I mean thats alot of jobs, ALOT. The next few days when Harper had lost, I noticed a marked difference in how many conbots were out, none,I would guess. The comments that were left, were rational, reasonable and lacked that talking pt fakery.
and for Trudeau releasing the scientists and civil servants, good for him. This new PM has exceeded my expectations in the few days he has governed. Getting us out of the war, rethinking the F35's, looking at passed bills, talking to the press, allowing the scientists freedom, hiring more scientists, and doing it because its right.
and he seems committed to undoing all the damage harper wrought.
Good for him and his team.

Let's not give Trudeau too much credit for the easy things, Deb. It's the harder things that need changing that will be the measure of his leadership. Like you I'm delighted with things he's already done but most of them were achieved with the stroke of a pen.

Difficult, even immense challenges lie ahead. Restoring social cohesion, uniting a deliberately divided Canadian society, will be a Herculean chore but essential to the well-being of the Canadian people as they progress into this vexing century ahead. Taken in all of its many dimensions that is by no means pushing on open doors.

Justin will fail us no matter how hard and honestly he tries because he can't win them all no matter how much we expect that of him.

yes I truly can see that, and its going to be hard to please the masses in the next few years. He has alot on his plate.