Hollande's Turn to do the Terrorists' Bidding. 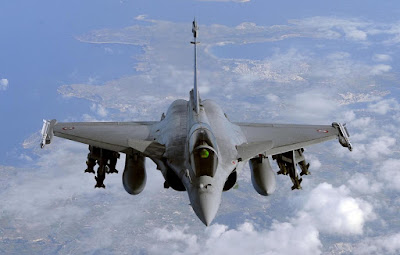 In the wake of the Paris attacks, president Hollande ordered a French bombing campaign against the Islamic State's 'headquarters' in Raqqa, Syria. In The Guardian, Jurgen Todenhofer writes that Hollande is playing straight into the terrorists' hands.

The Syrian city of Raqqa, which is now populated by only 200,000 citizens, has become one of the favourite targets of the French president, François Hollande. American, Jordanian, Russian and Syrian military jets have been reinforced by French bombers. British ones could soon be joining them, dropping their deadly load on what remains of the city’s foundations – even though out of 20,000 Isis fighters who used to hide in the city, only a couple of thousand remain at most. The majority have long ago fled to Mosul, in Iraq, or to Deir Ezzor, also in Syria.

France is currently bombing everything that looks like camps or barracks: small factories, communal buildings, hospitals. The majority of the Arab world has seen photos of dead children in Raqqa – Isis is doing everything it can to spread them. And for every murdered child, there will be new terrorists. War is a boomerang, and it will come to hit us back in the form of terrorism.

Of course, Hollande has to react. But no one is stopping him from reacting with a bit of brains. As a head of state he should know that urban guerrillas cannot be defeated with bombs. He should know that Isis fighters only march in tight orderly lines or drive in convoys in their propaganda videos. Off camera, they avoid hanging around in large groups and spend their time among the local population, preferably in apartment blocks that house families. That’s the very first chapter in the dummies’ guide to terrorism.

In October 2014 I was the first western journalist to spend time with Isis and return safely. During my stay, we were repeatedly targeted by American fighter jets and drones. It’s hard to overemphasise how quickly our Isis escorts managed each time to disappear among the local population. While driving through the territory of the “Islamic State” with three cars – one of which was usually a decoy for the drones – there was always a 10km distance between the vehicles. We frequently switched positions. The mantra of the Isis fighters was: never be a target.

A bombing strategy employed by France – which, potentially, will now be joined by Britain – will above all hit Syria’s population. This will fill Isis fighters with joy. Hollande could only make them happier if he were to send in ground troops as well: western boots on the ground in Syria is the ultimate Isis dream. Instead of mainly killing Muslims, they are desperate to live out their imaginary apocalyptic showdown between good and evil, in which they can at last fight against the US, the UK and France – on the ground.

Todenhofer suggests a few things that might actually undermine ISIS.

America has to stop Gulf states delivering weapons [and funding] to the terrorists in Syria and Iraq.

...Isis can only exist because it has managed to ally itself with the suppressed Sunni population of Iraq and Syria. They are the water that carries the Isis project. If the west managed to bring about a national reconciliation in Iraq and Syria, and integrate Sunnis (which in Iraq would have to include former Ba’athists) into political life, Isis would be finished, like a fish out of water.

Is it really so hard to see that the attempt to defeat terrorism with wars has failed? That we have to rethink the war on terror? That we have to finally start treating the Muslim world as true partners, and not as a cheap petrol station we can raid when we feel like it? Bombing civilians will recruit new terrorists. Again and again.

We need to focus on what has radicalized so many young Muslims in the Sunni population. What has taken their hope? Could it be our support of vicious, despotic, pro-Western regimes that brutally suppress their own people - the very outfits we call our allies? There's a reason Israel also backs the Saudi princes and Emirs and the generals of Egypt and it's not to advance the welfare and aspirations of those Arab populations.

We kept those slugs in power, let's end that. The best part is, it's easier to take them down than it is to defeat radical Islam.

France was also the main instigator of deposing Gaddafi. I am sure that those who issued directives knew perfectly well that Libya would became a failed state...
A..non


What would France have to gain by creating a failed state out of Libya knowing that an Islamist bunch such as al Qaeda or ISIS would exploit that to get established in North Africa?

Nothing, Mound.
The forces hiding in the shadows are the beneficiary.
You are a Lawyer... Invoke "Qui bono"
A..non