There's Always One Guy Who Spoils It for Everybody 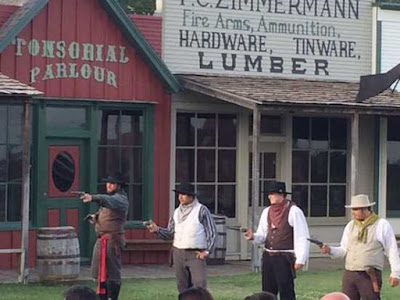 In this case "it" was a re-enactment of the legendary Shootout at the OK Corral. The Spoiler was the guy who showed up with a six shooter loaded with live rounds. Oopsie!

Two people were wounded in the incident on Sunday afternoon at the old town of Tombstone, Arizona.

Ken Curtis was struck in the upper-groin area. Curtis fell to the ground and was flown to a hospital in Tucson, where he underwent surgery to remove the bullet.

Other rounds struck businesses and a female bystander.

The marshal says authorities inspected the weapon and found one live round in the cylinder along with five casings that indicated the six-shooter was filled with live rounds prior to the skit.

It seems the errant hombre, Tom Carter, showed up late for the gig and didn't have time to have his guns inspected. The group has been staging these re-enactments since 1946.

If Americans want to use live ammunition during their historical re-enactments, that would be a good thing for humanity.

How ungracious of you, Anon.

Is he a Republican candidate too?