Now that Harper's Gone, the University of Calgary Comes In for Scrutiny 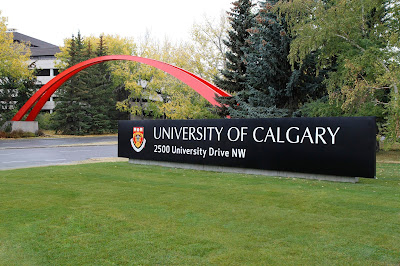 Over the past decade the University of Calgary became a regular source of rightwing advocacy. At times it seemed like Canada's answer to the University of Chicago. There were a number of world-class, courageous academics but, during Harper's reign, the university also became a favoured bastion of the energy giants, especially Enbridge, and shady characters such as repeat jailbird/Harper confidante Bruce Carson.

Eventually the stench of bitumen-laundering overwhelmed the hallowed halls of foothills academia, sending some of UC's best and brightest fleeing in pursuit of academic integrity south of the border.

Two of these top-drawer academics have come out to expose what sent them packing. In September, David Keith, now professor of public policy at Harvard, wrote a piece in the Toronto Star chronicling how Bruce Carson and his Ottawa funded Canada School for Energy and Environment were welcomed into the university.

"It soon became clear that Carson was simply using his academic post to further the interests of the conservative government and a narrow segment of the energy industry. Documents released by the RCMP contain emails and interviews making it unequivocally clear that Carson worked closely with industry leaders to produce meetings and reports that had the patina of stakeholder representation, while in fact aiming to avoid meaningful public debate.

"Leaders of Alberta’s universities did nothing substantive to manage the problem until Carson’s scandal forced their hands. Even then, they failed to act decisively to ensure that public money was used for research that supported broad public interests."

CBC News has a report today of another leading academic, Joe Arvai, and what drove him to leave the University of Calgary. Professor Arvai's sage revolves around pipeline giant, Enbridge, and the Enbridge Center for Corporate Sustainability.

The story of the Enbridge Centre for Corporate Sustainability covers a short and troubled two-and-a-half years that ended in the fall of 2014.

In that time, documents obtained by the CBC reveal a university bending over backward to accommodate the apparent public relations ambitions of a corporate patron.

Along the way, concerns about academic independence, the role of university research and the credibility of the researchers were dismissed.
...Faculty members, such as business professor Harrie Vredenburg, described Enbridge's influence at the university as a classic case of "he who pays the piper calls the tunes" in an email complaint to Waverman on Aug. 26, 2011.

...The pairing, though, was fraught from the start, and one of those who felt that way was Joe Arvai, the young academic – a rising star in the area of organizational decision-making – who had been brought in to head the new venture.

...From the outset, though, Enbridge's hands-on approach to the new centre troubled Arvai, according to the email trail.

Beyond naming rights, Enbridge sought to influence board memberships, staffing and the type of students that would be considered for awards, the emails show.

...In a Jan. 3, 2012 email to Leonard Waverman, the dean of the Haskayne School of Business at the time, Arvai wrote: "I am not sure what we are signing up for. I have the impression that Enbridge sees the centre as a PR machine for themselves, whereas I see it as an academic research centre.

"In the latter case, it's likely that finds of academic work in the centre will not, at times, paint industry — including Enbridge — in the best light. I'm not sure that Enbridge understands this."

The dean responded that he did not understand Arvai's concerns.

At one point the dean told Arvai in a voicemail message, "If this goes belly up my ass is on the line and I won't feel happy with you either on this."

...Increased corporate sponsorship, however, also means that appropriate protocols must be in place to protect researchers and the public interest.

When it comes to the Enbridge Centre, questions remain about whether the university's administration — and U of C president Elizabeth Cannon, in particular — did enough to safeguard these concerns.

Emails show that Cannon was aware of the problems at the Enbridge centre before and after its launch in 2012.

But her emails at the time show she was intent on keeping Enbridge happy, especially considering the company had in the past given more money to the University of Alberta in Edmonton.

...When it comes to Enbridge, Cannon also has her own potential conflict of interest by virtue of her being an independent director of Enbridge Income Fund Holdings, since late 2010. She has disclosed this position. Last year, her board compensation from that position amounted to $130,500.

When it comes to academic independence a university ought to be like Caesar's wife - above reproach. The departures of David Keith and Joe Arvai plus all the records and documents the university had to disclose at the very least call the University of Calgary's integrity into question.

In so many ways this seems emblematic of the culture of the Decade of Harper.,

Thanks, Anon, I stand corrected. I was trying to come up with a generic description of his profession that laity could grasp. "Limnologist" isn't colloquial.

.. the Harper fallacies are certainly entrenched at University of Calgary, Mound.. Just take a walk along the curious backtrail of that 'Distinguished Fellow' Tom Flanagan.. To buttress your premise, one only has to look at the case history regarding faculties at Penn State University.. no no, not the football Faculty of Joe Paterno.. but the ones that sold out or were created solely to generate favorable 'studies' regarding Fracking. The Big Energy money came in and the science blew out the window. Suddenly papers were being published validating the geomorphology as impervious to methane or boron upward seepage. Discharging Fracking fluids down abandoned wellheads was A-OK. At the State level, legislation could proceed to 'protect' natural gas entities from having to reveal what they were injecting along with fracksand silicates. The fracking sand of course is like depleted uranium is to military.. its only dangerous to those exposed to it.

Its hard to believe the levels that Stephen Harper et al have penetrated or toxified with 'god on their side' .. Without equally thorough forensic history.. contemporary incisive journalism, whistleblowers, indy writers, artists, First Nations & angry concerned capable citizens Canadians will only get a wiff of what has to be pried out, excised, revealed, fumigated, turfed, healed or mitigated.

The 'Canada' that only Stephen Harper & Laureen 'recognized' needs to be contained in a reinforced glass exhibit case.. examined by students, biologists, historians & environmentalists.. diplomats & journalists. To think that creeps like Kenney, Poilievre, Rempel, Hamilton, Novak Byrne, Lecce, Nicholson et al may still carry a torch for such diseased deceptive & destructive dogma is discouraging.. to think such idiocy may still thrive in our higher education centers is demoralizing.. disgusting.

Do any of these Universities have an 'Ethics' or 'School of Non-Partisan Canadian Values' Faculty ?

The Neoliberal communication infrastructure Mound seems extensive. Along with the Univ. of Calgary, it includes the majority of think tanks and the corporate media.Because the Neoliberal mandate was so entrenched and had control of the message in Canada, Harper assumed he was a shoe in for another majority. Canadians ignored all of the neoliberal propaganda and voted Harper out. I think this is why so much of the international community, especially those countries with right wing governments are focused on trudeau's win. They want to know how Canada threw out their right wing 9 yr gov. and gave a third party a left of centre party, the liberals, a majority. I'd be curious what conclusions they come up with. Mine is that more Canadians made a point of voting, but more to the point, the majority of Canadians are not politically nor culturally right wing nor are they religious fundamentalists. They are progressives, presently more liberal then NDP.

Sal, you can take Christy Clark off your list. She never 'made the grade'. And she obviously never took a course in Ethics.

@ Sal - I think what the University of Calgary problem argues for is the need to restore public funding to Canada's universities in order to suppress corporate influence/control.

@ Pamela - I'd like to believe that Canadians "ignored" the forces of neoliberalism in the last election but I think we have been to some extent conditioned over the past several and, especially, the last decade, brought into line if you will with the tenets of neoliberalism. I think we're less likely today than we might have been in the 70s or 80s to recognize the contradictions and inconsistencies in the neoliberal mantra.

One aspect, for example, is how so many of us have been transformed from "citizens" into "taxpayers" and, in the process, removed from the public debate beyond who matters impact our wallets.

Another neoliberal triumph has been in getting working class Canadians, blue and white collar, to support capital over labour and accept the decline of unionism. Most Conservative voters are not hedge fund managers or CEOs. And look how readily we have surrendered to corporatism in all its guises even though it is an inevitable precursor to the decline of liberal democracy.

I think most of us, Pamela, have a very shallow grasp of the extent to which we have been conditioned, relentlessly but subtly, to the neoliberal fold. That is a major reason why I curse the Layton/Mulcair NDP for abandoning the left, fleeing the fight.

Your right Mound. Actually I think Canadians not so much ignored the Neoliberal message from the MSM, they just ignored the MSM. As you outline the different examples of Neoliberalism that Canadians surrendered to, I would like to know more of how these were presented to Canadians, particularly corporatism. I have some idea through reading, but need to find out more, as it is the crucial key to understanding how the Neoliberals have succeeded in having their policies accepted and implemented by governments in the last 50yrs. I think what is predominate in having people accept Neoliberalism is the over all decline in intellectual inquiry. That may make me sound like an arrogant snob and I some times ask myself if that is what I am being, but a country of citizens who intellectually coast, don't really ask to many questions. This makes it easier for anyone with a political agenda such as Neoliberals to have their ideas front and centre, thus becoming the ideological driving force,
entrenched in the countries infrastructure. No questions asked! Sometimes I feel that with Neoliberalisms dominance, living free and democratic, is living on borrowed time.There does not seem to be anyone challenging Neoliberals hold.