The Guardian's Obituary for PostMedia 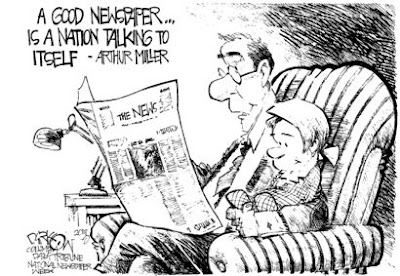 Did the shameful performance of Canada's major newspaper chains sound their deathknell? Have they so broken faith with the Canadian people that the days are numbered for would-be media giants such as PostMedia? According to The Guardian, Canada's corporate media cartel may be on its way out.

The most common prediction ahead of last month’s Canadian election was that the country’s many polling firms would again fail to predict the results. In the event, most of them accurately foresaw Justin Trudeau’s Liberals sweeping into power. Instead, it was the country’s daily newspapers that got it wrong, promoting the incumbent Conservatives while readers and voters turned en masse against the party. Social media pounced on the striking disconnect with increasing ferocity as editors in virtually every Canadian city and town published tortured endorsements of Stephen Harper’s government.

Yet the defeat was a particularly brutal blow for Canada’s dominant chain, Postmedia, which publishes more than half of the traditional daily newspapers in English-speaking Canada and all but a handful of those that matter. Postmedia achieved its market dominance in step with the rise of Harper’s Conservatives. Its support for Harper was widely seen as an expression of the company’s will rather than editorial judgment. One columnist at the Postmedia title the Edmonton Journal wrote on Twitter that owners rather than editors had decided which party to back.

The company’s chain-wide blitz supporting Harper culminated a few days before the election when virtually all Postmedia publications replaced their front pages with a pro-Conservative advertisement masquerading as an official notice from Elections Canada, the independent agency managing the vote.

...The company has halved its workforce from 5,400 to 2,500 since it first arose from the bankruptcy of a predecessor chain in 2010, gutting newsrooms in response to falling annual revenue. It has lost money every year since, most recently posting a C$263m loss on revenues of $750m for the year ending August 2015. Despite that, it continues to expand, having recently swallowed up the rival Sun chain of tabloid newspapers to give it a near-monopoly position in the print advertising markets of all but three English-speaking Canadian cities.

Postmedia has been able to expand despite its dire financial condition thanks to a succession of high-interest loans from US financiers led by Golden Tree Asset Management, a hedge fund that specialises in the debt of distressed companies. Paying Golden Tree rates ranging from 8.25% to 12.5% on what is now $650m in debt, Postmedia has sent more than $60m annually in interest payments to New York even as revenues collapse and losses mount.

“I don’t think they care much about the economic viability of these newspapers over the long run,” says Dwayne Winseck, professor of journalism at Ottawa’s Carleton University. “They’re just riding this thing down and milking what they can out of it until the papers disappear, except for maybe a handful. It’s a pretty lousy situation.

...The Harper government did not challenge the foreign takover of Postmedia, despite longstanding tax rules designed to ensure the country’s newspapers remain in Canadian hands. Earlier this year, the federal Competition Bureau approved Postmedia’s acquisition of the Sun papers, saying the new near-monopoly “is unlikely to substantially lessen or prevent competition”. In seeking permission for the takeover, Postmedia assured the regulator that its newspapers would pursue independent editorial policies. Mere months later they were predictably backing Harper’s Conservatives. The company is led by Paul Godfrey, a former Conservative politician and powerbroker from Toronto who has said he expects the chain to be sold to a wealthy businessman more interested in political influence than profits.

However, a decoupling of Postmedia from the political establishment could benefit the wider media ecosystem in Canada. “[The federal government] should stop trying to play handmaiden to owners who have made a hash of the business they’re in,” Winseck says. “These folks have been going on acquisition sprees now since the late 1990s, and they’ve been doing this at precisely the time we need all hands on deck to deal with the rapidly changing media.”

Overnight I kept coming back to Arthur Miller's observation, the caption of the cartoon atop: "A Good Newspaper is a Nation Talking to Itself." In just nine words I think he might have diagnosed the terminal affliction that has spread through modern newspapers.

Today's newspapers aren't conversations. They're corporate messaging. PostMedia's shameless "partnership" with the Canadian Association of Petroleum Producers is an extreme example but illustrative of what goes on regularly albeit in more subtle fashion.

In the Sun chain or the PostMedia pack we aren't talking to ourselves for, after all, we are the nation. The corporate media cartel is not "of us." It is "of them" and it is using, no abusing, its dominance to lecture us, scold us, manipulate us.

The Guardian article reveals just how terribly pernicious has become the partnership between the corporate media and high political office holders, how the corporate media, in a transformation befitting Jeckyll and Hyde, went from the watchdog of government to the government's lap dog, both sides shifting their allegiance from the public to each other for their mutual, symbiotic advantage.

Foreign ownership? No problem, approved. A monopolistic merger of the two largest newspaper chains? No problem. "Don't worry, we'll take care of the federal Competition Bureau, we own it. It does as we say."

We're told that newspapers are dying. If so it's by their own hand. They saw fit to abandon their responsibility as the Fourth Estate to pursue a path of influence peddling. They commodified information, polluting it with messaging directed to benefit or harm particular interests and promote or undermine targeted viewpoints. They commodified it so that thereby they would have a value-added product of merchantable and proprietary value. And with it they sought to corrupt the national conversation.

I am becoming less convinced that the 'day of the newspaper' is over. The day of these newspapers is certainly over and that can only be a good thing.

As Miller so sagely notes, a newspaper is the vehicle of a national conversation and the need for that is, if anything, greater than ever. It's been withheld from us for so long that we've come to see the notion of a Canada without the Sun papers or PostMedia broadsheets as tragic. It's not. It is an essential part of renewal. It is how we go ahead.

For the record, Mound, my paper, a non-Post Media publication, The Toronto Star, was one of the few that did not endorse Harper. It continues to keep its integrity intact, surely an outlier in these times.

Hi, Lorne. I've incorporated my thoughts into a rather generous "update." I would appreciate your thoughts.

I think you capture the overweening hubris that defines the Post Media chain here, Mound. The fact that their hectoring us with their corporate messaging is likely one of the key reasons they are losing so much money seems to be lost on them. The only unfortunate thing about their demise, when it comes, will be the fact that they will be taking so many formerly good and independent papers with them thanks to the media concentration they have been permitted.

I am still one who likes to read a physical paper (The Toronto Star), but I hardly limit myself to it for the information I seek. It surprises me to some degree that the corporate press still seems to act like it is the only game in town. Soon, they will be paying a very heavy price for that indifference to the alternative media, in that they don't seem at all interested in competing with it.

I think the sooner they're gone and, with them, the scribes who have sullied what little integrity they ever had, the better.