Poking the Russian Bear with a Sharp Stick Might Not Turn Out Well. The Czar and the Sultan. 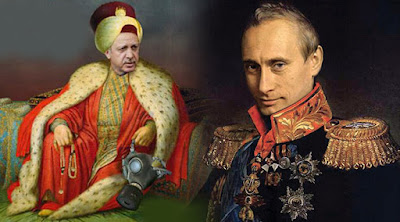 Turkish president Recep Erdogan has thrown fuel on the fire by claiming he personally ordered Turkish jets to shoot down the Russian Su-24 bomber on Tuesday.

The facts strongly suggest this was a setup.  Even by Turkey's account the Russian warplane was in Turkish airspace just 17-seconds. The profile it was flying left no doubt it was not hostile, to the Turks at least.

The Turks - make that president Erdogan - set this up to ambush the Russian bomber.

It's no simple matter to make a fighter intercept in these circumstances. It takes time, positioning, geometry. You pretty much have to be in a firing position, your missiles armed and ready, as soon as the target plane enters your airspace if you've only got 17-seconds to destroy it.  That means you have to get set up well before the target reaches your airspace.

It speaks volumes that the Russian warplane crashed well inside Syrian territory. It could not have been very far inside Turkish airspace when Erdogan's fighters fired on it.

In 2012, the Syrians shot down a Turkish jet which had entered its airspace, and Erdogan’s furious response at the time was that “a short-term border violation can never be a pretext for an attack”.

(At the time, Nato secretary general Anders Fogh Rasmussen called it “another example of the Syrian authorities’ disregard for international norms”. There hasn’t been a similar critique of Ankara.)

While the overt clashes may be headed off by the usual machinery of diplomacy, both countries – with large, extensive, secretive and brutal intelligence apparatuses and a history of working with both gangsters and terrorists – may well instead simply transfer these tensions to the covert arena.

In Syria itself, the Russians are likely to put greater emphasis on attacking those groups under Ankara’s patronage. A strike on a Turkish aid convoy may be the first manifestation of this.

Meanwhile, the Turks will presumably arm and encourage those groups most able to give the Russians a bloody nose.

In this way, what wasn’t really a proxy war before is likely to become one.

This is a conflict that Ankara triggered and while it is being managed it is not going to go away. Nor is it just going to become another chapter in the histories of Russo-Ottoman rivalry. Expect to see this play out in snide, deniable, but nonetheless bitter actions for months to come.

Well the Russians do have a thing for revenge well chilled. Some day you may read about something untoward befalling a former Turkish president as the old man sat sipping sweet tea in a beautiful olive garden.R
Posted by The Mound of Sound at 10:48 AM

Perhaps it would be in order for you to discuss the lust for supreme power Erdogan has exhibited as President of Turkey, and why the EU has wanted nothing much to do with that country joining them.

Just two months ago now, following an election in June in which the ruling party was dumped, Erdogan rebelled at the thought of his ascent to virtual dictatorship being stalled, and called a new snap election. I have no idea how he managed that, not knowing Turkey's governing rules. Having lectured his countrymen on fearing and more fear, much like harper did here, the old "Big Daddy will look after you" schtick, they meekly acquiesced and restored his boys to power just earlier THIS month.

Thus equipped, and swaggering about in triumph, it is no wonder he wanted to show his people what a big man he is. Trouble is, having mush for brains, he decided to take a pot shot at Russia, and the whole country will suffer for his megalomania.

Listening to his ranting today about "the whole world knows Turkey is right", and you get some idea of what a complete nitwit he is. It's unlikely he'll get to retire years from to smell the roses. His career is likely to come to an abrupt end soon at the behest of Vlad the Impaler if he doesn't shut his trap. Just sayin'.

Anon, the Turkish military has a habit of removing leaders who get delusions. Turkey is unusual in that the generals will let democracy muddle along until it doesn't and then they will step in until the politicos sort it out. My guess is that Erdogan may have to salute soon.

Turkey has some tough (to be polite) neighbours. It also has a large minority of Kurds, most of whom get along. There is a contingent of rebellious Kurds who want to carve a chunk out of Turkey (and Iraq and Iran and Syria) which makes the homeland Turks rather testy.

Geography is always an issue. Much of the water that flows south originates in Turkey. With drought expanding in the ME expect the Turks to do more to keep the water. Of course, the Kurds are well aware of this.

In some ways, Russia put itself into the middle of a local issue.

It's hard not to see this as the latest chapter in Great Game II that's been underway since the Russians moved into Afghanistan. Wheels spinning within wheels. Each side, there are at least four, pursuing its own agenda that can shift fairly quickly in response to changing realities on the ground.

Imagine what that whole ME/S Asia region would be like if we all transitioned to alternative energy tomorrow. With no despots for the West to prop up for the sake of geopolitical control of the region's oil, the Arab street would toss those bastard sheikhs, emirs and princes. We would focus on securing the Suez and, for a while at least, defending Israel and let the Muslim world sort itself out as the impacts of climate change set in.

Mound said, "Imagine what that whole ME/S Asia region would be like if we all transitioned to alternative energy tomorrow."

There would be even more refugees. Most of the ME is desert which won't support the present population. To a great extent, people are fighting over the fertile places.