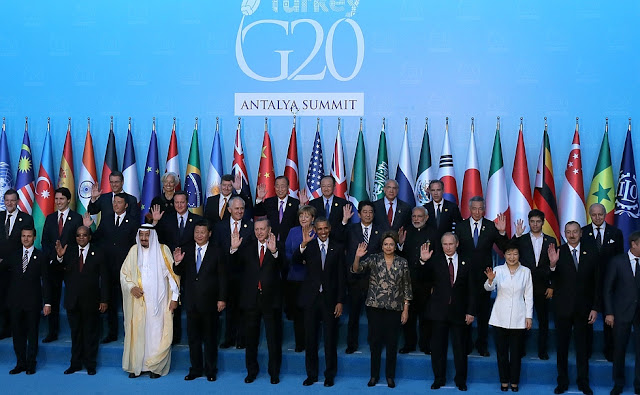 This is certainly awkward. The West's favourite Bad Boy, Vlad Putin, brought some interesting info to the G20 summit. He brought intelligence data naming what he claims are the 40-countries that are funding or aiding ISIS. Some of them, according to Vlad, are members of the G20. Oh, yes, I think I see one right over there.

What's so infuriating is that Putin didn't let any cats out of the bag. We, the Five Eyes nations, also know full well many of those countries backing ISIS and we haven't done a damn thing about it. We would rather wage wars of gestures, dropping bombs on pickup trucks out in the desert.

Stephen Harper knew and yet he still greased the deal to sell $15-billion worth of Canadian built armoured fighting vehicles to one of the ISIS patrons. It's beyond hypocrisy. In my opinion it's borderline treason.

Update: I thought I'd cruise the mainstream media sites for their accounts of Putin's G20 presentation. Can't find it. Ain't there. Putin outs G20 members and two score of nations in total that are facilitating the flow of under the table money to ISIS and our editors spike the story. Hmm, I wonder why that is? Could it be that we'd rather not dwell on those Gulf State sheikhs and princes propping up murderous Sunni Muslim extremists? Could it be that we're afraid of opening a political can of worms by observing ISIS is being commanded by a number of ex-Iraqi army generals the Americans threw out of their jobs? Do we have some reason for not interdicting truck convoys by which ISIS exports their stolen oil?

There's a graph of the relations between the players in the Daily Kos blog at the US Huffington Post. My confused attempt a couple of days ago was certainly incomplete.

Apparently he also presented pictures and other evidence of oil convoys (ISIS's continuing source of revenue). Shortly after, the US (which had up to this point refused to attack such convoys) destroyed 116 vehicles in an oil convoy.

"Oh, yes I think I see one right over there" LOL

Your post exemplifies why alternative media sources are crucial to being well-informed today, Mound.

What Lorne said by an additional order of magnitude.

There are three Muslim nations in the G20; Saudi Arabia, Turkey and Indonesia.

None of this makes any rational sense,unless you believe the whole point is to sell stuff, like arms? Seems remarkably effective in that sense.

Indonesia so far plays only a very marginal role in mayhem in ME and its state apparatus in not involved at all. My point was that Turkey bears as much blame as Saudis (who are just easier to focus on as they wear jalabiyas...)
A..non

t Turkey bears as much blame as Saudis (who are just easier to focus on as they wear jalabiyas...)

True; but Ford produces the Ford Transit in Turkey so we should not be too critical.