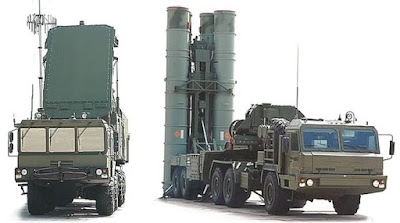 This is rapidly becoming an international knife fight in a phone booth. In reaction to yesterday's downing by Turkish fighters of a Russian Su-24 light bomber and the subsequent shootdown of a Russian search and rescue helicopter, president Vladimir Putin has ordered batteries of S-400 advanced surface to air missiles deployed in range of the Syrian border with Turkey.

The S-400 is widely considered to be the best missile of its kind, better than anything the West fields. The system can detect aircraft at 600 km. and engage them at 400 km. or less. In other words, parking S-400 batteries about 50 km. from Turkey's border gives the Russians heavy anti-aircraft coverage deep into Turkish territory.

It's unknown just yet whether the S-400s will be deployed within threat range of coalition strike aircraft operating against ISIS.
Posted by The Mound of Sound at 9:22 AM

Mound, I watched a documentary 'Fifth Estate' on CBC. It points out that Putin is a brutal dictator but caution on international stage. Hopefully he will not escalate the current situation which may drag NATO into it.

Regardless their leader's reputation, a self-righteous determination to finish off the plans of the ISIS terrorist mercenaries, their supporting cast of monied villains and regime changers, by Russia, will only grow stronger, as well as more dangerous to us all. Can't say that I disagree with Putin, but,nor shall I ever forget who actually started it all; GW Bush, Blair and Europe and all white.

Russia has also moved an area air defence cruiser to the Syrian coast.

Crikey, as soon as Turkish F-16s leave the runway they can be pinged by S-400 search radar.

Boris: Correct. The question now is. Turkey did what the Pentagon wanted - what will the US do to support and protect them.

My guess is nothing.

rumleyfips: I think Turkey is acting on its own. The US and NATO do not want a direct confrontation with Russia. NATOS entire existence is to deter such a event.

The question is what will NATO do under Article 5 if Russia retaliates and Turkey cries foul? Dangerous game.

Some comments would like Russia to allow itself to get fucked over in the area while the NATO powers seem clueless of what do to in a clusterfuck of their own making.

Russians don't support the rebels and the rebels are aligned with US interest. Good on Putin to fight ISIS and think of his strategic interests.

I haven't read a word about Turkey's erstwhile dictator Erdogan, an almost complete clone of Harper's tactics. Back in June his party lost a lot of support in elections. Livid, he called a snap election after encouraging people to fear, and got his support back earlier this month. His is an awful regime.

I encourage people to learn more about this Al Qaeda supporting country by reading this from the Independent UK.

I really enjoyed the discussion. Thanks Boris, Rumley, LD and the Anons. Let's hope we all ride this one out. I have always worried that the Article 5, NATO Charter obligation had become something of a monster in the wake of the collapse of the CCCP and NATO expansion to Russia's doorstep. We won't admit it but it was never intended to become the tail wagging the dog.

unrelated comment, but i just spent the last few minutes digging up these past posts that i remembered reading here; people may be interested after waking up to the cbc story regarding the harper government's ship acquisition program (can you actually say 'aquisition' there? or 'program' for that matter?...not sure!)

...it sure is nice waking up, not to stories of the next horrible harper insult to Canada and/or Canadians, but rather stories of the unraveling and exposing of their past corruption, incompetency and debasement!