War As a Gesture 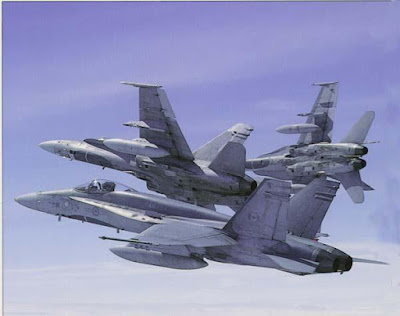 There's a miserable op-ed at the CBC's web site today by a Washington State University prof. going on about the moral implications of Canada's withdrawal from the air war against ISIS. The point seemed to be that there's a moral cost of staying but also a moral cost of leaving.

What a load of bollocks.

Our air war in Iraq and Syria was never really dripping with morality. The suggestion that we go into these adventures on moral considerations is a bit untenable when our record of supporting tyrannical regimes here and attacking despotic regimes there plainly refutes the idea. Let's face it, we have to check off a lot of boxes reflecting self-interest before we decide to bomb this country or that. The moral considerations are there, to be sure, but they're well down the page and often quite blurry.

Today we are led by the first true Permanent Warfare State in modern history. They decide who will be bombed, who will be spared and we say "ready, aye ready." A major problem with PermaWar is that it's afflicted with ADD, attention deficit disorder. Long before you could hope to achieve anything meaningful abroad you find you've lost the battle for hearts and minds at home.

We get into these things without knowing what victory means, what defeat might look like, or how and when we'll get out. The results: Libya, Kosovo, Afghanistan, Iraq should hardly be surprising. Their outcomes were almost pre-ordained.

We have yet to develop and implement strategies, or even tactics, to meet the demands of "new war." Old War, the state-on-state sort of thing our grandfathers fought, has given way to New War (also sometimes known as Hybrid War) in which the enemy can be a confusing blend of state actors, quasi-state and non-state actors comprised of governments, militias, rebels, insurgents, terrorists and remarkably capable and sophisticated criminal enterprises, each pursuing its own agenda and often featuring rapidly shifting and temporary alliances. The players can also migrate from place to place. You want to bomb here, they can get busy over there. How does a 2,000 pound precision-guided munition defeat that? If we look to our side's record for the past 15-years, the conclusion must be "poorly."

In the era of New War we always show up prepared to fight Old War, with neither the means nor the resolve nor even the intent of prevailing. That is war as a gesture, a statement and of all the forms of warfare that's certainly one of the most immoral.

In Flanders Fields my ass.


Update: this is certainly timely. The folks at Tomgram have just posted Greg Grandin's essay, "Kissinger, the Bombardier: How Diplomacy by Air Power Became an All-American Tradition."

"In Flanders Fields my ass."

Yup. I learned about war from my grandfather who did WWI and found it ugly and stupid and totally unnecessary. He had little or no respect for the fools who sent young men off to be cannon fodder. All my life I have heard from men who did war the hard way and reacted as my grandfather did, with disgust and anger. So, knowing what it's like, why do they support every new war that comes along? Why do old vets believe that the young should do their duty?

My suspicion is that there are two groups of vets, those who liked it and those who protest it and we keep hearing from those who want more.

" And the band played waltzing Matilda ". " They say ' What are they marching for , and I ask myself the same question ".

Always, always look for cheerleaders in the open and enablers in the shadows when looking at the reasons/causes of the war.
Most societies have a proverb to describe the issue, here is a Dutch one:
"When two dogs fight for a bone the third runs away with it"
A..non

Twentieth-century views of war have no place in this era, Mound. The futility of such thinking should have been obvious to even the most dense dating back to the Vietnam War. That is still being touted as a defensible strategy in the battle against ISIS should offend all who are capable of even rudimentary critical thinking.

The solutions to the world's problems can no longer be found at the end of a gun or in the dropping of bombs. Mending our fractured world requires a huge investment of time and money and the abandonment of a jingoism and economic imperialism that only promotes and encourages recruitment for groups like ISIS. And, of course, without justice for the Palestinians, the Middle East will continue to be the cauldron that it has been for far too long.

Unfortunately, Lorne, I don't see us escaping this outdated mode of warfighting despite its steadily weakening utility. We can't seem to bring ourselves to face the reality of New War, the long war and the political war, and so we continue to fight the Old War, the military war, knowing that we can't be defeated. This leads to the inevitable result of our side winning all the battles but, eventually, losing the war itself. The futility of our military policy should be obvious but we refuse to see it.

Now, after a 30-year respite, the prospect of Old War, state-on-state or peer warfare, is resurfacing. No matter that the real players have substantial nuclear arsenals, we'll arm ourselves with offensive weapons such as the F-35 anyway.

Where in hell is Mike Pearson when we so badly need him?

this may be a basic and obvious argument to you Mound and to many of your skilled and knowledgeable commenters. But I don't see war as a means to defeat an enemy anymore. All it seems to me( and I again I apologize for my global simplicity) ...is a way to sell munitions and get contracts. Politicians are the mouth pieces ( as is the media) selling it or rationalizing the acts as being moral, just... or about safety....but I just cannot buy that bilge. The money being spent( tax money) then is tsfed to the wealthiest 1% around the world.
and another is to keep the less people in line...as one day when resources are scarce...the rational for war will be directed in other locations.(today in the news...canadians, were all ecoterrorists who are stealing the water:P)
I really do think that the real justification for wars, and the endless fighting is to keep folks busy and to see how far they can push it, as there may come a time when the war is turned on its citizens, and the war machine will then have willing actors to do as their told, a media to sell it, and the weapons to do so.

Deb I'm not sure we expend much effort these days distinguishing our enemies from our friends. We condemn Iran as a state sponsor of terrorism. Yet Shiite Iran had nothing to do with the embassy bombings, the attack on USS Cole, the first attack on the World Trade Center, the 9/11 attacks on the World Trade Center and the Pentagon, or al Qaeda, al Nusra and ISIS, all of which are entirely the work of Sunnis with close ties to the Saudis and other Gulf State sheikhs and princes. Do we condemn the monarchy of Saudi Arabia as a state sponsor of terrorism? Hardly. We proclaim them our ally. Canada sells them $15-billion of armoured fighting vehicles. America sells them warplanes, tanks and artillery. The Euros sell them warplanes and warships. And we wonder why we keep getting dragged into a succession of wars incapable of end or victory.

This is a compelling reason why Canada needs to reclaim control of our military and foreign policy that have, especially since 9/11, been outsourced to Washington. They keep showing us that All the King's Horses and All the King's Men can no longer be relied upon to produce favourable outcomes much less actual victories.

Canadians are thankful to Jean Chretien for keeping Canada out of the Iraq War. We should also remember Mike Pearson who kept Canada out of the Vietnam War. Both were ridiculed at the time but both men were proven right eventually.

Where there is Empire building, with the goal of world domination, there will always be war without end.How many invasions or interference of other countries sovereignty does the US have to do, before Americans realize that their country is really an Empire, the worlds most violent bully.

All America's wars are and have been merely gestural for decades now.

War on poverty - poverty has increased and become institutionalized.

War on drugs - drug use has increased and has been assisted by interventions by the CIA and FBI, if not the State Sept and White House.

War on terror - is a foolish metaphorical war on a noun.

The fact of the matter is that the US has no conception of how to address anything, either domestic or global, other than by declaring a war on whatever it is.

The empire is devoid of both imagination and of notions of proportionality in almost everything it faces.

And this is the model that for a decade or more Canada has chosen to follow.

If JT and the LPC can't turn this page it really doesn't matter if the Conservatives defeat them in the next election.

I think JT will continue to surprise us... in good ways. I sure hope so.

He has limitations on how far and fast he can change course. Corp Canada and its media properties will not give in easily. I am hoping that Sacha is a big influence, though I think he has been well hidden to date.