The Global South is On the Move. 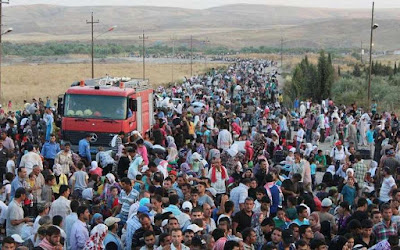 The amazing part about the migration of refugees out of war-torn Syria is the alarm it seems to be causing to so many Westerners. Here's a tip. Don't ask yourself how this is going to end. The real question is where the next wave of human migration will come from - and the one after that, and the next one, and all the rest.

People in many parts of the world realize that their ancient homelands are no longer livable or won't be much longer. To them it's time to  di di mau, get out of Dodge, head for the high ground. And, to them, that pretty much means the Western World, the Global North. They know that those who wait risk leaving it until too late.

In other words, the pre-migration world is over. This is the new reality.

As I've written often for several years, both the American and British military have studied the risks of massive migrations and see it as a huge security threat, one that must be met, if necessary, by force.  Meanwhile an article today in the Sydney Morning Herald warns that the Global South is indeed "on the move."

Egypt's 5 million or more Copts, the Middle East's last remaining major Christian sect, are deeply worried about their future in an unstable and hostile country. Ancient minority groups like the Yazidis of Iraq are already homeless, as are many small communities of Assyrian, Nestorian and Chaldean Christians from northern Iraq.

Nor is it only the Middle East and North Africa that European leaders need to consider. The Gallup Poll, based on data compiled from more than 450,000 interviews in 151 nations from 2009 to 2011, found that in Nigeria, which already has double the population of Germany, 40 per cent of people would emigrate to the West if they could. And the lesson of 2015 – for them and much of the world – is that they can.

While the flow of migrants to Europe this year already represents the biggest influx from outside the Continent in modern history, many experts warn that the mass movement may continue and even increase – possibly for years to come. "We are talking about millions of potential refugees trying to reach Europe, not thousands," Donald Tusk, the president of the European Council, said in a recent Twitter posting.

While most of the migrants have been from Syria, Iraq and Afghanistan, those who came through villages like this last summer could have arrived from almost anywhere.

Two women from Haiti and a young girl, the daughter of one of them, passed through in early October, according to officials here representing the UN High Commissioner for Refugees. They had flown to Turkey from Haiti, then joined smugglers' routes through the Balkans.

"I don't think this wave can stop," said Sonja Licht of the International Centre for Democratic Transition. "It can maybe from time to time be somewhat less intensive; we simply have to prepare. The global north must be prepared that the global south is on the move, the entire global south. This is not just a problem for Europe but for the whole world."

Asimov's warning is powerful, Toby. As we overpopulate the value of human life is discounted to nothingness. Freedom is curtailed. I wish more Canadians could read this and appreciate what we have that is relatively unique and incredibly undervalued.

This explains it in detail.

Overpopulation: the mother of all problems part 1
https://www.youtube.com/watch?v=-v0ry7uFuWk

Overpopulation: the mother of all problems part 2
https://www.youtube.com/watch?v=z1k5TcEHG0I

Sadly, everything we do to solve mass crises makes the problem worse. We have to get population under control or nature will do it for us.

Analyses from the Global Footprint Network indicate that mankind began exceeding the planet's ecological carrying capacity when we reached about 3.5-billion in the mid 70s. Since then not only has our population doubled but our per capita consumption has also swelled. This excess is labelled "overshoot."

Six or seven years ago, we entered overshoot in late October. This year we reached the point at which we consumed a year's worth of renewable resources in mid-August. Put another way, we now consume resources at a rate that could only be sustained if we had access to 1.7 planet Earths. With each passing year mankind, and every other life form on Earth, is drawn ever closer, ever faster to a pretty catastrophic day of reckoning. And the band plays on.

In terms of resources, Canada has a lousy farm policy dating back to the fifties. Eugene Whelan tried to moderate that with his supply management programs which have been all but devastated by trade deals. In the process, Canadians wound up buying staples from outside of Canada. This will be really dumb in the crunch.

Mound, in a previous thread you said that Canada does not have a population problem. I disagree for the following reasons.

1. More than half of Canadians live in cities. Most of them live within about 250 km of the US border.

2. The farther north we go the more it looks like Canada has lots of room however most of that has aboriginal claim. The days are long past when a government could shove First Nations people onto reserves and give the land to immigrant settlers. What this means is that most immigrants crowd into the cities and that 250 km band along the border.

3. The farther north we go the less habitable or, at least, the less food sustainable the land is.

Is there space for Justin's 25,000 refugees? Yes. Ten times that? A hundred times that? It could get really crowded really quickly.