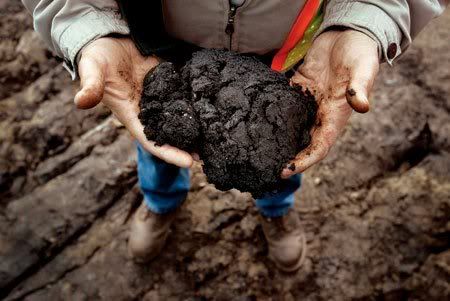 As though, following the COP 21 climate summit, there remained any argument for the continued extraction, production and export of the world's filthiest, costliest, most carbon-intensive unconventional petroleum. And, yes, that's the bitumen wealth of Alberta and Saskatchewan.

A study from the US National Academy of Sciences backs up what pipeline opponents fighting to protect the British Columbia coast have argued for years - you don't clean up a bitumen spill. You can't.

Find Report One here, "Spills of diluted bitumen from pipelines: A comparitive study of environmental fate, effects and response (2015)." A second report from the Royal Society of Canada can be found here.


Following is a statement from Anthony Swift, Canada Program Director for the Natural Resources Defense Council and lead author of the aforementioned report:

“The National Academy of Sciences is skewering the industry’s ‘oil is oil’ talking point—making it clear that diluted bitumen is a different beast altogether and needs to be treated as such.

“The agonizingly slow and costly Kalamazoo River spill cleanup in Michigan made many of these points clear. Yet, the tar sands industry has continued to insist that diluted bitumen creates no deeper environmental threat as they push for unsustainable growth. While Keystone XL is off the table, there are numerous other projects being considered that extend the unique pipeline problems of dilbit into communities across North America. These findings must inform the debate over Energy East, Alberta Clipper and other risky projects being proposed in Canada and the U.S.

“This report vindicates the tar sands campaigners across North America who have been falsely lambasted by tar sands apologists for pointing out the dangers that come with piping this bottom of the barrel petroleum. We need to focus on increasing use of safe, clean energy, rather than deepening our dependence on the dirtiest, riskiest, sources out there.“

We know that just because Harper has been tossed on the Parliamentary midden, the fight is far from over. Rachel Notley isn't going to shut down the Tar Sands and none of the political parties, including the Liberals or New Dems, supports that either.

The Northern Gateway may be dead - that's maybe as in "perhaps." I'm not sure Enbridge has given up the ghost on that or that the Libs might not change their mind either. Even if that northern pipeline is kaput, the fight goes on to stop Kinder Morgan's southern route that runs straight into Greater Vancouver's Burrard Inlet and Coal Harbour. If you want a disaster waiting to happen, that's it.
Posted by The Mound of Sound at 11:49 AM

First step might be to convince talking heads to become more precise in their reportage. They *all* still talks about Keystone as an oil pipeline.

I even went so far as to ask Rosemary Barton if she might try becoming a little more linguistically and techically accurate and start referring to it as a pipeline for diluted bitumen.

No replay of course.

I'm pretty tired of her already. I think she's another Wreck Smurfee in the making.

On Barton I agree, Dana.

Are we still on that dilbit pipeline bit? This may seem a preposterous question, but sometimes they bear fruit. Why not dismantle one of those oil starved refineries in the deep south, ship it into the heart of bitumen country (Alberta?) and make the product there? Lots of raw material, lots of room, lots of jobs - then ship the finished product around the world?
NO? I thought so. Brighter minds than mine have already dismissed that idea.

John's aghast, it is not brighter minds than yours who dismissed that idea. It is exceedingly rich people like the Koch brothers who can make more money by refining dilbit in their refineries in the US than in Canada. When foreigners make the decisions Canadians are left out.

@ John's aghast - why not build a refinery in Alberta? A couple of reasons. Alberta's GHG emissions are already far higher than any other Canadian province. Adding the amount of refining capacity required would only make Alberta's emissions performance worse.

Also, how do we flog the petcoke in Tar Sands bitumen if people are watching?