The Big Climate Change Counter-Offensive Has Begun. Care to "Ride to the Guns?" 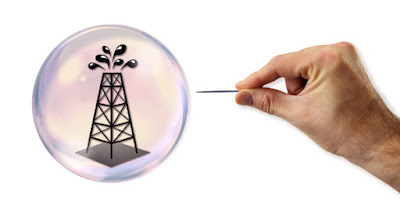 There's no guarantee that it's not already too late or that it will, in the end, succeed but there are signs that 2015 may just be the year that the battle to arrest climate change tilted in favour of the good guys, i.e. you, your kids and your grandkids.

The fight begins by defeating the fossil fuel industry's rearguard action, a battle waged with denialism and doubt. This is a fight they knew they couldn't win. They know the scientific truth of global warming. They've done their own scientific research. They've done the math. But their fight was never about winning. It was always about postponing defeat, extending the era of fossil fuels for just as long as possible. They simply adopted the template created decades earlier by the tobacco industry.

This time it's different. The victims aren't smokers or those exposed to second-hand smoke. The victim this time is mankind, civilization and the devastation is of a degree that utterly eclipses the tobacco catastrophe. The counter-attack may see the battleground shift from the media to the courtroom.

On November 5 New York State Attorney General Eric Schneiderman opened an investigation against ExxonMobil for potentially lying to the public and investors about the risks of climate change. The next day, the Keystone XL pipeline, which would have transported 830,000 barrels of crude oil per day from the Canadian tar sands to refineries near Houston, was rejected by Pres. Barack Obama and effectively killed. Then only two days later, Peabody Energy announced that a two-year investigation by Schneiderman had come to a close, forcing the company to disclose any financial risks it faces from future government policies and regulations related to climate change.

It is tempting to take the rush of recent events optimistically, especially if you have been waiting to see more concerted action against human causes of climate change. In addition to McKibben, several activists, scientists and environmental lawyers agree the world is shifting from one doused in denial to one that might take big steps in the right direction. Such news, however, begs the question: What’s behind this change of heart? “The science is strong and getting stronger,” says Richard Alley, a geoscientist at The Pennsylvania State University. “And despite great efforts by clever people over decades, no one has succeeded in finding any real problems with the science or in generating any serious competing ideas.” But what’s more likely to change public opinion, many climate scientists point out, is the extreme weather prevalent today. Whether it is California’s record-breaking drought or the fact that 2015, like the year before it, will set yet another first for the hottest year on record, people are now seeing the impacts that likely arise from climate change in their own backyards. It is no longer a threat relegated to the future and faraway places.

Not only is the public beginning to accept climate change as a real danger, they’re realizing that fighting it is a viable option. Penn State climate scientist Michael Mann points to “the remarkable growth of renewable energy” as adding to the sense that public perception is at a tipping point. Cleaner energy sources are surging so much that 2014 marked the first time in 40 years that global carbon dioxide emissions stalled, and even dropped during a time of economic growth. With the tie between economic growth and lower carbon emissions severed, the public has begun to see renewable energy as a viable alternative. Indeed, a recent Pew Research Center survey showed a clear global consensus on a need to tackle climate change. Across all 40 nations polled, roughly 78 percent of residents supported the idea that their countries should limit greenhouse gas emissions.

The perceived turning point from climate denialism to action does not appear to be a scientist’s pipe dream, either. Lawyers who work at the forefront of climate policy agree that strong science and the ability to tackle climate change are changing people’s minds. But several legal turns have also taken place. “I actually think there is a trend in public conversations and even in private conversations toward thinking about liability for major energy companies for climate harm in a way we haven't seen in many years,” says Cara Horowitz, co-executive director of the Emmett Institute on Climate Change and the Environment at the University of California, Los Angeles, School of Law. And proving companies [liable] might just be the next step toward a renewable future.


...A crucial event occurred in 2013 when researcher and author Richard Heede at the Climate Accountability Institute calculated that only 90 companies, including Chevron, ExxonMobil and BP, were largely responsible for the climate crisis. “So relatively few companies really are proportionally responsible for a pretty large share of the climate change problem in a way that allows lawyers and others to start thinking about causality in a legal sense,” Horowitz says.

Fuel was added to the fire earlier this year when an InsideClimate Newsinvestigation revealed that Exxon was aware of climate change as early as 1977 (before the oil giant merged with Mobil). The news group claimed that despite the information, the company spent decades refusing to publicly acknowledge climate change, arguing the science was still highly uncertain. It even promoted climate misinformation—in 1989 the company helped create the Global Climate Coalition to question the scientific basis of climate change concerns and dissuade the U.S. from signing the Kyoto Protocol to control greenhouse gas emissions. Had Exxon been immediately transparent about its own research, the world might have begun developing clean energy decades earlier. As such, many experts have likened these actions to the deceit spread by the tobacco industry regarding the health risks of smoking.

The key word, “deceit,” has opened up a new legal pathway to investigate these companies—New York State’s 1921 Martin Act. Because of the state’s rich history of publicly traded financial markets, the law confers on its attorney general broad powers to investigate financial fraud. “There's no law quite like the Martin Act,” says Patrick Parenteau, former director of Vermont Law School’s Environmental Law Center and the Environmental and Natural Resources Law Clinic, “[It’s] the strongest law in the country.”

Although the law is nearly a century old, it has never been used in the fight against climate change. Using it against ExxonMobil will not be based on claims of injuries wrought by global warming (like the cases in the mid-2000s) but rather on failure to disclose information that investors need to know. If more companies have to accurately disclose any risks to their bottom line, like Peabody Energy now has to do, they might no longer stand on firm financial ground. They may lose investors and customers, helping shift investment from fossil fuel companies and toward those promoting clean energy. “It's kind of a back door to influencing the behavior of some of the largest oil and gas companies for the sake of climate change,” Horowitz says.

Hey, the feds got Capone not for bootlegging or bribery or murder. They nailed Scarface for tax evasion and they sent him away long enough to put an end to his life of crime.

Legal action could become the pin that bursts the "carbon bubble." When that happens it could rapidly erase many trillions of dollars of notional wealth from global stock markets. We know that at least 80% of known (i.e. proven) fossil fuel reserves must be left in the ground, untouched. What will be the ramifications of writing off that much asset value? What of the pension funds heavily invested in fossil fuels? What of the deceit? Imagine the claims for liability against brokerages and funds for lack of due diligence, negligence or even deceit.  What of the knock-on claims, the general cascade effects?

Like it or no, the way our economies are organized leaves them without nearly as much resilience as we might like to imagine. In some ways they are a House of Cards that we've chosen to ignore so long as the cash was flowing so easily.

And in 21st century, petro-state Canada, what should our governments be doing to prepare our economy and our people to meet a potential carbon bubble collapse? What is at stake for us, for our governments municipal, provincial and federal? Have we been duped, have we been wronged? Whom should we hold accountable?

Slight change of topic. If we decide to survive, here's what the carbon budget looks like for our future generation. Pretty slim pickings. 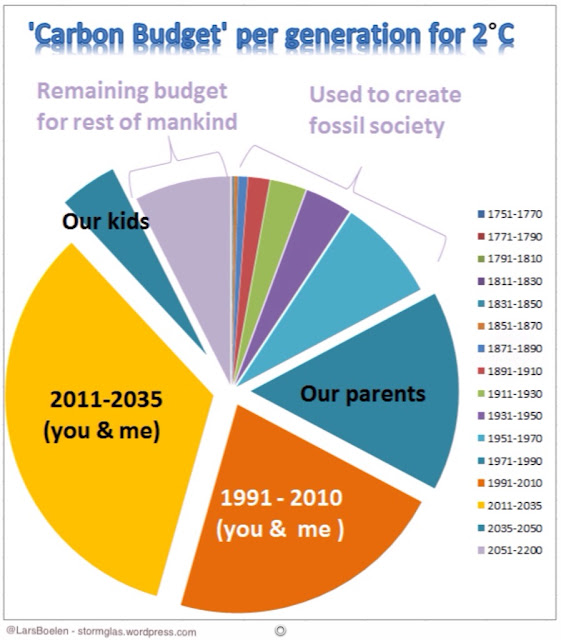 And then of course there's this.