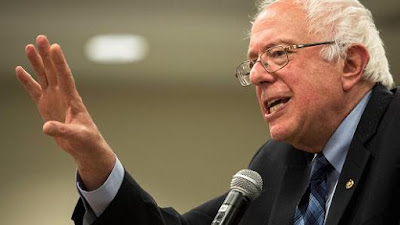 Here's your Christmas gift. Overall, the American people are not lunatics. Yes, some of them joyfully support Donald Trump's bid for his party's presidential nomination but still more of them find the loose cannon loudmouth a huge embarrassment to the good old U.S. of A.

Here's a little something for your stocking. A new poll finds that Hillary Clinton would beat Trump by a full 7 percentage points in a runoff.

The same poll found Bernie Sanders would trounce the Big Orange by a 13 per cent margin - and - a Sanders led Democratic Party would reclaim the House and probably the Senate to boot.

Funny, isn't it, Mound, how the power brokers of the Democratic Party see Sanders as a real threat?

Sanders is way better than big mouth Trump. However, I believe in general elections Clinton will beat Trump easily - latest attack against Clinton will further damage Trump. Women will not vote for Trump.

Sanders is popular in his home state of Vermont and neibouring state of New Hampshire but beyond that I am not sure.

As for as big mouth is concerned his own party is trying to disown him.

I feel for Bernie not only does he have to fight off the TP rednecks with his affinity for socialism but he has to take on the Wall St Democrats who are shitting their pants at the thought of him coming anywhere near the white house.

Hilary may move the Dems to the left but just as libs campaign on the left and govern from the right. Hilary's moves after the election will just accelerate the disconnect between the political elites and joe frontporch. Hopefully this will lead to another Dem from the left emerging to save the USA. After all Bernie cannot live long enough for us to see it but Elizabeth Warren can.

Hilary is a hawk and a wall street recipient. She isnt even remotely left, and her and trump used to be friends.
friggin america, their politics is usually right, more right, insane right and then crazy independents. How can the citizens ever get a chance to vote for change, or for the benefit of the actual people.
for once I hope American recognizes a more left... for the people kind of leader...ya know, the type Obama promised to be.
GOOOO BERNIE!!!

Have we already forgot the polls that suggested an NDP win in BC?
Or that Mulcair would be the next PM?
How soon we forget.
Polls are for wishful thinkers not realists.


Fortunately Sanders is no Mulcair or Dix. Think Podemos.

Mound, I hope you are doing well. Both you and Lorne have not posted lately. I hope you had great Christmas. All the best for the new year.

I'm quite familiar with the head to head poll you cited, but that Sanders could also have coattails enough to bring not just the Senate but the House of Representatives back over to Dem control, what exactly are you basing that part on aside from the statement of this writer? I haven't as yet seen anything that would make me believe that to be true, especially with the way the GOP Statehouses have been gerrymandering their districts to maintain and increase control over the House. I know that as of late during Presidential election cycles that the Dems have done better than they have in the off year Congressionals, but it is still a serious uphill battle for the Dems to have any serious chance at taking the House in 2016. Not impossible of course, big enough waves can well do this, but I'm just not seeing that there yet with Sanders. Sure, he appeals to more voters alienated from traditional politics than Clinton does, which is where I see that extra 6 percent coming from. It looks like 2% is from Trump, and another 2% is from left/Dem leaners who wouldn't vote for the establishment candidate but would for Sanders. Not to mention we are talking a poll with a margin of error of 2.9%, so a six percent difference barely by a few hairs makes it beyond that.

I've been watching the Sanders campaign with great interest, and it has been impressive in many ways so far, but at the same time I've noticed he has been very strong within the elements of the electorate he appeals to, but otherwise not so much. In particular his non-white support across the board seems to me to be rather thin, and especially for Dems that is of significant importance. Whereas Clinton clearly is having a much broader appeal in this regard in her support, albeit not as intensely fired up as Sanders. This is why I believe the numbers are still so strongly favouring Clinton to win the Primary, I'm just not seeing the same kind of potential to upset her like Obama had with Sanders, although I do think he is running a very strong and effective campaign. I'm also not seeing the same sort of evidence to support his having strong down ticket appeal to the Congress that I am as a potential Presidential candidate, which is why I am wondering what you were using to to back up your view that "a Sanders led Democratic Party would reclaim the House and probably the Senate to boot." beyond that one article based on that one poll.

Even if those numbers were to hold up for the Presidential ticket, there is the fact that Sander is, as he puts it himself, an avowed socialist, which I can easily see being used by GOP Congresscritters to say especially if this man were to win the Presidency American needs us in the Congress to keep him in check. The writer is presuming that a Sanders led Dem candidacy would have the same effect on the downticket with such numbers as would a long standing Dem candidate in the same position, I'm not as convinced that argument is there. Sanders until this run was always an (I), not a (D), and down there that is going to have some impacts especially on the downticket side. Given that Sanders would be fishing from some of the same pool as Trump, the idea of split ticket voting would hardly be unsurprising, or that the Sanders vote might not care so much about the downticket Dems so long as their man got in. Now, I'm not saying this is the way it would have to go, but so far there is at least as much basis to see it turning out that way as there is for doing what that article writer did IMHO. There simply isn't enough evidence to support his position yet IMHO.

Could Sanders have that effect in the end? Possibly, yes. Has there been any serious look into whether this has real teeth into it? Not that I've heard/seen yet, which is why I'm asking if you have.

Oh yes, hope you had a good Christmas and are looking forward to a happy new year!

Hi, Scotian. I don't think Sanders has a chance of gaining the Democratic nomination short of the sort of revolutionary upheaval we saw with Syriza and Podemos. It will take some sort of mass movement to overcome the hurdles that the Democratic establishment will put in his way. When it comes to Congress, the Dems are almost as compromised as the Repugs only they try to sound marginally more rational.

I'm coming to suspect that, across North America, the public has been so powerfully conditioned by the corporate media and the influences of consumerism to be incapable to standing together against anything.

A happy New Year to you, Scotian, and to our friend, LD.