Well, When You Put It That Way I See Your Point. 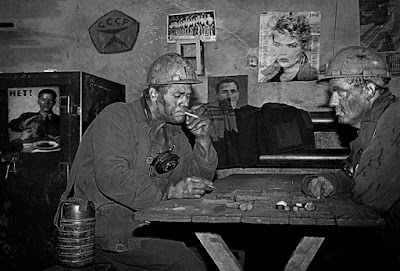 I'm not sure he wouldn't like to take his words back, if only. The head of Europe's coal lobby, a fellow named Ricketts, has said that, as a result of the COP 21 climate change agreement, his industry will be “hated and vilified in the same way that slave-traders were once hated and vilified.”

He's probably got a point there.

...Brian Ricketts, Euracoal’s secretary-general, lashed out at what he called “mob rule” by a cabal of world governments and protesters at the Paris climate summit which posed a threat to democracy itself.

“The world is being sold a lie, yet most people seem to accept the lie, even if they do not believe it,” Ricketts warned. “The UN has successfully brainwashed most of the world’s population such that scientific evidence, rational analysis, enlightened thinking and common sense no longer matter.”

“You might be relieved that the agreement is weak,” he went on. “Don’t be. The words and legal basis no longer matter. Fossil fuels are [being] portrayed by the UN as public enemy number one. We are witnessing a power bid by people who see the democratic process as part of the problem and have worked out ways to bypass it.”

Ricketts is an affable and respected figure on the Brussels lobby scene, and campaigners suggested that stress and industry desperation may have played a part in his outburst.

Brian, there's no need to fret. Just do what Big Tobacco did - ply your wares in the Third World. Flood the place. They loved cigarettes, they're going to love coal. And, here's a hot tip for you.

There's still plenty of money to be made in India. Yesterday an Indian official announced his country will be doubling its consumption of coal by 2020. Hell that's just five years away. Better start moving some of that lignite.